Gone but not forgotten. The Coronavirus pandemic has wrecked havoc on WWE over the last several months as the company looks nothing like it did back in March. Several wrestlers have been allowed to step away from the company for the time being and that is completely understandable. The health risks have scared some wrestlers away, but now one of the biggest names will be back, albeit not on your traditional show.

Out of all of the names to miss significant time from WWE, Roman Reigns is at the top of the list. Reigns has long since been one of the biggest names in WWE and that is likely to be the case for several years to come. WWE is certainly missing that much star power and it would be great to have him back. Now they will, although not quite in the way you would expect.

WWE has announced that Reigns will be appearing on this week’s edition of the R-Truth Game Show on the WWE Network. The episode, which will also feature Drake Maverick, will see Reigns answering trivia questions and going on a scavenger hunt throughout his house. Should Reigns have one of the two highest point totals for the week, he will be back for the season finale. It is not clear when the show was filmed.

The show is rather catchy. Check out how it works, plus Reigns doing something more familiar:

Opinion: I know this isn’t much but it is certainly better than nothing for Reigns fans. Whether you like him or not, there is no denying that Reigns is one of the biggest stars WWE has ever had and likely will be again the second he gets back. That isn’t a bad thing as Reigns has most of the tools you need to become the guy in WWE. I’m sure WWE can’t wait to have him back and the ans should be feeling the same thing.

What do you want to see Reigns do when he gets back? Who should he feud with first? Let us know in the comments below. 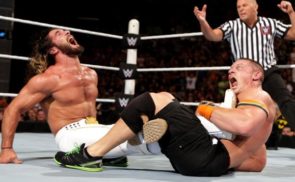