Roman Reigns’ First Challenger Will Be Someone New

You have to start somewhere. The big story coming out of Payback was Roman Reigns becoming the new Universal Champion, which came thanks to the surprise alliance between Reigns and Paul Heyman. That is not the kind of things fans saw coming and it offers a lot of possibilities for the far and near future. We may now know what is coming up soon for Reigns and the title.

Reigns won the title by pinning Braun Strowman in a match that also includes the Fiend. The ending was designed to give the Fiend sympathy and build him up as a future challenger. It is not clear when the Reigns vs. Fiend title match would take place so Reigns may need another challenger in the short term. That challenger will be determined this week on SmackDown.

The official WWE.com preview for this week’s SmackDown includes a four way match for the first shot at Reigns’ title. Sheamus, Matt Riddle, King Corbin and Big E. will face off in a fatal four way match on this week’s show with the winner receiving the shot against Reigns at Clash Of Champions on September 27. Reigns has feuded with Corbin and Sheamus before but has never faced Big E. or Riddle in a singles match.

This could go multiple ways. Check out the four potential challengers in action:

Opinion: This could work out well enough, assuming the Fiend doesn’t get involved and set up a title match for himself. I do appreciate the idea of two potential new main eventers getting their first shot at the title, as WWE needs to build up something new for the future. The title match does not exactly seem like it will be the most competitive, but a losing title shot is better than toiling in the midcard over and over again.

Who wins the match? Which one will be World Champion first? Let us know in the comments below. 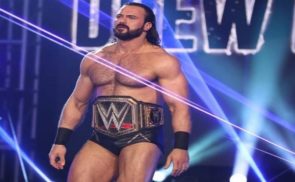