It’s another week as we get closer to Best in the World and the big showdown between Jay Lethal and Jay Briscoe for the ROH World Title. On top of that though we have the Bullet Club running roughshod over the company and pretty clearly being in line for some title shots in the future. Let’s get to it.

We open with dueling promos from Jay Lethal and Donovan Dijak about their match tonight. Dijak was tired of having to help fight all of Lethal’s battles when he was part of the House of Truth and fought back, only to injure manager Truth Martini in the process. That made it personal for Lethal and it’s time to fight.

Okada has Gedo in his corner. There’s actually a bit of a backstory here as Sydal wanted to be part of the Chaos stable in New Japan but Okada and Gedo gave the spot to Will Ospreay instead. Sydal has to escape an early Rainmaker attempt with a hurricanrana and the threat of a dropkick has Matt holding the ropes to get us to a standoff. Now it’s Sydal heading up top but getting caught by a great looking dropkick to send him to the floor and us to a break.

Back with Okada pounding on Sydal’s back, much to Gedo’s approval. Sydal gets in a few kicks and scores with a standing moonsault for two. Okada throws him right back down though and drops a top rope elbow, only to have Sydal duck the Rainmaker. The shooting star hits knees but Sydal slips out of the tombstone. Sydal misses his jumping knee though and the Rainmaker gives Okada the pin at 10:03.

The Bullet Club is ready for the winner of the Best in the World main event because Adam Cole wants his World Title back.

Silas Young didn’t like the fact that his son was coloring a picture of ACH because that’s not how a real man acts. It’s nothing personal but Silas just doesn’t like him.

This is over Page and the rest of the Bullet Club attacking Cabana a few weeks back. Feeling out process to start with Cabana throwing him into the corner and grabbing the arm before snapmaring Page for two. Cabana gets countered into a wristlock though and is sent outside for a big springboard shooting star as we take a break.

Back with Cabana making his comeback and hitting a Dusty Rhodes Bionic Elbow, followed by a forearm to the head. Page flips over the top into a clothesline for two but Cabana hits a standing Lionsault for the same. Back up and Page charges into an elbow in the corner, allowing Colt to grab a rollup for the pin at 10:09.

Post match the Guerillas of Destiny come out to beat Cabana down.

The All Night Express wants to make wrestling great again.

Here’s BJ Whitmer to call out Steve Corino despite the fans calling him boring. Whitmer tells Corino to kiss his family goodbye before he goes off to Best in the World because he’ll never see them again. Cue Corino but security stops him from getting in the ring.

ACH thinks Silas Young is jealous because ACH can be himself while Young has to tell others how to be. Or maybe he’s just losing control of his household.

Non-title with Prince Nana and Taeler Hendrix as the respective managers. Dijak wins a quick brawl and sends Jay to the floor to keep up the fighting. A whip sends Lethal into the barricade but he comes back by posting Dijak and heading inside. Dijak needs a breather so Nana gets in the ring, allowing Donovan to get on the apron. Jay knocks him outside again and hits two suicide dives, only to have the third countered with a throw into the barricade. Dijak bumps things up with a moonsault over the top for a huge pop as we take a break.

Back with Lethal scoring with a dropkick but banging up his own knee. Dijak throws him down with a suplex and nips up to his feet before covering. The Lethal Combination is broken up but Lethal snaps off a German suplex. Dijak uses fighting spirit to pop back up and turn Lethal inside out with a discus lariat.

Jay has to fight out of a chokeslam and counters into a rollup, only to have Dijak lift him up into Feast Your Eyes. The knee misses though, allowing Jay to superkick him back. The Lethal Injection is countered into a sitout powerbomb for two more, only to have Nana and Hendrix get into it. Dijak loads up another Feast Your Eyes but here are the Bullet Club to accidentally superkick Donovan, setting up the Lethal Injection for the pin at 12:26.

Post match the Club beats on Lethal until the Briscoes come in for the save. Jay Briscoe holds up the World Title and stares at Lethal to end the show. 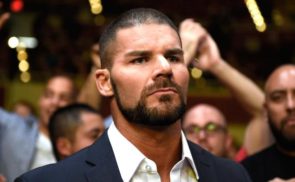