This is another Best Of show and I’m actually looking forward to seeing what Ring of Honor considers their best. I’ve had a good time watching the show since the summer and things have been getting better for months now. You can almost guarantee a lot of New Japan talent to appear on this show so let’s get to it.

As usual, the matches on this episode will be heavily clipped but I’ll be posting the full review of each match. All dates listed are when the match aired.

We’ll start with those New Japan guys in a tag match from Global Wars. From June 17.

Sydal is formerly known as Evan Bourne, ACH is a high flier and Tanahashi is basically the John Cena of Japan. The Japanese guys won’t shake hands to start, in theory making them heels here. Sydal and Tanahashi trade go behinds to start until Matt takes him down for a standing moonsault. A double tag brings in Naito and ACH with the fans being split. They take their time to start until Naito slugs him down in the corner to take over.

ACH avoids a clothesline and does some unnecessary flips before dropkicking Naito in the face. Tanahashi knees ACH in the back and throws him into the barricade as we take a break. Back with Tanahashi missing a middle rope swanton but still preventing a hot tag. We hit the chinlock from Naito as things slow down even more.

Naito sends him into the corner for a basement dropkick. ACH finally counters a hurricanrana and makes the hot tag to Sydal, who comes in to clean house. In a nice counter, Sydal loads up the standing moonsault but Tanahashi is waiting on him with a German suplex. ACH fires off a bunch of kicks to Tanahashi and a clothesline for two. A German suplex from ACH gets the same and he mocks Tanahashi’s air guitar. Tanahashi puts on his Texas cloverleaf but Naito tagged himself in.

The New Japan guys break up Sydal’s Asai moonsault but ACH hits a big dive to take both of them down. Back in and ACH hits a kind of springboard downward spiral to Tanahashi, followed by Sydal’s shooting star for two. Now it’s ACH going up top for a 450 but Tanahashi seemingly got the knees up. A sling blade sets up the High Fly Flow (frog splash) to give Hiroshi the pin.

Strong is on a roll at the moment and is known as Mr. ROH while Nakamura is a huge star in New Japan and one of their aces. Nakamura takes him down by the arm to start but Strong reverses into a key lock of his own. Back up and Strong nails some dropkicks but can’t put on a bow and arrow hold.

An Angle Slam gets two on Nakamura but he kicks Strong in the head and starts with his signature knee strikes. Another knee puts Strong over the barricade and we take a break. Back with Strong winning a slugout but falling to the mat. Strong is back up with a torture rack into a backbreaker though (he’s been called the Messiah of the Backbreaker), sending Nakamura to the ropes before the Strong Hold (Boston crab) can be locked in.

Instead it’s Nakamura slamming him down but missing the running knee and taking a jumping knee to the face. A backbreaker onto the top turnbuckle gets two but a big forearm drops Strong, followed by a jumping knee from the middle rope to knock him silly.

Strong is up first and grabs the Strong Hold, sending Nakamura into the ropes for a break. They slug it out again with Strong taking Nakamura’s head off with a running boot (Sick Kick) but a suplex backbreaker only gets two. The running knee gets one on Strong and Nakamura can’t believe it. Strong hits another knee but Nakamura just blasts him with a knee/kick to the face for the pin at 17:05.

Result: Shinsuke Nakamura b. Roderick Strong – Knee to the face (17:05)

This is Chaos vs. Bullet Club with Vice being a tag team of (Trent) Baretta and Rocky Romero. The Bucks (Nick and Matt Jackson) are the IWGP Junior Heavyweight Tag Team Champions and Styles is IWGP Heavyweight Champion, making this champions vs. challengers. Styles and Okada get things going with AJ snapping off some armdrags before they trade victory rolls for two each. An early attempt at both finishers fails as well and it’s a standoff after a very fast start.

Off to Baretta vs. Nick for some missed superkicks before Matt and Rocky come in. The Bullet Club gets tired of waiting and cleans house with a single superkick. Baretta gets triple teamed but Romero comes in to break up a cover. The Bucks start their slick double teaming before it’s off to Styles for a suplex into the corner.

Back from a break with AJ taking Romero and Okada off the apron to prevent a tag, so Trent whips out a tornado DDT for the tag to Romero. Rocky cleans house by dropkicking AJ off the apron and hurricanranaing both Bucks at the same time. Matt nails a superkick to slow him down but Rocky pops off the ropes and hits a clothesline to put both guys down. Okada and Styles come in off another double tag with Okada taking over in a hurry. AJ comes back with his moonsault into a reverse DDT but Okada reverses into something like White Noise into a backbreaker.

Nick gets double teamed by Vice as everything breaks down. A Doomsday Device but with a running knee and on the floor, plants Nick but AJ plants Okada with Sunday Bloody Sunday (Prince Devitt’s old move, basically a one arm DDT brainbuster). Okada pops right back up with a tombstone though and AJ is in trouble. The Rainmaker misses and Nick takes Okada to the floor with a tornado DDT.

Romero gets hung over the ropes for a swanton and More Bang For Your Buck (a quick series of dives) is broken up and Okada drops a top rope elbow on Nick. AJ’s springboard forearm takes Okada out again but Matt starts firing off even more superkicks, only to have Okada dropkick Styles down to break up the Clash on Romero.

All six slug it out and a triple superkick staggers Chaos. Okada again pops up and a double superkick/Pele combo and a spike piledriver into a flipping spike tombstone (the Meltzer Driver) puts him right back down, followed by a double superkick into a Styles Clash on Baretta for the pin at 17:25.

We recap the main event of Best in the World with Jay Lethal vs. Jay Briscoe for the TV/ROH World Titles, winner take all. Both guys had been on a roll for over a year and this is the showdown of the best in Ring of Honor for both titles. This match will be clipped as well and I don’t have a full version so there will be clips listed.

They shake hands to start and we’re ready to go. The House of Truth tries some early interference and get thrown out to make this one on one. Well two on one as Truth Martini is still at ringside. Lethal drops to the floor twice in a row to start and Briscoe doesn’t seem pleased. A lockup doesn’t go anywhere so they trade wristlocks with both guys challenging, only to have Briscoe take over with a front facelock.

We hit the chinlock for a bit before Briscoe fights back up and grabs a neckbreaker. Back from another break with the Lethal Combination getting a quick two. The Macho elbow is broken up for a bit, only to have Lethal shove Briscoe off to stop a superplex. Now the elbow gets two but a Koji Clutch is quickly broken up. They head to the apron with Lethal hitting him low to save himself from a Jay Driller through the table. Martini’s distraction earns himself an ejection and now the Jay Driller puts Lethal through the table as we take a third break.

Back with both guys inside and Briscoe running into a superkick, only to counter the Lethal Injection with a discus lariat. The fans are losing their minds over this stuff. Lethal grabs the Injection out of nowhere for a very close two and Corino can barely keep going. With nothing else working, Lethal grabs a Jay Driller, followed by another Lethal Injection to finally become undisputed champion at 27:13.

Delirious of all people comes in to wish us Merry Christmas to wrap things up. 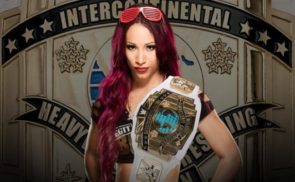