The slow path through the summer continues with another big match from the Toronto show, which is only about a month old at this point. As much as I prefer the new format, there is no hiding how messy the whole promotion is at the moment. Maybe the wrestling can work, but it’s just meandering through the year with no sense of direction. Hopefully it’s an easy hour of TV this week, which is all you can ask for around here. Let’s get to it.

We open with the ending of Matt Taven successfully defending the World Title against Alex Shelley in Toronto. Post match Taven listed off all the people he’s defeated and knows he’s on the path to being the best World Champion ever. Cue Rush for the staredown, with commentary bringing up their history in Mexico.

Ian and Quinn welcome us to the show and preview what’s coming.

We look at Rush beating Dalton Castle for the second time, this time in a No DQ match in Toronto. This isn’t quite as interested after it was mentioned that he won in the Taven clip.

Lethal says he and Gresham have had some issues but now they’re on the same page. They’re after the Tag Team Titles.

Dante Caballero is ready to take advantage of his tournament spot.

Joe Keys stands in front of a big fan and admires his physique as, ahem, shall we say adult music plays. Isn’t Rhett Titus the resident body guy? He promises to win.

Highlights of Keys vs. Caballero, with the latter winning by submission via the Crossface.

The Bouncers shout about how angry the Kingdom has made them. They’ll get sick with the Kingdom.

Clips of a six man CMLL match from Toronto.

Haskins and Gresham start things off with the technical exchange you knew was coming. A standoff lets Gresham pose a bit as the tiny chants seem to be going for Haskins. Another takedown gets Haskins nowhere and we take an early break. Back with the technical off continuing, this time with a series of headlocks being reversed into a series of headscissors. They shake hands with Gresham tagging in Lethal and bailing to the floor.

Bandido comes in to a very well received reaction and it’s another standoff as they’re still not all the way into second gear so far. They trade flips with neither being able to get anywhere, including a pair of no count covers into another standoff. The fans are rather appreciative and a handshake means it’s time to try it again. This time Lethal gets kneed in the ribs and it’s Haskins coming in for a double basement dropkick. Lethal fights back but Haskins blocks a sunset flip and stomps on the arm to take him right back down.

That doesn’t last long though as it’s already back to Gresham, who sends Haskins into the ropes while Lethal dropkicks Bandido off the apron. We take another break and come back with Lethal yelling at Gresham for low bridging Bandido to the floor. Gresham doesn’t have time to argue though as he sends Bandido into the apron and grabs a chair, which is too far for Lethal.

Gresham shoves him down and everything breaks down with Haskins hitting a Death Valley Driver to send Gresham into Lethal for two, with the kickout offering a shock. A Samoan driver gives Haskins two more so he does it again, setting up Bandido’s frog splash for two with Gresham diving in for a save. Gresham sends Bandido into the steps, leaving Lethal to Figure Four Haskins.

The hold stays on for a long time until Bandido comes back in to powerbomb Gresham onto Lethal for the save. Gresham and Bandido slug it out with Gresham nailing an enziguri, only to get caught with a pop up cutter. Lethal comes back in and gets caught in a torture rack into a GTS. The 21 Plex sets up Haskins’ Sharpshooter to make Lethal tap at 18:22.

Matt Taven lists off names he’s defeated and he hasn’t forgotten that Rush cost him his hair. That was in Mexico but this is his kingdom and he has been waiting for revenge. Rush’s name is going to the bottom of the list. 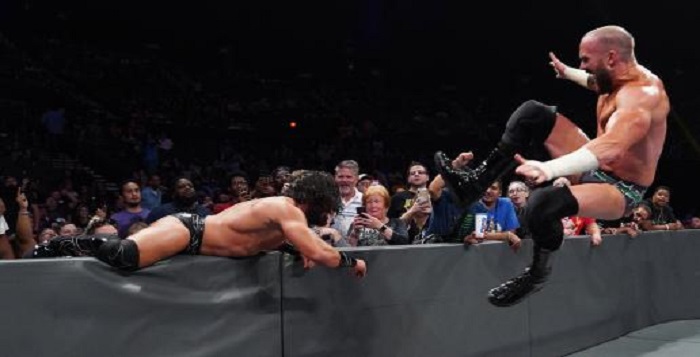