We’re coming up on Death Before Dishonor and that means it’s time for the standard Ring of Honor crash course booking as they suddenly realize that just saying the show is coming isn’t the same thing as actually setting it up. You get used to that around here but it doesn’t make anything better. A main event would be nice if nothing else. Let’s get to it.

Here’s World Champion Jay Lethal for an opening chat. He’s been asked about the matches that he’s considered his best over the years and now there’s a new one on top of his list after last week’s Iron Man match against Jonathan Gresham. That match proved to him that you don’t need gimmicks or storylines to have a great match. It also showed him that he wants to have great matches with the rest of the locker room, or any locker room for that matter. The challenge is open to anyone so here’s Will Ospreay on the screen to challenge for the title. Lethal seems game.

So Cal Uncensored is ready for Punishment Martinez and the Briscoes.

The Briscoes and Punishment Martinez are ready for So Cal Uncensored.

Non-title, Brandi Rhodes is on commentary and this is a Proving Ground match, meaning Steelz gets a title shot if she wins. Steelz poses at the champ instead of shaking hands. Sumie forearms away to start and gets sent outside as Brandi accuses Caprice of hating on the women’s division. Back in and Sumie chops away, followed by a clothesline and a running knee. A missile dropkick gets two but Smash Mouth is countered into Stratusfaction. Not that it matters as Smash Mouth finishes Steelz at 3:13.

The Bullet Club says they’re the top of the pile in Japan and Chaos is at the bottom. Therefore, the ten man tag at Death Before Dishonor is an easy match for the Club.

Sakai is still in the ring and is told that the Women’s Title is now the Ring of Honor Women’s World Title. Sakai says this is her home and challenges Tenille Dashwood for the title. Cue Tenille to say they can do this at Death Before Dishonor.

Kenny King is ready to beat up Adam Page next week.

Here’s Jonathan Gresham to say he wants another shot at Lethal but here’s Bully Ray to scare Riccaboni off. Ray says he sold out Madison Square Garden on his own, which Gresham never could have done. This is like the old Piper’s Pit with Frankie Williams (Ray: “He was the jobber.”) because Gresham is nowhere near as great as he thinks he is. Where was Gresham’s standing ovation when he came out here? Gresham takes the mic and says he knows he can’t win a match with Ray. He can win a match with Ray though because there’s no D-Von here to do the work. Ray says get a referee.

Ray kicks him low at 14 seconds.

Result: Jonathan Gresham b. Bully Ray via DQ when Ray kicked him low (0:14)

Post match Ray shakes his hand for being the better wrestler and whips Gresham with the chain. Flip Gordon runs in for the save but gets knocked down as well. Cue Lethal for the real save but Silas Young lays him out with Misery. Silas wants nothing to do with a hug from Ray and leaves.

Post break Lethal and Gresham set up the tag match for next week.

Sabin says he’s betting on himself.

Briscoes/Punishment Martinez vs. So Cal Uncensored

Sabin is on commentary and it’s a big brawl to start with Jay getting run over in the corner. Some stomps to the back have Jay in more trouble and Mark has to come in for the save. A cheap shot from the apron lets Jay clothesline Daniels to the floor and it’s Martinez coming in to hammer away as well. All three villains take turns beating Daniels down and we take a break.

Back with Daniels slipping out of a chokeslam and bringing in Scorpio Sky to clean house. A slingshot cutter gets two but Jay hits a head of a Death Valley Driver to cut him off. Everything breaks down and Kazarian DDTs Mark for two. Daniels’ middle rope knee to the chest into a suicide dive gets two but Jay’s chair shot hits the referee by mistake. More chair shots have So Cal Uncensored knocked out but Sabin comes in to take care of Martinez. So Cal Uncensored pops up for the Best Meltzer Ever and the pin on Mark at 11:42.

Result: So Cal Uncensored b. Briscoes/Punishment Martinez – Best Meltzer Ever to Mark (11:42) 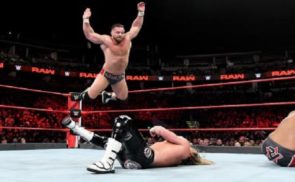 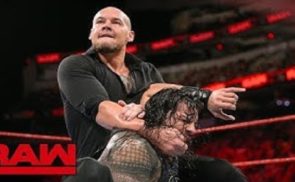