It’s title night as we finally get to crown a new Pure Champion. Jonathan Gresham meets Tracy Williams in the final, which should be a heck of a technical spectacle. That’s the point of the tournament so they couldn’t have picked a much better final. We also have our first non-tournament return match since the relaunch. Let’s get to it.

The opening video looks at Williams’ and Gresham’s paths through the tournament to the final.

Quinn McKay previews the show, including the finals, something between Matt Taven and Vincent, and the six man tag.

We preview the six man tag, which is basically a recap of EC3’s limited time in the company.

EC3, in slacks, powers Khan down twice in a row to start before hammering away with rights and lefts. The chase on the floor lets Khan stomp away back inside but EC3 shrugs it off and hands it off to Mark for a change. Some shots to the face in the corner have Khan in trouble but it’s back to Moses, who drives Khan into Mark in the corner. Mark doesn’t seem to mind and gets over to Jay for the hot tag as everything breaks down.

We take a break and come back with Shane punching Mark out to the floor and kneeing Jay down for two. The stomping ensues and Shane knocks EC3 off the apron, only to have Mark come in off the hot tag. Everything breaks down and Mark hits a corkscrew dive onto the Soldiers. Back in and the Froggy Bow misses Shane, who hits Greetings From 216 for the pin at 11:46.

Result: Shane Taylor/Soldiers of Savagery b. Briscoes/EC3 – Greetings From 216 to Mark Briscoe (11:46)

Video on Tracy Williams, who has come a long way to get to the tournament final. He’s ready for Gresham in the finals as they are going to build this company on pure wrestling.

Jonathan Gresham talks about getting a phone call from Williams about the Foundation. This company has lost its honor and it’s time to rebuild things. Gresham is ready to bring the title back to the Foundation no matter what.

For the vacant title. They shake hands to start and Williams towers over him. It’s straight to the grappling early on but neither can get a hiptoss. Instead they head outside for a staredown until Williams gets back in and holds the rope open for Gresham. Back in and Williams starts working on the arm but Gresham slips out and we take a break. We come back with no time having elapsed and Gresham starting in on Williams’ arm to take over for the first time. Williams goes to the ropes to get a breather and then chops Gresham right back down.

A cravate of all things gives Williams two and Gresham has to go to the ropes as well. There’s a spear to Williams but he’s right back up with a clothesline in the corner. Gresham hits a suplex with Williams popping up again for another chop. A bridging German suplex gets two on Williams and a collision in the corner puts them both on the floor in a heap.

Back in and Williams gets two off a brainbuster, setting up the Crossface to stay on the neck/shoulder. That means a second rope break from Gresham, who is back with a bridging German suplex of his own. Gresham forearms him down for two more but he can’t get a Kimura in full. Williams is back up with a piledriver for two, with Gresham using the final rope break. They both need a breather and Gresham pulls him into the Octopus for the sudden tap at 14:37.

Post match Jay Lethal comes out to celebrate and respect is shown to end the show. 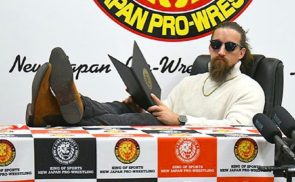