The long march to Final Battle continues as we are still in the post-Death Before Dishonor TV tapings. In other words, these are still matches from before all of the company’s future went away, so there might still be a little something here. Then again, I’m not sure how much hope that really is. Let’s get to it.

Quinn McKay welcomes us to the show and gives us the rundown.

This is Coleman’s first singles match in a long time and Bruiser has Brian Milonas and Ken Dixon with him. Before the match, Bruiser says Coleman wasn’t an official entrant in the Honor Rumble so he was never eliminated and should be #1 contender. Coleman comes to the ring and Bruiser laughs at the idea of Coleman getting back in the ring….so he can face Dixon instead.

Dixon is in jeans and the Bouncers are at ringside. Feeling out process to start as they go to the mat with Dixon not being able to get very far. We take a break and come back with Coleman hitting a basement shoulder, setting up a legdrop for two. Milonas offers a distraction so Bruiser can add a clothesline to give Dixon control for a change.

A fall away slam gives Dixon two and we hit the chinlock. Backup and the clothesline comeback is on but Father Time (cobra clutch Russian legsweep) is broken up. Dixon sends him outside but Coleman flips backwards into a headscissors to drop Dixon on the floor. Back in and Father Time sets up the cobra clutch but the Bruiser comes in for the DQ at 8:01.

We recap Flip Gordon losing his memory and taking potions to get his memory back.

Taven and Gordon start things off as Gordon doesn’t seem impressed. Gordon grabs a headlock but Taven talks his way out of it, allowing the tag to Black. OGK gets together for a double dropkick but Black grabs a wristlock. A tag (with the foot) brings in Gordon, who has to be told to come in off the top to work on the arm. Back from a break with Gordon and Bennett trading chops but Black breaks up a spike piledriver attempt. Black comes back in for a springboard moonsault into a double reverse layout DDT.

Bennett’s spear gives Taven two and a running kick to the face gives Bennett two of his own. A backbreaker/top rope elbow combination gives Taven two more and Bennett’s brainbuster gets the same. Black is fine enough to roll over for the hot tag off to Gordon, who springboards in to take OGK down. House is cleaned but Gordon has to bail out of the 450. Instead, he puts Taven on his shoulders for a Doomsday Canadian Destroyer but Bennett makes the save. Black gets sent outside though and it’s a spike piledriver to finish Gordon at 9:43.

Honor For All rundown.

Vincent/Bateman/Dutch vs. Jonathan Gresham/Tracy Williams/Rhett Titus. Vincent and Titus start but Gresham comes in before anything happens. Hold on though as Vincent grabs the mic and tells Jay Lethal, on the floor, to come stand in the right corner. That’s a no, so Vincent shows a clip of Lethal saying he doesn’t even like the Foundation.

Tracy walks Lethal to the back as Lethal protests, allowing the Righteous to jump the other two. The beating takes us to a break and we come back with Gresham being sent into the corner for a stomping, followed by some choking to make it worse. Gresham rolls over and brings in Williams to clean house, including a discus lariat to Vincent, who isn’t legal. Dutch comes in and cleans house, allowing Vincent to hit some running forearms in the corner. Redrum gets two, with Gresham needing a double save.

We take a break and come back with Vincent hitting a basement Downward Spiral for two on Gresham, including another save. The hot tag brings in Titus for a half crab on Bateman but Dutch drives Gresham into them for the save. Dutch Jackhammers Titus and Bateman adds Orange Sunshine. A ripcord Boss Man Slam finishes Titus at 12:25. 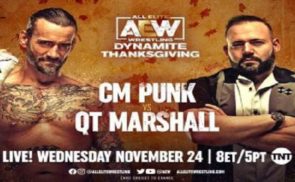