Things are getting a bit more interesting, or at least a bit more intriguing, around here as we get to find out what they are throwing out there next. The relaunch is in a few weeks but there are still some shows to fill in. Thankfully that has included opening the video vault and there is some great stuff in there. Let’s get to it.

This week’s show is looking at some of the greatest hits of Supercard of Honor, the annual Wrestlemania weekend show.

Yoshino works on Horiguchi’s arm to start and they trade armdrags into a standoff. Doi comes in to face Kid (via tags, though they aren’t required here) for a fast standoff so it’s off to Cima vs. Horiguchi. Cima accidentally knocks Doi off the apron so Horiguchi headscissors him out to the floor. Saito comes in and Samoan drops Yoshino and it’s Kid coming in with an ax handle to Saito’s back. Some running shots to the face set up a bulldog into a running basement dropkick to rock Saito again as we take a break.

Back with Cima ax handling Kid but getting pulled into the corner for his efforts. Saito gets two off a legdrop and we hit the chinlock. Cima fights up and brings Doi back in, only to lose a chop off to Saito. Doi manages to drive Horiguchi into the corner and Cima and company start some triple teaming. Yoshino gets an Octopus hold on Horiguchi, with his partners playing defense so Horiguchi can get rolled up for two. A running flipping splash gives Doi two and he grabs a seated abdominal stretch as we take another break.

Back again with Kid cleaning house as everything breaks down. The dives are on until it’s Cima dropkicking Saito, who is right back with rolling fisherman’s suplexes for two. Saito gets caught in the corner for some running knees until Yoshino hits something like a Sling Blade on Kid. A missile dropkick gives Yoshino two and a reverse powerbomb gets two. Doi hits an F5 into a faceplant for two on Horiguchi but Kid is back up with a super hurricanrana to take Doi down.

Saito adds a frog splash for two but Horiguchi is back up with a missile dropkick of his own to Yoshino. An exchange of strikes sets up Saito hitting a hard German suplex for two on Yoshino and Kid’s West Coast Pop gets the same with Cima making the save. Horiguchi hits an over the back piledriver (think an Alabama Slam but dropped backwards into a piledriver) for two more on Yoshino.

A series of running strikes in the corner rock Saito and a top rope double stomp crushes him. Kid gets planted with an Air Raid Crash for two but Yoshino runs him over for the same. Doi and Kid wind up on top, with Kid hitting a super cutter. A super hurricanrana is enough to give Kid the pin on Doi at 20:34.

Here are highlights of some Supercards of Honor.

Lethal is defending in a ladder match and Taven is played to the ring via piano. The ring announcer makes it clear that this ladder match is ONE FALL. Marty goes straight for a ladder so Jay baseball slides it into him. Taven is right there with the no hands dive to take them both down but bangs up his wrist in the process. Lethal goes with some chairs and bridges a ladder between some in the aisle.

That takes too long so Marty jumps him from behind and goes inside to put a pair of ladders in a pair of corners. Lethal and Taven are back in with Jay hitting both of them with ladders to take over. Instead of going up, he bridges a ladder over the bottom rope and of course gets sent face first into it. Marty ties Lethal in the Tree of Woe in the ladder and blasts it with a chair a few times. Lethal is mostly dead so Marty sets up a ladder in the middle, grabs the umbrella, and goes up.

That takes a bit too long though and it’s Taven making the save with a superkick. Taven knees the ladder around Lethal’s neck but it’s Marty going up the ladder. Lethal ties him up in a Figure Four in the ladder but they have to let go so Taven can be stopped. Marty takes a cutter on the apron and Taven powerbombs Lethal onto the bridged ladder in the aisle.

Back in and Marty gives Taven a 619, which further injures his knee. Taven ladders Marty down and the fans are all over him, because Taven is as popular as a bad fungus. For some reason Taven climbs a ladder in the corner, earning himself a superplex back down. Lethal comes back in and flips out of the chickenwing attempt. With Marty down, Lethal goes up, punches Taven down, and gets caught in the chickenwing on the ladder.

Taven goes up as well and gets his fingers snapped but Lethal kicks them both off the ladder. A Lethal Combination sends Taven into the ladder and Lethal misses a charge, putting one ladder through another in the corner. Marty drops Taven onto the X between the ladders but walks into the Lethal Injection. Lethal throws the double ladder outside and it nearly knocks out half of the first row. Fans: “THAT’S A LAWSUIT!”

Scurll gives Lethal a brainbuster on the floor and loads up a table as Aldis is suddenly very anti-Lethal. Taven is back up and spears Marty off the apron and through the table. They’re both down so Lethal pulls out another table and the big ladder, setting up Hail to the King for the crazy spot of the match. Lethal and Marty go up but Taven busts out a big purple ladder. They all get knock down as Aldis has to explain to Riccaboni why a taller ladder is a good idea. Taven climbs up, hits Lethal in the head with the title, and wins at 29:38. 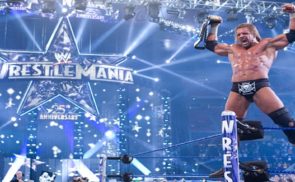