With less than a month to go before Best in the World, it’s time to start cranking up the card. We don’t know much about it at the moment other than the triple threat main event, which should be little more than Cody’s coronation. Other than that, there isn’t anything major announced but maybe that can change tonight. Let’s get to it.

Here are Cody and Bernard the Business Bear to open things up. Cody talks about how ironic it is that he’s called the American Nightmare when the last six months have been a dream. He’s going to be the next Ring of Honor and NWA World Champion but he’s not thrilled with Marty Scurll being in the Best in the World match with him.

Cue Scurll to a big reaction to say the fans know how great he is, which Cody knows too. Cody is threatened and intimidated by him and at Best in the World, Cody will see how good he is. Scurll has no problem going through him to win the title but Cody thinks he has more to say. They shake hands and Marty teases breaking the fingers but leaves without getting violent.

Dashwood cranks on the arm to start and takes her down, allowing a little trash talking for fun. A headscissors is botched a legsweep gives Dashwood two instead. Karen trips her right back and we take a break. Back with Karen slowly pounding away and shouting a lot, which the announcers call a change of attitude.

Dashwood gets slammed face first into the mat but comes right back with a Tarantula to slow Karen down. A loud boot to the face keeps Karen in trouble and the Taste of Tenille gets two. Karen pulls her down into a Liontamer but a rope is grabbed to avoid any longer damage. Dashwood doesn’t get up so she sunset flips Karen from the mat for the pin at 10:36.

Page vs. Martinez is confirmed for Best in the World. Also set for the show: the Briscoes vs. the Young Bucks for the Tag Team Titles.

Young is defending and in a coincidence, they’re both from Milwaukee. Aries hasn’t has a title match in Ring of Honor in over eight years. Aries gets driven into the corner to start and Young throws a shirt at him to a big reaction. A takedown gives Aries a rollup for two but it’s way too early for the Last Chancery. That’s enough for Young to give him a round of applause and a shot to the face makes things a little more serious.

Some nice armdrags can’t set up an armbar as Young keeps rolling out so Aries dropkicks him in the face instead to cap off a fast sequence. The middle rope elbow to the seated back gives Aries two and Young bails to the apron. That goes badly as well with Aries ramming him into both buckles over and over as we take a second break. Back with Aries being whipped into the barricade as things slow down a bit, partially due to the pace they’ve been keeping.

Young grabs a quickly broken chinlock back inside before going with the backbreaker into a clothesline for two more. A full nelson of all things has to be broken with Young being sent to the floor and there’s the suicide elbow. Young is right back with a series of shoulders in the corner but neither guy can hit their finisher. Instead it’s a Death Valley Driver on the apron to knock Young silly as we take a break.

Back again with Young getting caught in the Last Chancery but a foot is quickly on the ropes. A frustrated Aries grabs a belt (come on you’re smarter than that) but we’ve got a ref bump. Cue the Beer City Bruiser, though Kenny King is out just a second later to cut him off. With the referee still down, Young tries to grab a title, which Kenny steals right back to knock him cold, allowing Aries to score the pin and the title at….whatever time the fall went down because we have a Dusty Finish. Another referee comes out to tell the downed one what happened and that’s a DQ win for Young at 16:48.

Post match Aries shoves the referee with King pulling him off. That doesn’t work for Aries, who lays King out with a brainbuster and the Last Chancery to end the show.

There was supposed to be a Jay Lethal announcement but nothing ever happened. 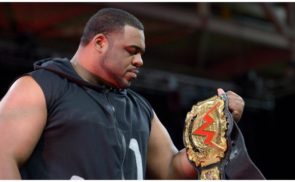 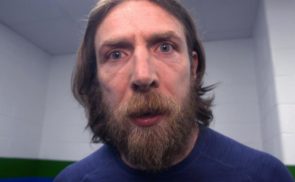