We are almost up to Best in the World and that means we should be in for the big final push towards the show. This time around though, we have a special fight between the Briscoe Brothers, taking place from their chicken farm. That might sound absurd, but these two could absolutely pull it off. Let’s get to it.

Quinn McKay welcomes us to the show and gives us the weekly preview.

Last week, Bandido won Survival of the Fittest and is REALLY excited to get to challenge Rush for the World Title at Best In The World. He gave Quinn a big hug, which she said never disappoints.

Fred Yehi talks about how he has been having a bit of an up and down time around here as of late. Now he is on a roll and has a Pure Rules Title shot against Jonathan Gresham. He and Gresham had the same trainer and they have met a lot over the years. They’ll shake hands before and after the match, but he’s taking the title in the middle.

Jonathan Gresham was excited when he heard that Yehi was coming to the promotion. He didn’t expect Yehi to be so worried about the division though, so now it’s time to fight. When the bell rings, Yehi isn’t going to have to worry about anything more than getting taken apart. After the match, Yehi can shut up and get out of the way.

Pure Rules with Gresham defending and #1 contender Mike Bennett on commentary. They shake hands but Gresham kicks the hands to break it up, which doesn’t go well for Yehi. In the least surprising moment of the show, they go to the mat to start and that’s good for a standoff. Yehi takes him down by the leg but has to slip out of an armbar, setting up another stalemate.

Something close to a stump puller has Gresham in more trouble but he slips out in a hurry. They trade hiptosses to send both of them outside, where Yehi snaps off a headlock takeover. We take a break and come back with a staredown as they get inside. Another attempt at a hiptoss over the top doesn’t work and the glaring continues. A rather aggressive lockup leaves both of them next to the ropes, with Gresham rubbing the wristband against the eyes.

Yehi shoulders him down and stomps away before they go into a pinfall reversal sequence. Neither can get a hold until Yehi tries a choke, sending Gresham backflipping onto him for two. A test of strength goes to Yehi, who drops down onto Gresham to break his bridge. Gresham switches the grip to crank on the hands but Yehi slips out again and tries some stomping. That’s fine with Gresham, who cradles him down and ties up the arms for the pin to retain at 12:16.

Post break, Jonathan Gresham talks about training with Fred Yehi and is impressed, but this is his division. If Yehi wants another title shot, train a bit more and come get it. Gresham is ready for Mike Bennett, who is not honorable.

Watch Best In The World!

Papa Briscoe recaps the recent issues between his sons Mark and Jay. They need to fight it out because that’s what they’ve always done.

The Briscoes are ready to fight, with Mark talking about the things he has done to Jay around here, while Jay talks about how he might need to prove that he is the better man again.

Papa Briscoe opens the door to the barn and they all get in the ring, with Papa saying to keep it clean and fight like men. Mark slaps Jay in the face and stomps away in the corner to start. Jay kicks him in the face to take it outside but Papa tells them to get back inside. That’s fine with Mark, who hits a running splash in the corner and hammers away. A moonsault takes way too long though and Jay shoves him off the top and down through a table.

They fight outside of the barn with Jay hammering away and finding a trashcan lid to whack him again. Some metal tub shots to the head rock Mark, who comes back with a low blow. Jay: “YOU SON OF A B****!” Be nice to Mama Briscoe man. Mark sets up a ladder and climbs onto the top of an RV. They yell at each other until Jay joins him for the slugout. Jay fires off punches until Mark chokes him down. Back up and Jay throws him off and onto a big pile of stuff. Jay: “I’m gonna go pin his a**.”

This involves taking Mark into the back of a truck, which Jay drives away to another par of the farm. By the time he parks (and once the cameraman gets out), Mark has disappeared and jumps him from behind. A table (in the back of the truck) is set up and Mark climbs a tree to get on top of a shelter. The big splash off of the room crushes Jay and they’re both down again.

Papa comes in to ask if they’re good yet and helps carry them back to the ring so they can get this out of themselves. They get back up and slowly slug it out, with Papa asking over and over “ARE YOU GOOD YET???”. A bunch of punches put them down on their knees until Mark hits a heck of a clothesline to put both of them down for good at 16:20. 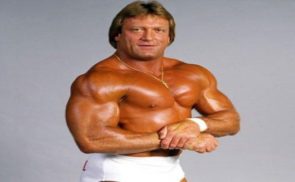 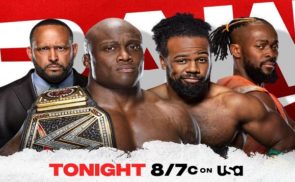