We’re back around here and that means there is likely to be something about the NWA Invasion. It might not be the most original story in the world but it’s something fresh and that’s EXACTLY what they have needed around here. Things have felt stale for a long time now and that isn’t going to be completely fixed with one story, but it’s a big upgrade. Let’s get to it.

We open with a look at PCO vs. Rush involving a ton of interference, including NWA World Champion Nick Aldis, with the match ending in a no contest.

Ian and Quinn preview the show.

Brian Johnson isn’t interested in watching footage with PJ Black and leaves. Black says phase two is about to begin.

We go to Atlanta where Bully Ray ranted about dirt sheets promised Maria Manic was coming to fight him. Cue Maria, with Ray daring her to get on the apron and then in the ring. Maria looked scared but then got inside and speared Ray down. A table was loaded up but Angelina Love and Mandy Leon ran in to beat her down. Ray splashed Maria through the table to wrap it up.

During their entrance, we hear the Bouncers asking why we have so many makeshift teams around here. Oh and buy their jersey. After some yelling over the t-shirts, Milonas shoves Black down and catches a crossbody without much effort. A slam plants Black again and a Pounce sends him into the corner. Johnson comes in and gets chopped down so Bruiser comes in to chop it out with Black.

Another chop puts Johnson in the corner and there’s another one to the back. Milonas’ falling splash crushes Johnson and we take a break. Back with Bruiser’s no teeth bite and an old Bushwhackers’ Battering Ram for two on Johnson. A cheap shot lets Johnson go to the apron where he slips off the ropes to the floor, gets back up and slips again, before finally hitting a spinning shoulder.

Johnson brings Black in for a chinlock so things can settle down a bit. Johnson grabs his own chinlock and throws his feet on the ropes, which is such a lost art these days. Black points out the cheating to the referee and comes in, only to get clotheslined by Bruiser. Milonas gets the hot tag and starts cleaning house, including a double crossbody to Johnson and Black. Closing Time is broken up but Johnson grabs a chair, with Black taking it away. Now it’s Closing Time to finish Johnson at 10:56.

Post break, Johnson rants but Black comes in to say you win with your mind and then your body. They do some breathing to calm down. Well Black does at least as Johnson walks away again.

Rhett Titus is on commentary and that would be Rush/Dragon Lee/Kenny King (with Amy Rose) vs. PCO/Marty Scurll/Brody King. Lee takes Scurll down to start so Scurll spins around to grab a hammerlock. A shoulder puts Lee down but he nips up (off camera) to annoy Marty. La Majistral gives Marty two and we take an early break. Back with Brody shouldering Kenny down as King is becoming the new Jay around here.

Rush and PCO come in for the hoss fight with PCO planting him off a spinebuster. Everything breaks down and they fight to the floor with La Faccion taking over, including choking Scurll with a camera cord. PCO gets thrown inside so Lee can work on his leg, followed by Kenny striking away in the corner. Rush grabs a triangle choke over the ropes, followed by the running kick to the face.

We take another break and come back with PCO clotheslining his way out of trouble. Brody comes in with a bunch of running corner clotheslines and it’s Scurll sunset flipping Brody to German suplex Kenny for two. Everything breaks down again and Lee’s backsplash gets two on Brody. Lee and Brody strike it out until it’s Rush coming in to chop away and PCO and Brody at the same time.

That earns him a double chokeslam and La Faccion is sent outside. That means a double backdrop to send PCO onto all three of them, setting up the PCOsault for two on Rush with Lee making the save. We hit the parade of secondary finishers and everyone is down. The Villains take over on Kenny with Marty going after the fingers.

That earns him a kick to the head but Marty is fine enough to hit the Ghostbuster for two. Brody’s suicide dive takes out Lee and Rush, setting up the apron Swanton from PCO to Kenny. The chickenwing has Kenny in trouble but he flips out into a rollup for two. Marty and Lee go up top but the rest of the Faccion comes in for a double powerbomb/double stomp combination to finish Marty at 17:17. 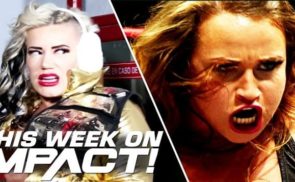 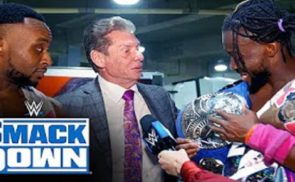 It’s A Different Way To Go: New Day Reveals A Scrapped Segment Involving Vince McMahon (It Would Have Been Awesome)