Final Battle is next week and the card seems to be mostly set. For once, they’re at least doing something with the build towards the show, which is more than you get most of the time around here. Odds are we’ll see a few matches set up here along with the build to those already announced. Let’s get to it.

We open with a recap of last week’s main event, where the Briscoes and the Young Bucks went to a draw. SCU didn’t seem to mind and made a triple threat ladder match for the Tag Team Titles at Final Battle.

Marty Scurll, who wants to face Daniels at Final Battle, is on commentary. Before the bell, King says he doesn’t know how long Daniels has left in ROH so he’ll hand Daniels one of his last losses. Then Daniels can go back to SCU: the Senior Citizens Unite at the hospital. Daniels, with tape on the back of his neck, chops away to start and gets two off a standing Lionsault.

That’s enough to send King outside for a baseball slide and a whip into the barricade. A legsweep knocks Daniels off the apron though and we take a break. Back with King clotheslining him down and…doing whatever he does as we look at commentary. A chinlock with a knee in the back keeps Daniels down and a kick to the head makes it even worse.

Daniels avoids a springboard though and the Blue Thunder Bomb gets two. An STO sets up a belly to back faceplant for two but King gets the same off a spinebuster. It’s too early for the Royal Flush though and Daniels hits a release Rock Bottom. The referee gets bumped though, allowing King to hit a low blow and the Royal Flush for the pin at 8:48.

Dalton Castle says he was gone for three months and didn’t go through all that treatment to fight Matt Taven. That belt that Taven wears is nothing but a RUSE. The anger inside Castle is certainly real though.

Non-title. Cobb tries to wrestle him to the ground but Woods is a former NCAA wrestling champion so it’s not so easy. Cue Hangman Page to sit on the stage and watch the match as Woods takes him down and works on the arm with Cobb not being able to shake him off. Cobb gets tired of the wrestling thing and sends him flying with a suplex, only to get caught in another armbar. Woods goes after the arm again before trying a spring but Cobb catches him in the Tour of the Islands for the pin at 3:48.

Post match Page comes in and says he’ll show Cobb how this is done.

Joined in progress with Page stomping away in the corner as Cobb is watching from the stage this time. Page hits a running dive from the apron and gets two off a tabletop suplex back inside. Facade fights back with some flips and jumps, including a one armed cartwheel. A rope walk dive goes right into Page’s boot though and there’s a super fall away slam. Again Facade tries to slug away, this time connecting with a springboard spinning kick to the face to send Page outside. That means a big flip dive of his own but he walks into the Buckshot Lariat. The Rite of Passage finishes Facade at 5:14.

Post match Page and Cobb stare each other down.

We look back at Marty Scurll winning the Survival of the Fittest tournament.

After the match, Scurll congratulated Christoper Daniels (the man he pinned) on a good match. Daniels said Bullet Club cost him the match and arguing ensued. They’ll face off at Final Battle with Scurll’s World Title shot on the line.

Jay Lethal is ready to beat Cody because Cody had to cheat to beat him in the first place. Cody knows he can’t beat Lethal so Jay is ready at Final Battle. Cody cannot win because Jay isn’t letting him start the year on top.

Matt Taven talks about Dalton Castle cracking under the pressure of being World Champion. When he’s under pressure though, Taven becomes a diamond.

We get that heart rate thing again.

SCU is defending. Sky, dressed up as Apollo Creed, takes Guerrero down to start and works on the arm to keep him in trouble. A tilt-a-whirl backbreaker gives Guerrero two and it’s off to Stuka vs. Kazarian with Frankie getting two off a dropkick. The champs tie up Stuka’s legs and roll him over (the Rockers used to do that) and we take an early break. Back with Stuka and Guerrero putting Sky in a double surfboard until Kazarian makes a save.

Another double hold is broken up again and we get back to the actual tagging with Sky coming in to take over. Kazarian adds the slingshot dropkick in the corner but Stuka moonsaults onto him outside (with Kazarian somehow winding up on top). Guerrero adds a running flip dive through the ropes onto Sky but Kazarian comes back in with his slingshot DDT. The Rock Bottom into the Backstabber finishes Stuka to retain the titles at 8:04.

Post match Christopher Daniels comes in to say he’s the only one who doesn’t have a contract extension at the moment. He has one match left on his contract and that’s against Marty Scurll at Final Battle. If that’s what he has to do to stick around, he’s willing to do it to stay in the company that he helped build. Marty gets in the ring and asks if Daniels wants to be the man who built his company or the man who is known for a three letter catchphrase. A tense handshake takes us out. 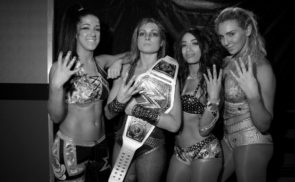 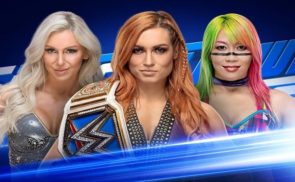