We have finally arrived at what seems to be the last original content episode of the show. That causes some mixed feelings, as it is sad to see the show go but it also finally puts it out of its misery. That should not be the case with any wrestling show, but it has been around here for a long time. Let’s get to it.

Quinn McKay gives us the opening welcome and rundown.

Josh Woods gets to draw his names for the Christmas Surprise twelve man tag team main event and seems rather pleased.

Brian Johnson draws his names and is less impressed, as is his custom.

Holidead is challenging and says it is time for the dark reign to begin. Rok-C is ready for whatever Holidead brings at her because Holidead doesn’t have heart or the title. She still isn’t great at this talking thing. Rok-C rolls away from her to start before grabbing a headlock. Holidead is back with a headlock takeover of her own, which is reversed in a hurry as well.

Rok-C’s headlock takeover puts Holidead down for a change before Rok-C starts striking away to send Holidead outside. The suicide dive is pulled out of the air though and Holidead posts her to send us to a break. Back with Holidead putting her in a fireman’s carry for some head first rams into the buckles.

Rok-C comes back with a Thesz press and right hands, followed by the Rok Knees for two. A swinging Downward Spiral gives Holidead the same but Rok-C is back with a Backstabber. The running knee to the face gets two on Holidead, who cuts her off with a spinebuster for a near fall of her own. Back up and Rok-C grabs a quick Code Rok to retain at 13:30.

Dalton Castle still has a surprise for us.

Post break, Castle seems to start a song and dance number with the Baby Chickens but one of them breaks something, sending Dak Draper into a rage.

Everyone gets their own entrance, complete with rather personalized Christmas wish lists for their graphics, such as:

Johnson gets his big BAH HUMBUG entrance because he can’t stand any of his partners. Homicide drives Jay into the corner to start as we get some Ring of Honor history lessons from commentary. The lockup takes them over to the ropes so Woods can tag himself in. The rear naked choke has Homicide in trouble so he bites his way to freedom. They slug it out until Homicide yells at him and bails into the corner. Titus comes in and takes it to the mat with Woods, which doesn’t seem to be the best move. Woods counters a short armscissors in a hurry and we take a break.

Back with Taven dropkicking Gordon but getting taken down by a headscissors. Bandido comes in to face Gordon, with the latter walking on his hands. That’s fine with Bandido, who has an open shot for a superkick. Horus comes in and everyone drops off the apron because they know this is going to be good. They run the ropes but neither can go anywhere, with guest commentator Quinn McKay complimenting their hair. King and Mark come in with the latter taking him down by the leg.

Back up and some Red Neck Kung Fu staggers King, who hands it off to Titus instead. We get a Briscoes vs. King/Titus (the former All Night Express) showdown for another old times sake faceoff as everything breaks down. We take another break and come back with Horus forearming Castle and avoiding a charge into the corner. Horus hits a big dive onto Young as Gordon is watching from the commentary desk. Thankfully he comes back to his senses and dives onto a bunch of people in the aisle.

Back in and Homicide escapes Taven’s Climax but gets kneed in the face for two. Gordon Kinder Surprises Taven off the top, leaving Bandido to hit the X Knee on Horus. Back up and Horus hits a heck of a tornado DDT to plant Bandido but it’s time for the parade of finishers. Johnson rolls Mark up with tights for two so Mark strikes away against the ropes. The Cutthroat Driver sets up the Doomsday Device to finish Johnson at 20:45.

Everyone hugs and the Briscoes are lifted onto some shoulders as commentary talks about how this is pretty much it to wrap it up. 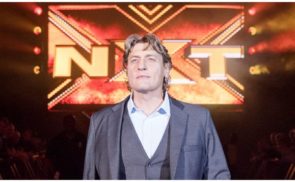