We are on the way to Final Battle and this time around we have a big time showdown between Jay Lethal and EC3. That’s the kind of a match that could go in a few different ways and it could be an interesting showdown. Now just build up something else for Final Battle and we should have a good week. Let’s get to it.

Danhausen has some teeth questions to start and gets punched in the face for his efforts. PCO comes in to chop/scream it out with Mark, who seems to enjoy this. A big shot puts Mark down and it’s Danhausen tagging himself back in. Jay comes in as well but Danhausen shouts that he isn’t ready, even as Jay knocks him down.

We take a break and come back with Jay unloading on Danhausen in the corner but Danhausen is back up with a surprise German suplex. PCO comes back in to clean house in a hurry but Mark hits him in the ears, triggering a malfunction. He’s fine enough to clothesline the Briscoes down though and Danhausen pours teeth in Mark’s mouth. A double chokeslam plants Mark, though Danhausen doesn’t seem to notice that PCO helps him. Cue Sledge to brawl with PCO over the barricade, leaving the Briscoes to send Danhausen flying. The Jay Driller gives Jay the pin at 8:54.

Matt Taven talks about how he has always wanted to be in Ring of Honor. You’ll see Ring of Honor again. That’s the first official mention of the changes.

Maria Kanellis-Bennett refuses to believe that the Ring of Honor spirit will ever die.

Scott is challenging and says she should have already been the champion. Rok-C talks about being a fighting champion in a fairly generic promo. The much bigger Scott shoves her away to start and then crouches down for the test of strength. A wristlock works for Scott and she pulls Rok-C into a bodyscissors to keep her in trouble. They run the ropes and Rok-C bounces off of her in a shoulder attempt. Instead Rok-C tries some armdrags to no avail but she does manage to knock Scott outside.

Back in and Rok-C can’t get a wristdrag out of the corner, allowing Scott to blast her with a clothesline as we take a break. Back with Rok-C being whipped hard into the corner and getting taken down with a Russian legsweep for two. Rok-C grabs a quick guillotine, which is broken up just as fast. Back up and a Thesz press lets Scott hammer away and the Rok Knees get two. The Crossface is broken up and Scott spears her in half, as tends to be the case in a lot of matches today. Rok-C isn’t having any more of this and knees her down, setting up the Crossface for the tap at 9:05.

Shane Taylor talks about how much Ring of Honor means to him.

Josh Woods talks about how Ring of Honor made him a star.

EC3 talks about how need leaders and that is not going to be Lethal, especially with a phony speech like he gave at Death Before Dishonor. On the other hand, Lethal says he hasn’t heard anything from the Foundation in a few days. Now he needs to find this footage of him, but his mind isn’t on EC3. Lethal circles him to start and works on a wristlock for a bit. A hard shoulder puts Lethal on the floor and commentary thinks he isn’t all there.

EC3 is nice enough to hold the ropes open for him and Lethal uses the distraction to hit a quick dropkick to knock EC3 outside for a change. Lethal sends him into the barricade a few times but EC3 is right back with a clothesline back inside. The Thesz press lets EC3 hammer away with right hands, setting up a snap suplex for two. EC3 knocks him outside in a hurry and shouts about how Lethal has no fight in him.

Back in and stereo crossbodies put both of them down but EC3 drives him into the corner for some shoulders. EC3 chops away in the corner and keeps talking about the same control your narrative stuff that I still don’t quite get. Lethal breaks up a superplex attempt and they both crash hard to the floor. Back in and a slugout goes to Lethal, who scores with an enziguri.

There’s the Lethal Combination to drop EC3 again so he tells Lethal to drop Hail To The King. Said elbow connects for two but the 1%er only gives EC3 two. EC3 asks when Lethal is going to give back to himself so Lethal hits a jumping cutter. Then the video of Lethal saying “I don’t even like the Foundation” pops up on screen, with the distraction breaking up the Lethal Injection. The cobra clutch stretch finishes Lethal at 15:11.

EC3 tells Lethal to think about himself and they shake hands, leaving Lethal confused to end the show. 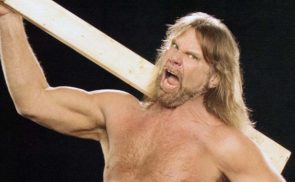