Now we have a special event as it’s the 500th episode. That means we have a major card, as it’s a double main event of Mark Briscoe vs. Jay Briscoe, plus Jay Lethal challenging Jonathan Gresham for the Pure Wrestling Title. In theory there is almost no way this show won’t work. Let’s get to it.

We open with a montage of the history of the TV show.

Quinn McKay welcomes us to the show and thanking us for being with them for so long. We run down the card, as picked by the fans.

Jay Lethal can’t believe he is here and is happy with the fans choosing his team with Jonathan Gresham face off. Lethal loves facing Gresham but then again, Gresham has almost broken his arm. Tonight, it would be disrespectful to not bring everything he had here. No matter what, the Foundation stays strong.

Gresham praises Lethal for everything he has done so far and knows what the World Title means around here. Well now the Pure Title might mean a bit more, because it means you are the best wrestler in the world. Tonight, it is time to see who really is the best in the world and Gresham is ready.

Gresham is defending and the two of them, plus the rest of the Foundation, come out together. Feeling out process to start with Lethal taking him down by the leg. With that broken up, Lethal goes with a test of strength to take Gresham to the mat, only to be kicked away for a standoff. Back up and they go with some grappling with Gresham headlocking him down four or five times in a row. Lethal tries to roll away and has to avoid a running kick to the arm as we take a break.

We come back with Lethal working on the arm, including driving a knee into the arm to soften it up a good bit. Gresham takes him down for a change and kicks at the arm, meaning the hammerlock goes on. Back up and they hit stereo shoulders, meaning they’re both in pain again. Gresham gets in another armbar and cranks back on the hand before switching into a cradle for two. Lethal manages a quick cutter for two more, with a rope break being used to get him out.

We take another break and come back with Lethal grabbing a Boston grab to make Gresham use another rope break. With that broken up, Lethal slaps on a Crossface into the Rings of Saturn so Gresham uses his final break for the escape. Back up and Gresham grabs a headscissors so Lethal tries to kick out….but Gresham cradles him to retain at 16:38.

Respect is shown post match and the Foundation is strong.

We look at the main event of the first show.

They take turns driving each other into the corner to start as commentary talks about the people who helped get us here. The pace picks up a bit with Mark snapping off a hurricanrana and it’s an early standoff. Jay takes him down into a front facelock which lasts all of three seconds. A chop puts Mark on the floor and Jay dives onto him as we take a break.

Back with Mark hitting a running dropkick through the ropes, setting up a Cactus Elbow off the apron. Mark suplexes him on the floor and grabs a Michinoku Driver for two back inside. Jey slugs away but walks into a high collar suplex to put him down again. They head to the apron with Mark knocking him to the floor, setting up a running neckbreaker (Mark: “NIGHT B****!”). They throw a chair in so Jay can hit a Death Valley Driver onto the chair, followed by a neckbreaker for two.

We take another break and come back with Mark hitting his own Death Valley Driver into the Froggy Bow for another near fall. Back up and the Jay Driller gets two so Jay hits a second but the mostly done Mark rolls outside. They fight over a table with Mark putting Jay onto it and the elbow drives him through the wood. Mark is the only one to beat the count and win at 15:14.

We get a quick graphic thanking the fans and the people who have been involved for 500 shows. 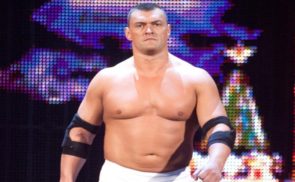