We’re still in the vacuum of the post pay per view stretch and that means it’s time for another stand alone show. This time around though we might get some videos inserted to talk about some stuff from Supercard of Honor. You never know what you might get from these shows match wise though so let’s get to it.

Hang on a second as Takahashi has to bow to Daryl. Feeling out process to start with Kazarian getting two off an early rollup and nipping into a standoff. They head outside with Kazarian sending him hard into the barricade, which may banged up his knee. Back from a break with Kazarian hitting his spinning springboard legdrop to the back of the head. A backbreaker keeps Takahashi in trouble so he superkicks his way to prosperity and a near fall of his own.

Takahashi sends him to the floor for a running knee from the apron with Kazarian sprawling across the floor. Back in and Kazarian slips out of the Time Bomb and hits a sloppy slingshot DDT. Kazarian isn’t happy with the near fall so he yells at the referee, allowing Takahashi to roll him up with trunks for two. Another superkick sets up the Time Bomb to end Kazarian at 11:04.

There are six teams involved and the winners get a Tag Team Title shot at some point in the future. Brian Milonas/Beer City Bruiser are in first with Shaheem Ali coming in and saying he’ll fight without LSG because Coast to Coast never gives up. Ali wastes no time in diving over the top to take Bruiser out but Milonas catches a crossbody back inside. Some elbows get the overly large man down and there’s a dropkick to the face. A standing double splash crushes Ali though and the beating begins. Bruiser backdrops him into a sitout powerbomb for two and we take a break.

Back with Ali headbutting them both down, followed by a lifting Downward Spiral on Bruiser. Not that it matters as a superplex into a frog splash gets rid of Ali at 6:28. Next up are the Dawgs, who offer beer but get kicked down for their efforts. The beer is spat into the monsters’ faces and a pair of double noggin knockers has some effect. Milonas is low bridged to the floor and a dropkick gets one on Bruiser. The size catches up with the Dawgs again though and Ferrara gets crushed in the corner as Milonas just sits on him.

Back from another break with Milonas missing a sitdown splash, allowing the hot tag to Ferrara. Titus manages a monkey flip onto Bruiser with Ferrara adding a tornado DDT on the floor. The announcers make Punch Out references as Ferrara bicycle kicks Milonas down. Not that it matters as Ferrara gets caught on top with a superplex sending Milonas and Bruiser on at 15:04.

The Motor City Machine Guns are in fourth with Milonas’ falling splash crushing Sabin. Bruiser kicks Shelley into a spinning side slam but misses the Cannonball in the corner. The rapid fire offense has the big guys in trouble and a double superkick rocks Bruiser. Skull and Bones gets rid of Bruiser at 16:52 and it’s the Young Bucks in fifth.

Back from another break with a double slugout, as should be the case with these four. It’s the Bucks taking over with their dropkicks until they both run into Shelley’s boots in the corner. A missile dropkick puts Matt down and he’s sent head first into Nick’s crotch. Stereo running boots in the corner have the Bucks in more trouble and there’s the Dream Sequence to Matt.

We hit the chinlock as the announcers talk about the Women’s Title tournament without actually saying who won the thing. The first superkick gets Matt out of trouble and a few more are enough for the hot tag to Nick. That means the slingshot X Factor and apron moonsault, followed by a suicide dive as things speed way up.

Double superkicks have Shelley down on the floor but Shelley gets out of the Meltzer driver. A superkick and spear set up a springboard splash/standing moonsault for two on Sabin. Shelley comes back in and tries Sliced Bread #2 but gets taken down instead. More Bang For Your Buck is broken up but Skull and Bones is countered into a backslide to pin Sabin at 26:29.

Back from one more break with the Kingdom beating on Matt as his back has flared up again. Marseglia can’t hit a Russian legsweep so he takes Matt down and puts a knee into his back for a chinlock instead. Matt gets in a shot but O’Ryan pulls Nick off the apron and takes his place. That earns him a superkick and Nick comes in off another hot tag. A big flip dive takes both Kingdom guys down but it’s too early for a 450.

Instead he gives O’Ryan a German suplex on the apron and a tornado DDT from the same apron to Marseglia. There’s the Sharpshooter on O’Ryan and Marseglia’s right hands aren’t enough for the break. Instead he grabs the ax but murder is a bit too far. The referee takes it away so Marseglia uses the bat to give O’Ryan two instead. Just a baseball bat shot you see.

Another shot misses and it’s off to Matt to forearm away until O’Ryan gets him in the bad back. Matt gets taken to the floor for a powerbomb on the bare boards but Nick makes the save with a kick to the face. The Meltzer Driver, with Nick helping Matt lift O’Ryan for the Tombstone, is good for the final pin at 37:02. 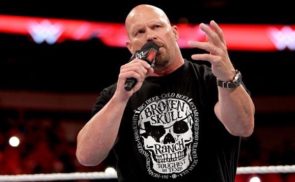 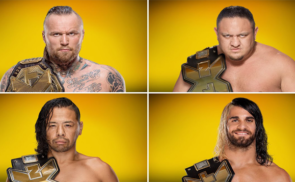