Add them to the list. Tag team wrestling has long since been a problem for WWE as the company does not have the best depth. Every now and then you will see a team rise up and succeed, but they are rather few and far between. Oftentimes the division is made up of a bunch of people with nothing better to do at the moment being thrown together and that might be the case again.

Monday Night Raw has all kinds of people on their roster without much of a direction. That is the kind of problem that should be easily fixed but you might be surprised by WWE’s inability to shake things off. There are several talented wrestlers who are unable to get off of the bench, but now two of them might be interested in teaming up to see what they can do together.

On Wednesday, Ricochet sent out a tweet suggesting that he and Jeff Hardy team up to go after the Raw Tag Team Titles. This came after he and Hardy teamed up to face Jaxson Ryker and Elias in a losing effort on this week’s edition of Main Event. Ricochet has been feuding with Retribution in recent weeks while Hardy had been tagging with Riddle as the Hardy Bros.

Hey @JEFFHARDYBRAND maybe WE should go after those Tag Titles!? ????

Opinion: I’m almost never a fan of this kind of booking but it isn’t like either of them are doing anything else at the moment. If there is nothing else for them to do in the eyes of WWE’s creative department, maybe this is the best thing available for both of them. I can’t imagine it goes long term but for a one off idea, I don’t see it being the worst thing in the world for either of them. 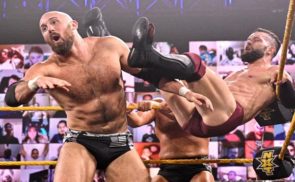