It’s the go home show for Armageddon and that means it’s going to be a lot more about Undertaker vs. Randy Orton. That’s the most logical way to go when there isn’t much else of note on the card. We do have the Raw vs. Smackdown tag match, but that’s hardly the most thrilling story in the world. Let’s get to it.

The opening recap looks at Undertaker’s supernatural stalking of Orton last week. Looking at this all together makes it look a lot dumber.

Boogeyman is officially “the weirdest superstar in sports entertainment history”. Vito is here with Nunzio and I can’t imagine that is going to help. The arena is full of smoke and Boogeyman shrugs off some early shots. Worms are consumed and the pumphandle powerslam is good for the fast pin.

The roster is watching in the back and Sylvan is disgusted. There are probably twenty people back there. Get more monitors.

Bob Orton is having Randy see a sports psychologist before Sunday.

We look at Undertaker vs. Shawn Michaels in the Cell.

Randy is on the psychologist’s couch and says he sees Undertaker everywhere, from in the car next to him to in the mirror behind him. The doctor wants to hear about the Cell and Orton freaks out about the idea even more. He needs some sort of control and the doctor tells him to pick one of two roads before him.

Batista is getting ready when Melina comes in and starts rubbing his shoulders. MNM is ready for their match against Batista and Mysterio but they have to face the Mexicools on Sunday. If Batista will withdraw from the match, she can make it worth his while. Melina winds up on his lap and the camera is no longer needed.

We see some of the Armageddon press conference. How low on the list do you have to be to get that assignment?

Kash is confused by having all three Mexicools here. Or maybe he’s wondering why they’re on riding lawnmowers. No seriously, why are they on riding lawnmowers? Who thought that was a good idea? Crazy monkey flips him to start and Kash is staggered early on. Kash heads to the apron and grabs a neckbreaker over the top rope to take over. Some knees and kicks keep Crazy in trouble but he grabs a tilt-a-whirl backbreaker. Crazy hits some dropkicks for two and a DDT sets up the moonsault….which only hits mat. The brainbuster gives Kash the pin.

Rating: C. Completely watchable match here as we get ready for Sunday’s title match. I’ll give them points for trying anything else in the cruiserweight division as there is only so much you can do with the same three or four people over and over. Kash might not be the best choice, but he’s better than the same matches over and over for years.

Randy gets done with therapy and tells Bob that he needs to make a decision. We’ll see what that is later.

Melina puts her shirt back on and Batista adjusts his trunks. Melina says they have a deal. Actually no, but Batista thanks her for the warmup. He’s ready to go kill MNM. As usual, Batista comes off as being smarter than everyone else around him, which was an important part of what got him over in the first place.

MNM is defending and Melina is ticked at Batista. Mercury and Rey start things off and there’s the required EDDIE chant. Mysterio starts in on the arm and gets two off an early sunset flip. It’s off to Batista as the arena is still full of smoke from the entrances. Nitro’s superkick is blocked and Batista hammers away in the corner. Mercury comes back in and his forearms have as much effect as you would expect. The champs are both clotheslined to the floor and Rey adds a moonsault to send us to a break.

Back with Rey headscissoring Nitro for two and hitting ten right hands to Mercury in the corner. A distraction lets Nitro hit a slingshot powerbomb for two and there’s a clothesline to the back of Rey’s head. Nitro grabs a backbreaker into a Russian legsweep and Melina pulls Rey outside for a crash.

Back in and Mercury drives Rey back in to keep the ring cut off, because old school wrestling still works if it is done right. Melina has to offer a distraction so the champs can pull Rey back into the corner. Mercury takes him up so Rey snaps off a super hurricanrana, finally allowing the hot tag to Batista. Everything breaks down and the 619 hits Melina. The Batista Bomb finishes Mercury for the pin and the titles.

Rating: C+. This was a formula tag match to make Sunday’s Raw vs. Smackdown match champions vs. champions. Odds are the titles will change back in a few weeks (at most) and while it is annoying that MNM lose the titles again, it’s not like this is anything more than a short form title change. And the Melina/Batista deal was funny for a bonus.

We look at Undertaker chokeslamming Rikishi off the Cell.

William Regal is with Burchill. Lashley throws him outside to start and hits some shoulders to the ribs in the corner. A belly to belly into the Dominator finishes Burchill in a hurry.

Matt Hardy is ready for Booker T. tonight when JBL, on crutches, interrupts. That’s not cool with Matt, though JBL knocks him down anyway, triggering a brawl.

Teddy Long talks to the psychologist, but the session with Randy is confidential. He thinks the Cell match is barbaric and storms off.

Batista and Rey are happy with their win so here’s Randy to interrupt. Randy congratulates them and we get a tense handshake.

One time, Undertaker threw Mankind off the Cell.

JBL is on commentary and Sharmell, with a broom, is in Booker’s corner. Joined in progress with Booker knocking him into the corner but Matt slugs him over the top. A JBL distraction lets Booker kick away and the chinlock goes on. Matt fights up and hits a neckbreaker into a bulldog for two. There’s the Side Effect to set up the top rope legdrop for two more but Sharmell offers a distraction. JBL gets in the Clothesline and Booker hits the ax kick for the pin.

Rating: C-. Just a match here as we set up Matt vs. JBL on Sunday and keep Booker warm for the US Title match. It’s not like Booker loses anything by having someone interfere either, making this a fairly well put together match. Not that the match itself was good, but the setup was and that’s more important.

Randy tells his dad that yes, he is sure about this.

Here’s Randy for his big announcement. He has accomplished a lot in his career, including his Survivor Series success and being a certified legend killer. What he’s learned now though is no one can’t destroy the legend of the Undertaker. Undertaker has destroyed everyone in the Cell but that won’t happen to him.

When he was on that couch, he realized something. He isn’t going to have his grandkids on his lap and let them believe that he gave up. So he’s going out on top, meaning he’s retiring right now. He’s killing his own legend, right now. Cue Teddy Long to say not so fast. If he doesn’t show up on Sunday, it’s going to be a big lawsuit. Randy isn’t happy….and there’s the gong.

Cue the druids followed by the Undertaker so Orton immediately begs off. One of the druids pulls out the urn and it’s Bob Orton, allowing Randy to jump Undertaker. The RKO drops Undertaker but he sits up, meaning Randy chairs him right back down. Another (unprotected) chair shot to the head still can’t keep Undertaker down, though it can bust him open. It’s an urn shot to the head. Orton unloads with the chair and promises to end Undertaker to end the show.

Overall Rating: C. This was almost all about the Orton vs. Undertaker and Raw vs. Smackdown matches, which works out well enough. Sunday should be a big event and then Raw gets to take the next night off because of Tribute to the Troops. Then we can get on to the Royal Rumble build, which could go a few different ways this time around. Not a bad show here, but it’s getting close to the finish line before we can start the new year in a big way. 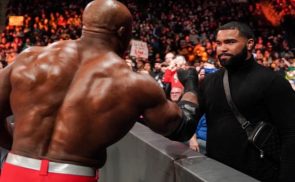