REVIEW: New Japan Lonestar Shootout: Half Of A Heck Of A Night

So this is an interesting one as it is part of the NJPW Strong promotion, but there were two shows taped here. First up was the Lonestar Shootout special, followed by a regular TV show. That wasn’t mentioned during the night so this will be split in two rather than the one night that I watched it live. Let’s get to it.

I don’t follow New Japan Strong so I apologize in advance for missing any storylines or character details.

I was in the arena for this show, sitting across from the entrance.

Student vs. teacher. They fight over arm control to start with Romero taking him down but Narita is back up with a chop. Narita’s spinwheel kick is countered into a half crab, sending him straight to the ropes. Some more kicks rock Romero but he’s right back with a qick tornado DDT.

Narita gets annoyed at some forearms so Romero forearms him even harder and hits a double stomp for two. Back up and a leg lariat drops Romero but a suplex attempt is blocked. The running Sliced Bread gets two on Narita so Romero blasts him with a running clothesline. Romero charges at him again but gets caught in a bridging belly to belly for the pin at 7:42.

Rating: C+. Nice hard hitting opener here with a surprise finish as Narita winning came out of nowhere. Romero putting someone over is not a surprise whatsoever but I wouldn’t have expected a Young Lion to win here. Good way to start the show as the fans are brought into things, which is exactly the point of something like this.

Dorada takes Knight up against the ropes to start so Knight grabs a headlock. A run up the ropes sets up a high angle wristdrag to drop Dorada before they trade armdrags and nip up for a standoff. Connors comes in to chop away at Garcia before it’s quickly off to the eager Uemura. A dropkick drops Garcia as commentary talks about the importance of excursions. Knight comes in and knees Uemura in the ribs, setting up a sliding clothesline for two.

Uemura gets caught in the wrong corner so Robinson can come in and headbutt him down. There’s the Cannonball from Robinson into a belly to back from Finlay for two as the….I have no idea if they’re good or bad….team takes turns beating on Uemura. A belly to back suplex gets Uemura out of trouble and it’s the hot tag to Connors to clean house.

Everything breaks down and the double knockdown sets up the double tag to Fredericks and Knight. The slugout is on until Knight hits a heck of a dropkick. Uemura starts snapping off suplexes until Robinson cuts him off with a spinebuster. Dorada hits a big flip dive to the floor, leaving Fredericks to hit Manifest Destiny (implant DDT) to finish Knight at 10:45.

Rating: B-. They kept the pace fast here and that is what you need to do when you have that many people in there at once. Fredericks had a good DDT and the other younger stars got to showcase themselves well here. Uemura continues to seem ready to be a breakout star and Knight looked good too. Nice way to show off a bunch of stars at once and it flew by for a bonus.

I think you get the idea here, with commentary more or less saying a match like this doesn’t need any kind of a build. Suzuki goes after the arm to start before grinding away on a headlock. Kross fights up and knocks him to the apron, where trash talk can ensue. You don’t do that to Suzuki, who grabs an armbreaker over the ropes to take over again.

They fight outside with Suzuki striking away but Kross gets right in his face. Kross gets beaten up around the announcers’ table before they head back in, with Suzuki looking eerily….happy. The armbar goes on, with Suzuki getting to bend the fingers back to make it even worse. Kross is able to block the penalty kick though and grabs a throw for two. That doesn’t work for Suzuki, who grabs a Fujiwara armbar. Kross makes the rope so Suzuki tells him to “COME ON F****** YOUNG BOY!”

They chop it out with Suzuki making Kross take a step back, only to have him call Suzuki young boy. That doesn’t seem like a good idea so Suzuki goes for the choke, only to get pulled into the Krossjacket. Suzuki breaks that up, calls him a young boy again, and hits the Gotch Style piledriver for the pin at 9:45.

Rating: B-. They were right when they said that this was going to be little more than a fight of two people hitting each other really hard and that is what they delivered. Suzuki is past his prime but he is in full on legendary status, where just seeing him in the ring is something special. Taking someone like Kross apart like that made it even better and this was fun while being exactly what you expected.

And now, here is an unadvertised Jon Moxley for a chat. Moxley says he wasn’t going to leave Dallas without setting foot in a New Japan ring. This ring brings out the fighting spirit and the best in him, which is what fostered his love of wrestling. He is so happy with how many people are here and it doesn’t matter what show they watch because it’s all about wrestling. On a more personal note though, he is tired of Will Ospreay hiding behind a Twitter handle. Moxley wants the scary version of Ospreay on April 16 and it is time to make an example out of him.

This is part of White’s US Of Jay Open Challenge series. They both tease kicks to the….something in the corner before White headlock takeovers him down. That doesn’t last long as Bailey is right back up with the bouncing kicks to send White to the floor. Naturally that means a running flip dive but White is back up with a TKO across the top. The chinlock goes on but Bailey is right back to his feet with the chops.

Some kicks set up the running corkscrew shooting star press for two and Bailey avoids a charge in the corner for a bonus. It’s too early for the Ultimate Weapon so White sends him to the apron, where Bailey avoids a charge and hits a perfectly times Asai moonsault. They fight back up to the apron with Bailey missing the moonsault knees, allowing White to grab a swinging Rock Bottom for two. White wisely grabs a leglock but Bailey (eventually) gets to the rope.

Back up and Bailey fires off kicks to the chest (here we go) but he has to flip out of a sleeper suplex. The Bladerunner is blocked and Bailey kicks him down, setting up the moonsault knees. Bailey limps a bit (this is progress for him) before hitting the spinning kick in the corner. The Ultimate Weapon misses though and White drops him with a sleeper suplex. Now the Bladerunner can finish White at 14:10.

Rating: C+. Bailey’s horrible selling brings this WAY down again as otherwise they had a heck of a match. The problem is you can only do so much with that when Bailey will barely sell anything. I know he’s supposed to be all about speed, but if he can’t be slowed down with a bunch of work on the knee, he’s Superman rather than the Flash and that doesn’t work at all.

Dickinson takes him down by the arm and works on an armbar as commentary explains that there will be a Strong taping after this match wraps up the show. Back up and they trade shoulders to no avail until Dickinson gets in a hard shot to take him down. The chop off goes to Ishii but Dickinson drops him with an elbow to the face.

They fight to the floor with Ishii sending him hard into the barricade before going back inside. Dickinson tries another chop which just fires Ishii up. The forearms seem to make Ishii come at Dickinson harder and a German suplex sends Dickinson flying. Another suplex wakes Dickinson up and he hits a brainbuster, only to have Ishii pop up for the double knockdown.

They both get fired up for the forearm off until Ishii headbutts the yelling Dickinson down. A heck of a clothesline gives Ishii two but Dickinson is back up with an enziguri. Dickinson’s brainbuster gets two but Ishii slips out of a Razor’s Edge. The sliding lariat sets up the brainbuster to give Ishii the pin at 16:11.

Rating: B-. Much like Suzuki vs. Kross, this was a pair of big, strong guys hitting each other really hard until one of them couldn’t get up again. Also much like Suzuki, Ishii isn’t quite what he used to be but is still more than capable of getting in there and making something feel special. That is what he did here and Dickinson, while game, wasn’t going to get a win in a spot this big.

Post match, Minoru Suzuki comes out for a staredown with Ishii to end the show.

Overall Rating: B. It’s still weird cutting the event in half but what we got here was quite good. Granted it was short at less than an hour and forty minutes, but I’ll take what I can get. New Japan stars are not here very often and it still feels special to have them around, even for something like this. There are some very hard hitting matches here and the show flew by so we’ll definitely call this one a success. 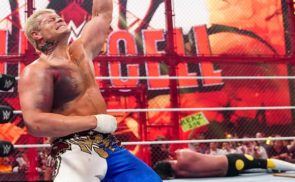 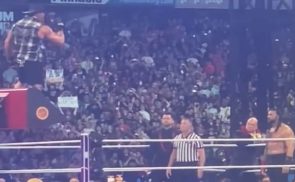