The incredibly busy week for WWE continues as we head over to a place where Thanksgiving is just another Thursday. The big story around here has been Gallus vs. Imperium, which has the potential to be a heck of a feud under the right circumstances. There is almost no way of knowing what we’ll be seeing here though, as things can go in a variety of directions in this promotion. Let’s get to it.

The opening recap focuses on Gallus vs. Imperium, with some extra attention going to Ilja Dragunov. Alexander Wolfe cheated to beat Ilja Dragunov last week and it was a big beatdown until Gallus made the save.

Jazzy Gabbert is here with Jinny. Niven starts with the big shoves and Jinny can’t do much against the size and power. A missed charge into the corner gives Jinny a break though and Jinny gets two off a slingshot hilo. The Iron Octopus sends Piper down to one knee before powering out. Jazzy trips her up though and that’s good for an ejection.

Niven drops a big elbow for two as Nigel is wondering how Jinny can survive without her best friend. A headbutt knocks them both down but it’s Piper up first to snap off a belly to back suplex. Jinny gets caught on top and it’s an electric chair faceplant to give Piper two. Piper gets kicked in the face for two so she dropkicks Jinny hard into the corner. The Cannonball sets up the Michinoku Driver for the pin on Jinny at 7:28.

Post match Niven calls out Kay Lee Ray for a Women’s Title shot. Cue Ray to slap Niven in the face and the fight is on. It’s Toni Storm running out to go after Ray as well, which seems to confuse Niven more than anything else.

Dennis isn’t about to have his wristlock broken to start so Gordon tries again to some more success. Not that it lasts long though as Dennis reverses into a cravate, only to have Gordon come back with a dropkick. Dennis knocks him outside for a hard right hand and the beating continues in the corner. The cravate goes on again, setting up the Severn Bridge into the Neck Stomp Driver for the pin on Gordon at 4:08.

Fallout from Dar attacking Oliver Carter last week. Smith powers him into the corner to start and a quick throw has Dar hiding in the corner. Dar’s sunset flip doesn’t work as Smith powers him up and hits a dropkick out to the floor. Back in and Dar’s running shoulder bounces off of the bigger Smith so he goes after the knee for a smart change of pace. A few forearms to the back are shrugged off for the sake of Smith’s very delayed vertical suplex.

They head outside again but this time Dar bounces off the ropes and hits a quick forearm to the face to take over. Back in and Dar starts in on each of the limbs, meaning we get the required Ronnie Garvin reference. Some kicks to the shoulders look to set up the Rings of Saturn but Smith elbows his way to freedom. Smith is right back with a Death Valley Driver for two of his own but Dar kicks him in the face. The Nova Roller is countered into a Blue Thunder Bomb to give Smith two more as the fans are behind Dar again. Dar hits a running kick to the face and it’s the Nova Roller for the pin at 7:46.

Next week: A-Kid vs. Jordan Devlin and Conners vs. Ligero vs. Banks.

Wolfe and Wolfgang start things off with Alexander taking over and pulling Wolfgang over to the corner. Aichner comes in to work on the arm and it’s Barthel doing the exact same thing. That’s broken up though and it’s Joe Coffey coming in for a tilt-a-whirl backbreaker to Wolfe. A running elbow to the back of the neck gets two and it’s Dragunov coming in for the wild running forearms.

Aichner has some better success with stomping and uppercutting in the corner. Dragunov runs him over though and even smacks Walter in the face, drawing everyone in for the big staredown. We settle back down a bit and Dragunov gets sent outside with Walter getting in a big boot to take over. It’s Dragunov getting beaten down in the corner with Walter getting to come in and pull on his own trunks a lot. The nerve hold goes on as the fans get in a disturbing/amazing JOLLY WALLY chant.

One heck of a chop rocks Dragunov again and it’s back to Wolfe to stomp away in the corner. Aichner cuts off a dive over for the hot tag attempt and it’s Barthel grabbing a chinlock. Back up and a hard clothesline gets Dragunov out of trouble but Wolfe breaks up the hot tag attempt. Dragunov clotheslines him down though and there’s the hot tag to Mark Coffey to clean house. It’s already off to Wolfgang and everything breaks down with Wolfgang backsplashing Aichner for two.

Mark gets caught in a spinebuster into a kick to the chest but Dragunov catches Aichner with Torpedo Moscow. The big double tag brings in Walter and Joe so it’s hoss fight time. Joe can’t German suplex him so he settles for hammering away in the corner. Walter’s running dropkick sends Joe into the corner as well though and it’s time to start throwing people to the floor. Dragunov and Wolfe fight into the crowd and the match is finally thrown out with the double DQ at 15:32.

Result: Imperium vs. Gallus/Ilja Dragunov went to a double DQ when everyone brawled on the floor (15:32) 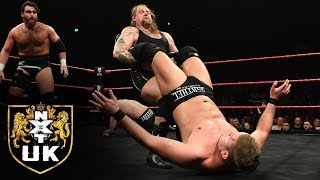 Post match everyone keeps brawling with Joe knocking Walter down to end the show. 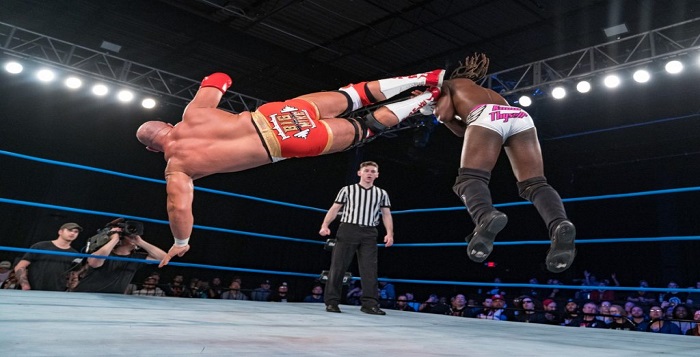