We’re back in England and the big story this week is the explanation from Trent Seven, even if it might seem pretty obvious why he turned on Tyler Bate. Other than that, we have Fallon Henley vs. Emilia McKenzie, as the NXT invasion continues. I’m sure this won’t be anything that annoys long term NXT UK viewers so let’s get to it.

We open with a recap of Ashton Smith and Oliver Carter vacating the NXT UK Tag Team Titles last week, with Josh Briggs and Brooks Jensen winning them in the show’s main event.

This is Davenport’s first match since injuring her ankle in November. Davenport throws her down to start but Hayze grabs a front facelock. That doesn’t last long as Davenport hits a basement dropkick and we hit the chinlock. Some running knees give Davenport two as Nigel gets in a Chamber of Secrets reference. Hayze comes back with a running faceplant, only to get blasted with a middle rope dropkick. The Falcon Arrow is countered into a guillotine choke but the second attempt plants Hayze for the pin at 5:34.

Post match Davenport says she is here to crush our hope.

Kenny Williams is in Sid Scala’s office (without permission) and thinks Tiger Turan is after him. Turan comes in and Williams wants the mask off before leaving. Of note: a paper Williams put on the wall says AMIR.

Noam Dar and Sha Samuels interrupt Mark Coffey’s training session. They talk about the upcoming Heritage Cup title match, with Samuels offering 100-1 odds on Mark. Other wrestlers run in and can’t wait to bet on it. Dar isn’t pleased.

McKenzie takes her down by the arm to start but Henley is right back up with an armbar of her own. Back up and we get a handshake before they trade rollups for two each. Henley knocks her into the corner and gives a tip of her non-existent hat. A neckbreaker drops Henley for two more though and the chinlock goes on.

Some rollups annoy McKenzie so she elbows Henley down and grabs the cobra clutch. Henley fights up and hits some forearms but a faceplant cuts her right back down. A jump out of the corner jams Henley’s knee though and McKenzie spears the leg out for some extra aggression. That’s fine with Henley, who is back with a sunset flip for the pin at 8:33.

Oliver Carter misses Ashton Smith but here is Die Familie to offer him a spot on the team. Carter doesn’t say no.

Sarray is training but Xia Brookside and Eliza Alexander come up to mock her. Meiko Satomura comes in to not have any of this.

Noam Dar is here with Samuels. Wolfgang throws Samuels out of the corner to start and we’re already in the armbar. The lifting armbar cranks on the arm again and we’re back to the armbar as commentary wonders about Samuels’ gambling issues. Back up and the spear only hits buckle, allowing Samuels to take him down by the arm. Dar’s distraction makes things even worse and Samuels snaps the arm across the top.

A middle rope elbow gives Samuels two but Wolfgang is back with a knee to the ribs. Some chops in the corner rock Samuels but he counters a top rope ax handle into a spinebuster. Wolfgang hits a quick spear for a double knockdown though and they get a breather. Back up and the arm is snapped across the top again, leaving Wolfgang crashing down. Samuels’ top rope splash crazes Wolfgang’s feet, setting up a buckshot spear for the pin on Samuels at 10:21.

Here is Trent Seven for his big explanation. Since two weeks ago, the question has been WHY TRENT WHY. We look at a still of Seven hitting Tyler Bate low to officially turn on him, which is the most important moment in British sports. The thing is, Seven did it for NXT UK. This place was dead and look at hoe energetic everyone is now!

Seven talks about how great Moustache Mountain and British Strong Style was, but then Bate was the one who changed. Now Bate is some tree hugging hippie and everyone knows that he isn’t going to come back and fight Seven. That’s because Seven IS British Strong Style and Moustache Mountain. Seven goes to leave but yells at a fan, who jumps the barricade and gets kicked low to end the show. 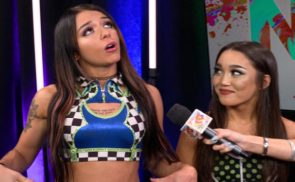