It’s a title night as Meiko Satomura is challenging Kay Lee Ray for the Women’s Title. The two of them had quite the showdown back in March and it could be great to see what they could do again with the stakes at a high level again. Other than that, Walter is back and that means we could be in for an important appearance. Let’s get to it.

Here is Walter for the first time in about two months to get things going. Walter talks about his title defenses in two days on two continents. Now he is the longest reigning champion of the modern era but his mission has never changed. His goal is to make this title prestigious and keep the ring sacred. And that’s it.

Subculture is ready for Jinny and Joseph Conners next week.

The bigger Huxley powers him into the corner to start and hits a knee to Devlin’s ribs. A headlock grinds Devlin down but he low bridges a charging Huxley outside. That doesn’t seem to bother Huxley, who drops Devlin throat first across the barricade. Commentary is stunned by the dominance as Huxley pulls him shoulder first into the post. Back in and a Thesz press drops Devlin again so it’s a rake to the eyes to cut Huxley off. Some kicks to the ribs keep Huxley down but he is right back up with a sitout chokebomb for two. Huxley puts him in a fireman’s carry but Devlin slips out and the Devlin Side finishes Huxley at 6:24.

Gallus is annoying Sid Scala when Sam Gradwell pops in. Then he pops out, leaving Gallus to be told they might get a match they want, possibly vs. Gradwell.

Eddie Dennis is here with Symbiosis (T-Bone/Primate) and Pretty Deadly is on commentary. Primate hammers on Moloney to start and cranks on the head. It’s off to Wild, who scares Primate into the corner for the tag to T-Bone. A snapmare into an elbow gets two on T-Bone, who is right back with a fall away slam. T-Bone holds up Moloney for a top rope ax handle to the back and a pair of stomps get two. Moloney finally gets in a few shots of his own and brings in Wild to clean house. That just earns him a belly to back suplex though and a spear drops Wild again. A powerslam into a top rope headbutt finishes Moloney at 6:10.

Teoman doesn’t like Oliver Carter getting in his way and wonders if Ashton Smith would even help him.

Next week: Sam Gradwell vs. Wolfgang and Joseph Conners/Jinny vs. Subculture.

Ray is defending and we get the Big Match Intros. Satomura kicks at the leg to start and forearms away in the corner. Ray can’t hit an early Gory Bomb attempt and bails to the floor from a fireman’s carry attempt. Back in and Ray hits a superkick for two and the chinlock goes on. With that broken up, Ray chops her against the rope for two and a clothesline sets up the trash talking.

A gordbuster sets up the Koji Clutch but Satomura reverses into an STF. Ray makes the rope and scores with an elbow, followed by some neck cranking. Satomura has to slip out of the Gory Bomb and it’s a DDT to plant the champ again. Back up and Ray nails a Death Valley Driver, only to walk into the Gory Bomb to put them both down. They trade kicks to the face, with Satomura smiling before hammering away again.

Ray is back with a tornado DDT for two but Satomura pops back up. Two superkicks make her pop up again so there’s a third, which just fires Satomura up enough for a Death Valley Driver. Another superkick from Ray sets up the Gory Bomb which sets up a Swanton for a rather near fall. Ray teases walking out but walks into a Death Valley Driver on the floor.

That barely slows Ray down and she hits the Gory Bomb onto the apron. Back in and they head up with Satomura managing a sunset bomb for a rather close two. Satomura grabs a sleeper but Ray gets over to the rope. Ray’s attempt at a Koji Clutch doesn’t work so it’s Scorpion Rising to give Satomura the pin and the title at 18:27.

A lot of replays and celebrating, including red and yellow streamers, end the show. 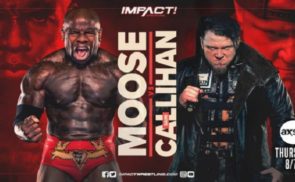