It’s the second title week in a row around here as we follow up last week’s United Kingdom Title match with a Women’s Title match as Meiko Satomura defends against Blair Davenport. At the same time, we have the finals of the #1 contenders tag team tournament, which could be a good one. I continue to have high hopes for this show and that isn’t something you get to say very often these days. Let’s get to it.

We open with a look at the Japanese street fight between Meiko Satomura and Blair Davenport.

The winners get a future Tag Team Title shot at Moustache Mountain, who is on commentary. Carter works on Starz’s wrist but can’t get very far as Starz takes him to the mat. An armdrag into an armbar works a bit better on Starz as Nigel tries to drive some tensions among the champs over the Heritage Cup. Mastiff comes in for a big headlock on Smith but it’s right back to Starz.

This time it’s Carter headlocking him down but Starz isn’t having that either. Instead Mastiff comes in and shrugs off some dropkicks before missing a springboard moonsault press. Everything breaks down and Carter/Smith clear the ring so Mastiff takes a breather on the floor. Back in and Starz dropkicks Smith twice before being backdropped outside.

Something like Private Party’s Silly String into a moonsault gets two on Starz and Smith slams him down for the same. A Doomsday Device is loaded up but Starz fights his way off of Smith’s shoulders. The hot tag brings in Mastiff to clean house but Starz already wants back in. Mastiff waves him off and hits a German suplex, only to miss the Cannonball. A shot to the face drops Mastiff and an assisted moonsault finishes for Carter at 12:32.

A-Kid is ready to team with Saxon Huxley but isn’t sure about his mind. Therefore, we see a montage of A-Kid working with Huxley on mat, chess and manners. This goes very badly (Huxley ate a chess piece).

Nathan Frazer’s car won’t start as he is leaving the Performance Center. As he checks on the engine, Die Familie jumps him from behind.

Dawn drives her into the corner to start but gets caught with a dropkick for a fast two. That doesn’t work for Dawn, who chokes on the ropes and hits a running knee to the face. A headscissors gets Grace out of trouble though and it’s a 619 to the ribs into a tornado DDT for two. Dawn is done with this though and hits a fireman’s carry spun into a side slam for the pin at 2:58.

Amale’s interview is turned into the Nina Samuels Show. That’s not cool with Amale, so a match is set for later.

Sam Gradwell doesn’t like Kenny Williams and violence seems to be implied.

Gallus tries to put a bet down on themselves with Sha Samuels but the store is closed at the moment.

Satomura is defending in a street fight. Davenport’s kendo stick is kicked away to start and they’re on the floor early, with Davenport missing a chair toss. A whip sends Satomura into the barricade but Davenport talks too much trash. The distraction lets Satomura chair her in the ribs and whip out some nunchucks.

That’s broken up so they head back outside for another whip to send Satomura into the barricade. A chain is pulled out but Satomura wraps it around her foot for a kick to the chest. Davenport canes her in the leg though (with Nigel getting in a Harry potter reference by saying “Enemies of the heir beware” in regards to Davenport).

Back in and Davenport pulls out an extra turnbuckle, only to get pulled into a failed STF attempt. Some kendo stick shots to the back have Satomura in trouble so she makes the rope. That doesn’t make a difference, but Davenport lets her go anyway. Satomura goes to the apron and Davenport goes up for a double stomp, only to land on the floor awkwardly. That’s enough for a referee stoppage to retain Satomura’s title at 9:42.

Davenport is taken out on a stretcher as Satomura quietly celebrates to end the show. 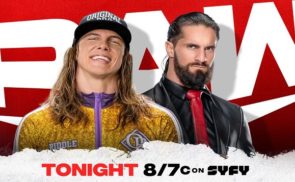