We’re still in Phoenix and this time around we have a heck of a card, including a Tag Team Title match as the Grizzled Young Veterans defend the titles for the first time. The arguably bigger draw though is Walter, who will be facing Kassius Ohno for his biggest challenge to date. Let’s get to it.

Feeling out process to start with Gallagher kicking him away and going for the leg but Bate is in the rope. Now it’s Bate taking him to the mat for a hammerlock but Gallagher walks on his hands for an anklescissors to take Bate down. Bate’s handstand counter doesn’t really work so he bounces around a bit until he’s able to flip out of the hold in another sweet counter sequence.

Gallagher switches to the ankle by allowing Bate to grab a foot, knowing that he can counter into a better hold for some rather scientific style. That’s escaped as well and Bate traps one arm to pull on the other. Gallagher is up again for a stomp to the knee and a rather nasty Indian deathlock. Bate slips out again but still can’t maintain a hold of his own.

Instead Gallagher pulls him into Eddie Guerrero’s Lasso From El Paso but lets go as Bate is getting too close to the rope, switching over to an arm pull. With the submission attempts not working, Gallagher tries a sunset flip but Bate rolls over into a cradle, sending them around the ring for a series of one counts that lasts a good twenty seconds. That’s broken up and Bate grabs a quick rollup for the pin at 9:47.

Jordan Devlin jumped Travis Banks at the UK Performance Center with wrestlers and trainers breaking it up.

Eddie Dennis talks about rupturing his pectoral muscle just over a year ago. Then he signed with WWE that May because adversity motivated him. Now he’s back and more vindictive than ever, so he’s taking down the roster one by one.

A test of strength goes to Walter, even as Ohno tries to take the knee out. Walter wristlocks him into an armbar and Ohno makes the mistake of chopping him. One heck of a big boot sends Ohno outside as Nigel compares Walter to the early years of Andre the Giant: stand there and don’t be aggressive, but attack when someone comes near you.

Ohno gets in a backsplash to the arm as Walter gets back in and pounds away with forearms in the corner. The cravate is broken up with a hard shove and they go to the strike off with Walter chopping him in the back. A big German suplex drops Ohno and a running seated senton gets two. Ohno knees him down but misses a moonsault, allowing Walter to dropkick him into the corner. The powerbomb finishes Ohno at 8:37.

Ligero is willing to beat up Joseph Conners again if he has to.

Next week: Ligero vs. Conners and Banks vs. Devlin in a falls count anywhere match.

James Drake and Zack Gibson are defending. Drake grabs Burch’s arm to start as it’s the early setup for Gibson’s Shankley Gates. That’s reversed into a regular armbar and then a hammerlock as Burch takes over on the mat. Gibson comes in and punches Burch in the face, giving us a nice mixture of the first two matches. It’s already back to Drake, who gets slapped in the chest so Burch can bring Lorcan in. Drake pokes Lorcan in the eye and sends him into the post as the champs take over for real.

Back in and the chinlock goes on, followed by a nerve hold to really mix things up. Gibson gets two off a belly to back and it’s right back to the chinlock. Somehow, Lorcan is able to fight off a variety of chinlocks and bring in Burch for the suplexes. A middle rope dropkick sends Drake into his own corner so Burch forearms Gibson off the apron. Everything breaks down with Lorcan getting knocked outside, setting up the Ticket to Ride for two on Burch. A pair of headbutts get Burch out of trouble though and Lorcan comes in with a double Blockbuster.

It’s already back to Burch (that was fast) with a Doomsday Device getting two as Gibson backdrops Lorcan onto the cover for the break. All four come in and Lorcan (legal) grabs the half crab on Drake as Gibson (also legal) puts Burch in Shankley Gates. The slap off breaks the holds and it’s Lorcan hitting a running dive to take out both champs. Back in and the elevated hanging DDT gets two on Drake so Burch punches him in the face. Lorcan gets knocked to the floor though and the Ticket to Mayhem finishes Burch at 13:08. 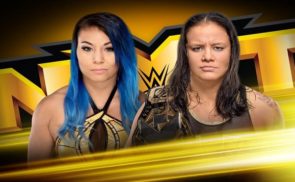 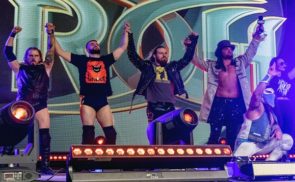