Things should be getting a bit more energized around here as we had the big showdown for the United Kingdom Title last week. Ilja Dragunov is going to need a fresh opponent after dispatching Wolfgang and a bigger one would be nice. This week is a title week also, as we have Meiko Satomura defending the Women’s Title against Sarray. Let’s get to it.

Here is United Kingdom Champion Ilja Dragunov for a chat….and he’s on crutches. Dragunov says he suffered a severe ankle injury during his title defense last week (insert clip here) and that means he cannot defend his title. Therefore it has to be vacated, but he isn’t going to talk about how hard this is for him.

Everyone back there is fighting hard every day and there is nothing special about him. He doesn’t regret anything he did in the ring and when he looks around the ring, there are bits of his soul all around the canvas. All he wanted to do was show that he could do this and the only person who defeats him is himself. Dragunov promises to come back for his title before laying the belt in the ring and walking away.

Chase University has come to London and see the sights, with Bodie Hayward wanting to stay at the Tower Of London. Then they go to the important place: the NXT UK Performance Center, where they find Sha Samuels basically destitute outside. Hayward has this one and thinks Shaw could make it into Chase U. This sends Shaw into a rant and we might have a match, partially due to Hayward being called a “stupid mark”. Hayward to Chase: “That guy works here?”

The rest of Die Familie is here with Raja. Carter doesn’t waste time and starts striking away, including a running dropkick to put Raja outside. A quick Charlie Dempsey distraction breaks that up though and Carter gets stomped down on the floor. Back in and a hard whip into the corner keeps Carter in trouble and we hit the abdominal stretch.

That’s switched into the same thing from Carter, which is broken up without much trouble. What looks to be a fall away slam is countered with a knee to Raja’s head and a springboard moonsault scores for Carter. There’s a dive to take out the rest of Die Familie, followed by the running spinwheel kick in the corner to finish Raja at 5:23.

Post match Die Familie comes in to beat Carter down.

Thea Hail is happy to be here but Eliza Alexander doesn’t like her. A match seems imminent.

Teoman is happy with what happened to Oliver Carter, because that was a win. Sam Gradwell comes in and implies he doesn’t like bullies.

The rest of Chase U is here too. Samuels is so broke that he has all of his possessions in a bindle. He also apparently smells bad as Hayward shoves him into the corner. The fans want Samuels to take a shower as he gets hiptossed and clotheslined. A neck snap across the top gets Samuels out of trouble and he elbows Hayward in the face. There’s a kick to Hayward’s back but he’s back up with the running shoulders to Samuels’ legs. The splash gives Hayward two but he misses a charge into the corner, setting up a spinebuster to give Samuels the pin at 4:45.

Samuels is REALLY happy with his win.

We recap Ilja Dragunov vacating the title. Here are the tournament brackets:

Satomura is defending, but hold on because here is Blair Davenport to interrupt. Apparently Satomura and Sarray aren’t here for some non-apparent reason. Davenport says Satomura keeps ducking her and the title reign is due to Davenport breaking her ankle months ago. Cue Amale to say hold on, with Eliza Alexander cutting them both off to complain about not getting the title shot. Davenport doesn’t want to hear this but Isla Dawn pops up behind her and says it’s her shot. Sid Scala says we still need a main event tonight so it’s Davenport vs. Dawn for the #1 contendership.

Dawn kicks her down to start and cranks on the ankle early on. Back up and Davenport manages some kicks into the corner, setting up the required leg choke. Davenport sends her to the corner where Dawn gets in a knee to the face for two, allowing her to flap her arms a bit.

A running knee to the face gives Dawn two more and we hit the chinlock. That’s broken up and they slug it out with Davenport getting the better of things. A basement dropkick gives Davenport two of her own but Dawn is back with a hard belly to back suplex for two more. Dawn hits a top rope Meteora for two, but Eliza Alexander pulls her out for the DQ at 7:12.

Post match Amale beats up Davenport and the huge melee has to be broken up to end the show. 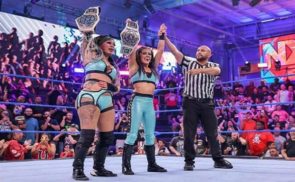