It’s time for a cool but also odd match as Meiko Satomura will be facing Aoife Valkyrie. That could go in a few different directions but it is a great test for the so far impressive Valkyrie. Other than that, we could be a long way off from the next main event story around here, but you never know with NXT UK. Let’s get to it.

This is Raja’s, who previously wrestled as Gursinder Singh in Impact Wrestling, debut. Raja takes him down to the mat to start so Teoman is straight over to the rope. Back up and Teoman starts cranking on the arm but a neckbreaker gets Raja out of trouble. There’s a slap to Teoman’s face so he elbows Raja down and kicks him in the face.

The neck crank doesn’t last long and Raja is back up with more shots to the face. Teoman dropkicks the leg out though and a quick DDT sets up the Crossface. They roll back into the middle and Teoman cranks on it even harder, eventually snapping Raja’s arm. That’s enough for the referee to stop it at 6:03.

Post match we see the replay and you can hear the snap when Teoman cranks back on the Crossface.

Video on Flash Morgan Webster, Mark Andrews and Dani Luna, all of whom enjoy skateboarding and being around graffiti. Their new name seems to be Subculture.

Dave Mastiff interrupts an Ilja Dragunov promo and a match seems to have been made.

Sid Scala brings out Kay Lee Ray for a chat. Ray wants a better introduction than that, because she has beaten everyone Scala and Johnny Saint has thrown at her. Scala agrees, so it is time to have a gauntlet match for the #1 contendership. That will include Jinny, Isla Dawn, Xia Brookside, Dani Luna and Emilia McKenzie. Ray says it doesn’t matter because none of them are beating her.

A-Kid is ready to defend the Heritage Cup against Tyler Bate in their rubber match in three weeks.

Muir actually shoves him away to start and a crossbody cuts Samuels off again. Samuels isn’t having this and runs him over, setting up some arm cranking. The Butcher’s Hook is broken up and Muir makes the clothesline comeback. A torture rack is loaded up so Samuels rakes the eyes to escape, setting up a spinebuster to finish Muir at 3:58.

Trent Seven says he is a founding father around here but Sam Gradwell pops up to say they signed on the same day. So why is Gradwell not as revered around here? Seven isn’t on Gradwell’s level.

Valkyrie is undefeated and bows to Satomura to start. The lockup sees Satomura driven into the ropes so she grabs a headlock and they roll around on the mat a bit. Satomura works on the arm but Valkyrie pulls her into a rollup for two. This time it’s Valkyrie working on the arm but getting sent into the corner for a running elbow. Valkyrie is back up with an enziguri to the floor, setting up a quick dive. Back in and Valkyrie slaps on a full nelson with her legs but Satomura slips out and starts kicking at the leg.

A reverse Figure Four sends Valkyrie very slowly to the ropes so Satomura kicks her in the head. Back up and Valkyrie nails another enziguri, followed by a sunset bomb for two. Satomura suplexes the heck out of her for another two but the Scorpion Kick is countered into a kick to the face. The moonsault gives Valkyrie two but Satomura is back up with a DDT. A running moonsault knee to the back rocks Valkyrie again and Scorpion Rising finishes Valkyrie at 10:37.

Symbiosis would be Eddie Dennis/Primate/Tyson T-Bone. Dennis bails away from the idea of having to fight Joe Coffey so it’s off to Primate. Joe is taken into the corner and the alternating beatdown is on, including a few shots from Dennis. An elbow to the face cuts him off though and Wolfgang comes in to work on the arm a bit. T-Bone tags himself in though and drives shoulders into Joe’s ribs in the corner and Primate adds a springboard ax handle.

The rapid fire stomping is on and it’s back to Dennis for a boot to the face. Joe manages to kick Primate and T-Bone down but Dennis is back in to cut him off. The Severn Bridge is escaped and Joe grabs a neckbreaker for a double knockdown. Wolfgang comes in off the hot tag and it’s time to clean house.

T-Bone manages a fall away slam so it’s Mark Coffey coming in to wreck a lot of people. Primate escapes a chokeslam and clotheslines Mark in the back of the head, allowing Dennis to grab a lifting Downward Spiral and spin him into a slam. Everything breaks down and Wolfgang spears T-Bone to the floor, leaving Joe to hit All The Best For The Bells to pin Primate at 9:27.

Result: Gallus b. Symbiosis – All The Best For The Bells to Primate (9:27) 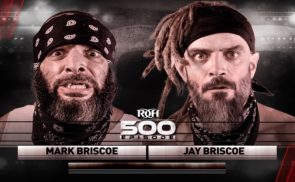