NXT Shaken Up By Coronavirus Outbreak

That’s not good. The Coronavirus has changed the way the wrestling world has worked and WWE has been hit incredibly hard. There are only so many things that can be done to move things around, but WWE has been doing as well as they can. This is the case not only the case on their main roster shows but down in NXT as well. Things might have to be changed again and in a big way.

There are only so many ways to run a wrestling promotion during the Coronavirus situation. NXT has several talents to pick from, but at the end of the day they are a fairly small roster and are in a fairly small building. It would be quite the trick to avoid having some kind of an outbreak and as it turns out, NXT has not been able to completely keep the virus out of their facilities.

According to Orlando reporter Jon Alba, NXT has recently suffered a Coronavirus outbreak and various changes have had to be made. The outbreak took place over the last several weeks and involved some classes at the Performance Center being canceled. Some of the problem included having people getting lax about wearing masks in areas where groups congregate. There is no word on who tested positive.

Multiple sources: there was a COVID-19 outbreak within #NXT recently. Working on the details, but sources indicate it may have had a decent effect on creative. #WWE

I'm working on confirming more details, but @SeanRossSapp has verified what I heard, quite literally as I hit "tweet." He indicates several PC classes were canceled, and the outbreak happened over the past couple of weeks. #NXT #WWE

Source indicates some have gotten relaxed with mask wearing, especially in spots where some people congregate and there was concern over that.

Am told people were still testing positive as recently as this weekend, with the belief being a coach accidentally spread it. #WWE #NXT

NXT has been doing well regardless. Check out some of what they have been doing as of late:

Opinion: Something like this was all but destined to happen at some point as there is almost no way around the whole thing. Wrestling shows take place in a small area with a lot of people involved. Throw in the Performance Center with the training facility and there is almost no way to avoid all of the dangers. Hopefully things seem to have calmed down, as the people’s health is more important than anything else.

What should NXT do? What else can any wrestling company do to make things safer? Let us know in the comments below. 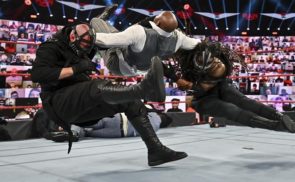 RETRIBUTION Was Not Received Well Backstage At RAW