Things got shaken up in a big way last week as Ilja Dragunov debuted to add quite the wild card. JD McDonagh is the new #1 contender to Bron Breakker’s NXT Title but Dragunov is going to be put into a top spot rather quickly. This should be interesting on top of everything else around here so let’s get to it.

Here is Ilja Dragunov to get things going. He has beaten a monster to win gold before and now he is ready to do it again. This time it isn’t Gunther though, but rather Bron Breakker. Cue JD McDonagh to call Dragunov a sneaky, dirty little rat and to say that he hopes Dragunov’s ankle is healed.

McDonagh offers to end Dragunov’s career but here is Breakker to interrupt. Breakker says the title isn’t going anywhere but McDonagh has an idea: Dragunov vs. Breakker with McDonagh being there for to face the winner. That doesn’t work for Breakker, who says if his math is correct, McDonagh has a 33 1/3 chance of winning. Breakker will see them at Halloween Havoc.

Gallus and Josh Briggs/Brooks Jensen are in a fight in the back.

The Schism is ready to hurt Cameron Grimes.

Non-title and the rest of Toxic Attraction is here too. Rose knocks her into the corner to start and grabs an abdominal stretch before grabbing an abdominal stretch. Henley hiptosses her way out of it and hits a swinging faceplant for two. Back up and Rose shoves her off, setting up the running knee for the pin at 5:35. Barrett: “Rose keeps knocking them out with those American thighs.”

Post match Rose says this is Alba Fyre’s last warning. Fyre pops up on screen to say she’s more of a visual person, and then lights the words AND NEW on fire.

Apollo Crews has a vision of Grayson Waller with terrified eyes.

Ilja Dragunov runs into Xyon Quinn, who says Dragunov has a lot of hype. Quinn wants a chance to run with the ball but Dragunov doesn’t think he’s that bright. A match seems likely for later tonight.

Stacks is here with D’Angelo. Feeling out process to start with D’Angelo getting the better of things. Lee knocks him to the floor though, where Stacks says give him some time to cut off Lee’s dive. That earns Stacks a dive instead so he gets inside, where the referee ejects him as we take a break. Back with D’Angelo grinding away on a chinlock but Lee fights up and sends him into the corner…..and D’Angelo is hurt. The referee calls the match at 8:42 with Lee winning via stoppage.

It isn’t clear what happened to D’Angelo but commentary thinks it is a knee injury.

Carmelo Hayes and Trick Williams don’t care about Wes Lee but here is Oro Mensah to interrupt. Hayes thinks they can do good things for Mensah but at Halloween Havoc, it is every man for themselves. Works for Mensah.

And now, a day in the life of Pretty Deadly. They wake up at 10am and have breakfast in bed, then choose their wardrobe at 11am. Then at 2pm it’s time to spend an hour working on their hair. After some tea, they go to the gym (wearing their titles of course) where they keep working out. Then they sleep next to each other.

Ruca is a surfer. Miller takes her down by the arm to start but Ruca is back up with a headscissors. A sunset flip gives Ruca one and a dropkick gets two as the fans aren’t exactly thrilled here. Miller takes her back down and grabs a cross arm choke but Ruca is back up. A knockdown out of the corner sets up a flipping legdrop to the back to give Ruca the pin at 3:44.

The Dyad is here with Gacy. Grimes kicks away at the ribs to start so Gacy heads outside, where he rams Grimes into the apron. That’s enough for Grimes, who fights up and hits a flip dive to take the Dyad down. Back in and Gacy grabs a swinging Rock Bottom for two on Grimes but he slips out of a second one. The superkick drops Gacy but the Dyad offers another distraction. That’s enough for Gacy to hit the handspring lariat for the pin at 3:15.

Grayson Waller is frustrated with Apollo Crews.  As a result of Crews’ vision, Waller is going to have extra security for his talk show next week because that isn’t going to happen.

Zoey Stark and Katana Chance are here too. Feeling out process to start with Carter taking her down and shaking a bit. Back up and Lyons knocks her into the corner, setting up the running headscissors out of the corner. Something like a Michinoku Driver gives Lyons two but Carter knocks her down. The running kick to the face in the ropes gets two on Lyons but she is right back with a spinning kick to the head. The splits splash finishes for Lyons at 4:14.

We look back at Chase U beating Carmelo Hayes/Trick Williams last week.

This week at a pep rally, Chase told his students that he has a North American Title qualifying match next week against Von Wagner. He’s ready to move on to win the title and opens the floor for questions. Someone named Dave asks why we should believe that Chase can beat Wagner. Chase: “YOU THINK THAT’S A FIVE STAR QUESTION???” Chase promises to win.

Nathan Frazer talks about being tied up with Axiom and compares it to his soccer career.

They fight over a headlock to start with Dragunov getting the better of things with a headlock takeover. The abdominal stretch goes on but Quinn slips out and sends him into the corner for a running shot to the face. There’s a backbreaker to Dragunov and a splash gets two. Dragunov hits a jumping enziguri and muscles him over with a suplex, setting up a hard right hand on the mat. The Torpedo finishes Quinn at 4:54.

Wendy Choo doesn’t like Lash Legend’s voice and won’t apologize for standing up for herself. Legend doesn’t like her either so next week they’ll try to shut each other up.

Brutus starts the brawl in the aisle and they head inside for the opening bell. They fight over some grappling to start with Kemp grabbing a cravate. Creed fights up and gets two off a cradle, which is enough for Kemp to grab a chair and unload for the DQ at 3:03.

Result: Brutus Creed b. Damon Kemp via DQ when Kemp used a chair (3:03)

Quincy Elliott gives Sanga a pep talk in the back, which Sanga appreciates. With Sanga gone, Xyon Quinn comes in but Elliott doesn’t see the X Factor in him. Then Quincy leaves.

Zoey Stark and Nikkita Lyons are ready to win the Women’s Tag Team Titles but Toxic Attraction comes in to laugh at them. A fight is teased and here is Alba Fyre to even things up (and start a fire). Toxic Attraction bails.

Pub Rules match, meaning street fight, with Joe Coffey banned from ringside. It’s a brawl to start with a fight on the floor and another inside. Gallus feels the need to bring out a table as I feel the need to praise Jensen’s Badstreet USA shirt. Jensen grabs his own table but instead it’s time for s a bunch of chair shots to drop Gallus as we take a break. Back with Gallus in control and a bunch of weapons in the ring.

Some belts are brought out to whip Jensen and Briggs, with a few fans being rather terrified. Jensen and Briggs fight up and get in their own whipping but since it’s pub rules, some glasses are broken over Gallus as well. Mark is put upside down in a trashcan so here is Joe Coffey, who gets booted off the apron and through a table. Wolfgang goes through a table as well and it’s a High/Low to Mark (still in the trashcan) for the win at 11:34.

Gallus is held back by security and punches a referee. Cops come in to arrest the trio to end the show. 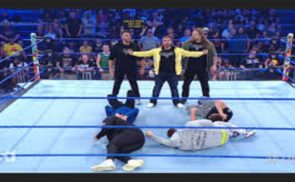