It’s time for one of those huge matches that you actually get around here with North American Champion Ricochet facing United Kingdom Champion Pete Dunne in a title for title match. What more could you ask for from a show? Well given that it’s NXT, I have a feeling we’ll get a few other bonuses. Let’s get to it.

The opening talks about the title (Titles?) match and treat it as a major deal.

Fallout from an argument last week. Evans and Purrazzo start things off with Purrazzo taking her down off a headlock. Evans manages to slip out but Purrazzo pops to her feet with ease and offers a little bow. It’s off to Aliyah for some kicks to the ribs as Purrazzo gets taken into the corner. The villains stay on the ribs but Purrazzo spins out of a tilt-a-whirl backbreaker into a failed Fujiwara armbar attempt.

Aliyah forearms Purrazzo into the corner and screams a lot. Evans adds a slingshot Bronco Buster as the dominance continues. A kick to the arm knocks Purrazzo away from the hot tag attempt but Kai comes in to break up a cover anyway. Instead Aliyah goes with an armbar until Purrazzo kicks her away and makes the hot tag to Kai. That means kicking abounds but a blind tag brings in Evans for the Woman’s Right to knock Kai cold for the pin at 7:36.

The Street Profits are ready to get back at the Mighty.

We look back at the end of last week’s Nikki Cross vs. Bianca Belair match with Cross attacking her after the match.

Belair seemed shaken up by the loss but reminds herself that she’s undefeated.

Ryker throws him into the corner to start and stomps away. The chinlock goes on early and doesn’t last long, allowing Ryker to ax handle him out of the air. A slingshot powerbomb finishes Carrillo at 2:14.

Candice LeRae offers William Regal her version of what happened the night Black was attacked. She thinks it sounds like Tommaso Ciampa though. Ciampa has been cleared, so Regal asks about Gargano being the attacker. LeRae says Gargano had asked her to wait while he got cleaned up and they left together. Regal doesn’t seem convinced but lets her go for now.

We recap Ricochet vs. Dunne. They both wanted the other’s title and then Ricochet accidentally ran over Dunne in a tag match. The match was set.

Video on Keith Lee. He talks about being limitless, which is both physical and mental. Because of that, his future in NXT is limitless as well. Bask in his glory.

Clip of EC3 accusing Lars Sullivan of attacking Black and being destroyed for his efforts.

Both titles are on the line and the fans are split. Ricochet’s armdrag just earns him a headscissors counter and we’re at an early standoff. An exchange of wristlocks has Ricochet in trouble as the fans start to get more behind Dunne. It’s time to start cranking on the wrist as is Dunne’s custom but Ricochet reverses into something like a standing Crossface. A leglock keeps Dunne in trouble and it’s off to an exchange of leg cranking on the mat.

Ricochet manages to get the shoulders down, only to have Dunne reverse into what appears to be Jamie Noble’s old Trailer Hitch (a modified Indian deathlock). A surfboard keeps Ricochet in trouble until he bends back into a cover for two. More mat grappling goes to Ricochet with Ricochet working on the arm and shoulder. Dunne has had enough of that and forearms the heck out of Ricochet, who goes right into the flipping to set up a dropkick.

That means a suicide dive to the floor as Ricochet is much more comfortable with the accelerated pace. Back in and Dunne goes for the leg, but uses it as a diversion to kick him in the hand again. Dunne stays on the arm as he continues to break Ricochet down. The wrist and fingers are bent horribly (Mauro: “Pete Dunne must have something against piano players.”) and Ricochet is in trouble in the corner.

The jumping stomp to the arm misses though and it’s a rolling clothesline to drop Dunne. A 619 in the corner sets up a springboard elbow to the jaw for two as the pace picks up again. Dunne is fine with that as well and moonsaults over him in the corner but Ricochet flips out of the X Plex. A running shooting star to the back gives Ricochet two and the fans are rather impressed.

Another flip is reversed into a cross armbreaker though and Dunne works the hand over even more. Ricochet’s knees are fine enough to smash into Dunne’s face but Dunne forearms him out of the air. The X Plex connects for two and they’re both down. Dunne gets kicked to the floor though and Ricochet tries a step up moonsault, only to get caught in an X Plex onto the apron.

Back in and the Bitter End is reversed into a reverse hurricanrana for two and Ricochet can’t believe the kickout. They trade kicks to the head until Dunne turns him inside out with a clothesline. The Bitter End is reversed again and a handspring into a tornado DDT gives Ricochet a crazy close two. Both guys go to the top and Dunne works on the arm again, only to get pulled down with a super hurricanrana.

The lifting Downward Spiral gives Ricochet two and that’s a standing ovation. Ricochet’s springboard is pulled into a triangle choke but that’s reversed into a powerbomb. Dunne holds the hand though and slaps on a wristlock with a bodyscissors but THAT gets reversed into a dead lift brainbuster to put them both down again. They slowly slug it out…and the Undisputed Era comes in for the double DQ at 21:46.

Result: Ricochet vs. Pete Dunne went to a double DQ when the Undisputed Era interfered (21:46)

The War Raiders hit the ring to make the save and the champions give a respectful stare to end the show. 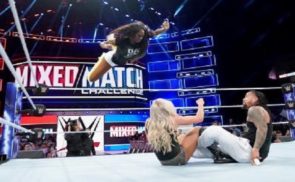 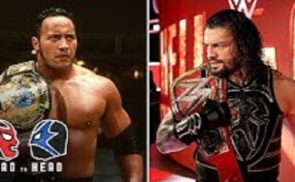