This is kind of the show before the big show with next week having the showdown between Sami Zayn and Bo Dallas. As for tonight there isn’t anything big announced. We do however have a major guest star in the form of Rob Van Dam. I love how they bring in big names like that to give the fans a treat almost every week. Let’s get to it.

This should be good. It’s a result from the Bo Dallas Invitational where both guys fought over a chance at fighting Dallas. Cesaro charges at the bell and hits a running dropkick to fire up the crowd. Kruger loses his shirt but comes back with some loud chops. A clothesline puts Cesaro on the floor and Kruger rakes his back.

We head back inside with Cesaro driving in knees to the ribs to take over, drawing a “Push Cesaro” chant. Kruger gets choked on the bottom rope but comes back with a quick suplex and some choking of his own. A Russian legsweep gets two for Leo but Antonio hits a quick running European uppercut in the corner for two of his own.

Cesaro puts him down with something like a Rock Bottom for two but gets crotched on the top rope. A superplex puts Cesaro down and we take a break. Back with Cesaro being knocked to the floor for a suicide dive from Kruger. They head inside again with Cesaro running away from the Slice clothesline and heading outside again. Cesaro sends him into the steps and drops him back first onto the apron in a bid for a countout. Kruger gets back up so Cesaro gives him a gutwrench suplex on the ramp.

Kruger still makes it back in at nine so Cesaro goes into boxing mode to punch him down again. A fast series of European uppercuts and a second cousin of the Angle Slam gets two but Kruger backdrops out of the Neutralizer. Kruger gets a boot up in the corner but charges into Swiss Death for another near fall. There’s the standing sleeper but Cesaro pulls him down into a bodyscissors. Kruger fights up again but gets his head taken off by a clothesline. Cesaro goes into beast mode and this the Neutralizer for the pin at 14:47.

Post match Cesaro drops a top rope knee on Kruger because that’s the kind of guy he is. Kruger seems to have an injured throat.

Bayley is with Charlotte here and Renee Young is on commentary again. Santana fights out of a wristlock to start but Charlotte uses her gymnastic stuff to take over again. A bad looking kick to the face gets two for Santana as Renee talks about an article on WWE.com with Charlotte complaining about being compared to her dad.

Here are Sasha Banks and Summer Rae for some Laycool style applause. Charlotte fights out of a headscissors into a cradle for two before bridging Santana down for two. Sasha’s distraction gives Santana a rollup of her own for the same result but she walks into a reverse F5, setting up a HORRIBLE looking flip Diamond Cutter for the pin at 3:10.

Post match Summer and Sasha declare themselves the B.F.F.’s: the Beautiful Fierce Females. They’ve gotten rid of Paige so there’s no one left to do anything about them. Cue Paige but she gets beaten down as well, leading to a save by Emma.

Mojo Rawley wants to motivate you.

Post break Summer and Emma challenge Paige and Emma to a tag match next week.

Rawley’s entrance music starts with “I don’t get hyped. I STAY HYPED!” He sprints around the ring with so much energy that Ultimate Warrior would tell him to tone it down. Burch pounds away on the well built Rawley before putting on a quick chinlock. Mojo fights up and hits a few quick shoulder blocks before finishing Burch with an Earthquake splash for the pin at 2:27. Not a great debut but the entrance told you everything you need to know about Rawley.

Paige and Emma don’t like each other but they agree to team up next week.

Dawson and Rusev might be named the Legionaries. Enzo thinks we’re in Cheers right now because everyone knows their names, causing Cassady to sing part of the cheers song. Rusev and Dawson are definitely S-A-W-F-T and the fans let them know it. Cassady and Amore are just so much fun. Rusev starts with Big Cass and pops him in the jaw with an elbow to slow him down.

Off to Amore who has about as much success as you would expect. A series of knees to the ribs put Amore down and it’s off to Dawson for some elbow drops for two. There’s a hard clothesline for the same and everything breaks down. Rusev crushes Enzo in the corner and finishes him at 2:52 with a camel clutch, which is called the Accolade for some reason.

Sami Zayn is ready for his title shot next week against Bo Dallas. Bo comes in and says that Sami hurt his feeling last week and that’s it’s certainly not personal. Sami has no problem with Bo other than he’s the NXT Champion. Bo offers a tag team instead of fighting over the NXT Title, which Sami agrees to, after the title match that is. “Un-Bo-lievable.”

English, now an Artiste, sings about kicking someone’s teeth in because he’s a sports entertainer. Ricardo does RVD’s entrance but not in song. Aiden takes Rob down with a top wristlock to start but we hit a quick standoff. A quick rollup gets two on English and sends him back into the corner for some finger pointing. The monkey flip out of the corner has English in trouble and a clothesline puts him on the floor.

Rob moonsaults him off the apron and we head back inside for Rolling Thunder but Aiden bails before Rob can start. English kicks the rope to crotch Rob and shouts that it’s his show. A suplex gets two on Rob and we hit the chinlock. Back up and Rob kicks him down a few times before a superkick sets up Rolling Thunder. The Five Star ends English at 5:32.

Remember to follow me on Twitter @kbreviews, check out my website at kbwrestlingreviews.com  and pick up my new book of Complete Monday Nitro Reviews Volume I at Amazon for just $4 at: 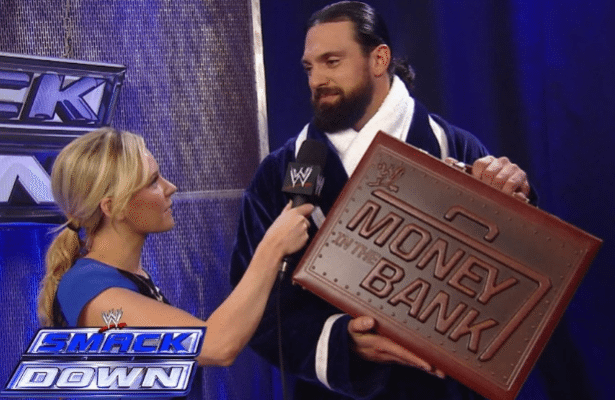 Possible Use of Hulk Hogan at WrestleMania 30