We’re officially on the road to In Your House and that means more of Joe Gacy vs. Bron Breakker because of course it does. Other than that we have more of the women’s Breakout Tournament, which at least started out somewhat ok. Tonight we have more first round matches so let’s get to it.

Before the match, Hayes and Williams promise to take the North American Title back at In Your House. Grimes kicks Hayes in the face to start and Sikoa drops a backsplash on Williams to start fast. Williams is back with a jumping clothesline on Grimes and Hayes adds a springboard crossbody. It’s a double tag to bring in Williams and Sikoa with Sikoa getting taken down as we take a break.

Back with Hayes holding Sikoa in a chinlock, which is broken up without much trouble. The tag brings Grimes back in to clean house, including the double hurricanrana. There’s a high crossbody to Hayes but Sikoa tags himself in to break up the Cave In. Sikoa drops Hayes and the Cave In hits Williams, setting up the Superfly Splash to finish Hayes at 9:59.

Post match Sikoa hands Grimes the North American Title, albeit with quite the stare.

Video on Thea Hail training at the Performance Center. Oh but first she needs to graduate high school.

Legend powers her into the corner to start but gets caught in a headscissors. That’s escaped with a nip up and Paxley can’t get an electric chair. Paxley’s leg is messed up so Legend wraps it around the bottom rope to make it worse. A stretch muffler goes on but Paxley pulls herself up and manages a rollup for two. The electric chair still doesn’t work so she grabs a suplex, only to hurt her knee again. A standing spinning moonsault gives Paxley two but she STILL can’t get the electric chair. That lets Legend hit the pump kick for the pin at 3:54.

NXT is returning to live touring in Florida this summer.

Duke Hudson is talking about how he took some time off…and Bron Breakker walks by, saying to play his music.

Here is Breakker in the ring for a chat. Breakker talks about how Joe Gacy left him in a field and now wants him to join Gacy’s cause. That earns Gacy an offer of kissing a certain part of Breakker, but here is Gacy to interrupt. Breakker says he doesn’t trust him but Gacy says the people want Gacy vs. Breakker, one on one. That’s fine with Breakker, who says the match is on but Gacy wants to raise the stakes. It should be Breakker destroying Gacy and hurting him every way he can. That gives Gacy an idea: if Breakker gets disqualified, he loses the title. Deal.

Indi Hartwell is tired of feeling sorry for herself so she wants to face Mandy Rose.

Wes Lee says Xyon Quin isn’t medically cleared but Lee is waiting on him. Nathan Frazer comes in for a challenge for tonight. Lee says there is a lot of pent up aggression so he doesn’t want to hurt Frazer. The match seems to be on.

Roderick Strong and Damon Kemp are here with the Creeds. The Creeds start fast and knock the Vikings outside early on. We settle down to Erik running Julius down and the Raiders be clubberin. The armbar goes on, followed by a clothesline and the front facelock. Julius fights up and brings Brutus in to clean house, including a dropkick to knock Ivar off the top. Brutus hits a top rope cannonball to the floor (and lands hard on his feet) as we take a break.

Back with Brutus getting two on Erik and taking him into the corner to keep up the beating. Erik breaks that up and dives over to Ivar to make the tag, meaning house can be cleaned. Everything breaks down and a spinebuster gets two on Erik. Brutus is sent outside and it’s back to Ivar, setting up a middle rope World’s Strongest Slam for two, with Brutus making the save.

A German suplex drops Erik and Julius runs the top, only to have a superplex attempt broken up. Ivar misses the top rope splash, allowing Brutus to grab an Oklahoma roll for two as Erik makes a save of his own. Everyone slugs it out so Kemp gets in the apron, allowing Strong to offer some interference. Julius breaks that up, only to have the Raiders double powerbomb Julius for the pin at 13:01.

Post match, the Diamond Mine seems ready to split.

Legado del Fantasma is ready for Tony D’Angelo and company.

Bron Breakker is ready for Joe Gacy but Duke Hudson interrupts. A match is set for later tonight.

Bodhi Hayward is here with Chase. Waller pounds away to start but Chase is back with a neckbreaker. That earns him a big boot though and Waller gets in some right hands. This does not sit well with Sarray, the honorary Chase U flag bearer, and neither does a suplex from Waller. A side kick gives Waller two but Chase catapults him into the corner. The spelling stomps set up a backdrop but Waller lands on Hayward by mistake. The distraction lets Waller hit the rolling Stunner for the pin at 4:14.

Toxic Attraction doesn’t think much of Kayden Carter/Katana Chance/Indi Hartwell have been talking about them. Revenge is promised.

The Diamond Mine argues in the back with the Creed Brothers walking away. Roderick Strong tells Damon Kemp to deal with this. With Kemp gone, Pretty Deadly comes in to say the Creeds aren’t winning no matter what.

James takes her down to start and goes after the arm but Perez grabs some armdrags. A backbreaker puts Perez in trouble but she reverses a Boston crab into a rollup for two. Another spinning backbreaker drops Perez again as she can’t get any kind of momentum. Perez finally manages a headscissors for a breather and a Russian legsweep gets two. James hits a side slam but misses a charge into the corner, allowing Perez to hit Pop Roxx for the pin at 5:11.

Malik Blade and Edris Enofe mock the Tony D’Angelo vs. Santos Escobar war. D’Angelo’s goons come in and the match is set for next week.

Cora Jade congratulates Roxanne Perez on her win but Elektra Lopez comes in to promise to beat Alba Fyre next week. Jade and Perez aren’t impressed.

Feeling out process to start and they go to a rather early standoff. Frazer misses the threat of a superkick and gets sent to the apron, with Lee knocking him to the floor. They switch places again and it’s Frazer hitting a heck of a suicide dive. Back in and Lee grabs a German suplex for two but Frazer catches him on top. A superplex attempt is countered into a crossbody for two and they’re both down again. They hit stereo crossbodies for a double knockdown and they need a breather. Not that it matters as Von Wagner runs in to kick Frazer in the face for the DQ at 4:22.

Post match Wagner beats up Lee as well, setting up a big gorilla press toss onto the announcers’ table.

Wes Lee and Nathan Frazer run into Sanga, who says they did well for men their size. Lee takes that personally but Frazer isn’t getting involved. Sanga doesn’t want to get involved in this but a match is set for next week.

Feeling out process to start with D’Angelo running him over and stomping away. Escobar fights back but his dive is cut off, allowing D’Angelo to do more mob stereotypes as we take an early break. Back with Escobar hitting a kick to the face to put D’Angelo on the floor, setting up a heck of a suicide dive.

A dropkick takes D’Angelo down and another puts him on the apron as well. D’Angelo grabs a belly to belly into the corner and they both go up top, where Escobar snaps off a super hurricanrana. The fans chanting knocks the sound out and here is the rest of Legado for a distraction. D’Angelo’s goons come in to take care of them, but Escobar uses the distraction to knock D’Angelo cold for the pin at 12:42.

Joe Gacy, with his minions, talks about how Bron Breakker’s lack of control will cost him the NXT Title, allowing Gacy to control the brand and the world. Maniacal laughter, apparently from on top of a rather high building, ends the show. 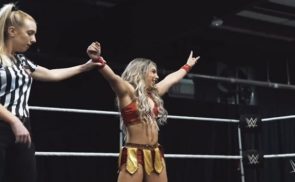