We’re back to a little more normal this time around with NXT having regular matches instead of a mini documentary show like last week. Since there was no Takeover: Tampa Bay, those matches and stories will have to be addressed and HHH will be here tonight to start that process. Let’s get to it.

The opening recap looks at Tommaso Ciampa and Johnny Gargano getting in their huge brawl last week.

Tom Phillips confirms that matches originally scheduled for Takeover will be taking place on NXT TV instead.

Theory has his own phone with him to mock Breeze. The lockup goes nowhere so Theory talks trash, saying he’s the future and Breeze is the past. Back up and Breeze hits a dropkick, allowing him to chill on the top rope for a bit. The Supermodel Kick has Theory distracted so Breeze hits a clothesline instead. Theory is right back with a running Blockbuster though and the pace slows down a bit. The reverse chinlock keeps Breeze down and Theory keeps talking trash about how great he is. A rolling dropkick puts Breeze on the floor and we take a break.

Back with Theory hitting a spinning torture rack bomb for two, meaning Breeze needs to roll outside again. Theory throws him through the barricade (Theory: “LET’S TAKE A PICTURE TYLER!”) and hits a Buckle Bomb back inside. Breeze hits a quick Supermodel Kick for two and Theory slows down a bit. He’s fine enough to go up top and hit a shot to the back of the neck for two. A bunch of stomping has Breeze down but Theory goes to get his phone and film himself talking trash. That lets Breeze come back with the Beauty Shot for the pin at 13:25.

Post match Breeze grabs Theory’s phone for his own selfie.

Miles gets an entrance. Some early shots have little effect on Dain and it’s a pump kick to put Miles on the floor. Back in and Dain knees him in the chest as the beating is on. The neck crank goes on for a bit but Dain misses a charge into the post. Dain forearms him in the head though and hits the backsplash. The Vader Bomb finishes Miles at 3:43.

Grimes doesn’t think much of the bicep pose and they lock up in a hurry. Nese takes him down with an armbar, followed by an armdrag into another armbar. A clothesline puts Nese down for two but Nese blocks a powerbomb. Grimes walks into a spinwheel kick and the Lionsault gets two. The sunset driver is countered though and a Superman forearm rocks Nese. He’s fine enough to hit a superkick into the corner though, only to get forearmed again. The Cave In finishes Nese at 5:38.

We look at Aliyah having her nose broken by Xia Li four months ago.

Hold on though as Li has been attacked. We need a replacement.

Shirai dropkicks her in the corner to start and shrugs off Aliyah’s right hands. A butterfly backbreaker sets up the perfect moonsault to give Shirai the pin at 1:22.

Here’s Keith Lee for a chat. Two weeks ago he powerbombed Dominick Dijakovic but now he knows it was Damian Priest who attacked him. Therefore, he owes Dijakovic an apology so here’s Dijakovic in person. He doesn’t want an apology though because all he cares about is the North American Title.

Lee took the food off of Dijakovic’s family’s plate, but here’s Priest to interrupt. He wants the title because it will give him more women, money and legacy, but first he needs to win the title. Lee says the champ is right here so Priest busts out his baton, meaning the three way fight is on. Priest and Lee fight outside so Dijakovic hits a big flip dive to take both of them out and stand tall.

Adam Cole is by the pool and talks about being the longest reigning NXT Champion in history. He’s been thinking about his altercation with the Velveteen Dream and it shook him up a bit. However, he isn’t the only member of the Undisputed Era who wants some of that experience. Therefore, next week, it’s going to be Dream vs. Bobby Fish.

Vink shoves Burch around to start and powers him into the corner for the tag off to Thorne. That means it’s time to start in on the arm so Burch fights up without much trouble and hands it off to Lorcan. It’s already back to Vink for a Rock Bottom out of the corner to plant Lorcan for two more. Burch gets over for the hot tag a few seconds later though as everything breaks down. A dropkick puts Vink down and the Crossface goes on, followed by Lorcan’s half crab on Thorne for the double tap at 3:44.

LeRae headlocks her down to start and grabs a rollup for two. They trade stereo missed dropkicks for a standoff and seem to wait around for applause that isn’t coming. Carter takes over with a whip into the corner and clotheslines her down a few times. A running knee to the face gives Carter two more but she has to roll out of the Gargano Escape attempt. LeRae misses a Lionsault but slips out of a rollup and grabs the Gargano Escape for the tap at 4:29.

There are no seconds here and Riddle does fist bumps with the non-existent fans. They go to the mat to start with neither of them being able to get the better of it. That’s the same result when they try it again so they do it a third time with Strong grabbing a front facelock. Riddle shoves him away to the ropes so Strong tries striking away. Strong drops him ribs across the top rope and we take a break.

Back with Riddle fighting out of a camel clutch and kicking away to put Strong in the corner. A t-bone suplex looks to set up a running kick to the chest but Strong reverses it into the Strong Hold. That doesn’t last long either so it’s the Bro To Sleep for two on Strong instead. The Bro Derek is broken up as well so Strong hits an Angle Slam for two. Strong hits the running forearms against the ropes, only to try one too many and get caught in the Bro Derek for the pin at 10:53.

Post match two big guys come out and beat Riddle up, despite his best efforts to fight back. Cue the debuting Malcolm Bivens (formerly Stokely Hathaway) to say it’s a shame that Pete Dunne isn’t here because this is the future of the tag team division. No names are given.

Here’s HHH to address the Tommaso Ciampa vs. Johnny Gargano war. Before he can get that far though, here’s Ciampa to interrupt. He knows it’s time to end this with Gargano and wants him out here now. HHH says there can be no physicality between the two of them tonight and tells Gargano to get out here as well. Gargano comes out and stands on the stage because he knows Ciampa will start something. Why was Gargano fined for wrecking the Performance Center when Ciampa started things in the first place?

HHH doesn’t want to hear it and tells Gargano to get in the ring. He understands what the two of them are doing because he and Shawn Michaels did it as well. This has to end and it should end on the biggest stage in the world. Gargano says it was supposed to end last year but Ciampa broke his neck. It’s a shame Gargano didn’t get to break Ciampa’s neck for him. Gargano knows this has to end and says they can do it anywhere. Put a ring in an empty building and give them a referee so they can finish it.

HHH says that works for him and we’ll do it in two weeks. After that, it’s done and neither can touch each other after or they’re gone. Gargano promises to prove that he’s the better man and wrestler….and those videos about death pop up on the screen. This time, a voice is included speaking something other than English, with Killer Kross’ face appearing a few times. A clock hits midnight to end the show. 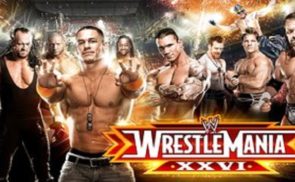