It’s still tournament time around here as the women’s Dusty Classic continues the first round but the men’s version heads on to the quarterfinals. I’m still not sure if this is the best idea in the world as these tournaments are dominating the show, but maybe the action is going to be enough to carry the show. Let’s get to it.

Maverick and Lee start things off and go to the mat in a hurry. Maverick’s headlock is driven against the ropes so Lee says bring it. Dain wants in but Maverick isn’t ready yet, instead taking Lee to the mat with a front facelock. That’s broken up as well as Maverick is taken into the corner for a running Bronco Buster from Carter. Maverick slips away and brings in Dain to clean house, including throwing Maverick at Nash for a knockdown.

The running big boot in the corner rocks Carter but a shot to the knee put Dain down for a second. Lee comes back in and is tossed outside with ease to send us to a break. Back with Dain hitting Lee in the face again and crushing him with a backsplash. That’s enough to give Maverick two but the chinlock is countered for the hot tag to Carter. A penalty kick rocks Maverick and a dropkick puts Dain on the floor. The push moonsault connects for two with Dain making a save. Dain is sent outside again though and it’s a Hart Attack with a Blockbuster instead of a clothesline to finish Maverick at 11:06.

Danny Burch and Oney Lorcan are fired up for tonight.

Raquel Gonzalez/Dakota Kai and Jessi Kamea/Aliyah are ready to win the Dusty Classic.

Curt Stallion looks out the window and sees shooting stars. One day he followed it and knew what he was ready to do. Now he wants to have a rocket strapped to his back in the form of the Cruiserweight Title.

Kamea and Aliyah have Robert Stone in their corner. Gonzalez and Aliyah start things off with Aliyah not being able to shove her around. Instead Gonzalez swings her around in a lockup so it’s off to Kamea, who has to avoid an elbow. A dropkick sends Gonzalez into the corner for a running forearm but she sends Kamea into Kai’s elbow. Aliyah comes in for some double teaming and a running flipping hair faceplant puts Kai down.

Kai is sent outside but manages to pump kick Aliyah down hard and gets two back inside. Back in and Gonzalez hits a swinging powerslam on Aliyah, setting up Kai’s running kick to the face in the corner. Kai gets two off a double stomp but Aliyah manages a clothesline to bring in Kamea. That’s fine with Gonzalez, who plants her with the chokeslam for the pin at 5:58.

The Way is sure they’ll win the Women’s Dusty Classic but Johnny Gargano isn’t going to answer anything about Kushida. Austin Theory says it’s kind of like the curse but Gargano orders him to say no more words. Kushida does not get a title shot.

Scarlett uses Tarot cards to display that destruction is coming.

Tegan Nox has been training with Brie Larson. Video tomorrow.

Malcolm Bivens is at ringside and he has an inset promo, promising that Rust will win. Rust takes him down with ease to start and then nails a hard right hand. A stomp onto the head keeps Rios down and it’s time to crank on the arm. Some chops rock Rust and a backside gives Rios two. What looks to be a tornado DDT winds up as a guillotine choke but Rust powers out. A big boot into a flipping neckbreaker sets up a modified Rings of Saturn to make Rios tap at 3:23.

The Grizzled Young Veterans and Kushida/Leon Ruff are ready to win the Dusty Classic.

Finn Balor and Kyle O’Reilly are ready, don’t trust each other, and will see each other out there.

Before the match, Zack Gibson promises to win because Ruff and Kushida have been a team for about five minutes. Kushida takes Gibson to the mat without much trouble but Drake comes in for a spinning kick to the face. It’s off to Ruff for a dropkick but Kushida is already back in for stereo basement dropkicks and two on Drake. We hit the quickly broken armbar and Ruff snaps off a top rope hurricanrana to put Drake down again. Drake forearms his way to freedom but Kushida saves Ruff from a double suplex. A middle rope cutter gets two on Gibson and we take a break.

Back with Ruff grabbing a sunset flip for two on Drake, who pops back up with a heck of a clothesline. Ruff is sent outside for a slingshot forearm/backbreaker combination to put him in even more trouble. A neckbreaker gets Ruff out of trouble back inside and the hot tag brings in Kushida to start cleaning house. The cartwheel into the basement dropkick rocks Drake again and there’s a running dropkick in the corner. Gibson comes back in and escapes an Octopus, setting up a Doomsday Device of all things for two on Kushida.

The double handspring elbow drops the Veterans though and the hot tag brings in Ruff for the second house cleaning. A suicide dive hits Drake and a top rope flip dive hits Gibson. Back in and a running clothesline puts Gibson down again but Ruff misses the Swanton. Drake gets caught not paying attention on the apron and it’s the Ticket to Mayhem to finish Ruff at 13:15.

Post match here’s the Way to beat down Kushida and Ruff. Johnny Gargano insists that Kushida will never get a shot but here’s Dexter Lumis to scare them off.

Curt Stallion has been attacked by Legado del Fantasma.

Legado del Fantasma doesn’t know what’s going on but William Regal comes in and says the title match is on for next week, with promises of consequences if anything else happens to Stallion. Regal leaves and the trio is freaked out by a playing card, though they insist there is nothing to worry about.

Here’s Toni Storm to say she wins whatever she wants. She wanted to be the first ever person to win the Women’s Dusty Cup but Io Shirai took that away from her. Now she wants to hurt and ruin Shirai, but more than anything else, she wants to be the NXT Women’s Champion.

Cue Io Shirai to say she’ll fight Toni anytime because she doesn’t like her. The fight is on with Storm being sent outside but here’s Mercedes Martinez to jump Shirai from behind. Martinez holds up the title but Storm says it’s hers. Shirai is back in to jump them both but Storm pulls her off the top. A pair of hip attacks in the corner leave Shirai laying and Storm rubs the title.

Isaiah Scott doesn’t like being accused of messing with Bronson Reed and suggests you could the fingers pointing at you when you point your finger at someone.

Imperium video, which heavily suggests the return of Walter.

Reed throws him outside to start but Scott sticks the landing, only to get sent face first into the apron. A crossbody on the floor crushes Scott and we take a break. Back with Scott working on an armbar and then raking Reed’s face a bit. Reed isn’t having that and runs him over again, setting up a backsplash for two.

Scott gets in another shot to the shoulder but Reed goes to the middle rope anyway. An enziguri connects though and Scott hits a 450 for two. Scott tells him not to get in his business and hits Reed in the face, which seems to be a rather bad move. Reed headbutts him and adds a hard clothesline, setting up the Tsunami for the pin at 9:21.

Scott really does not look pleased.

Tommaso Ciampa talks about how some fights change people and respect can grow. Timothy Thatcher joins him to say pretty much the same thing. Ciampa promises a war with Undisputed Era next week.

Non-title. Balor armdrags Lorcan into an armbar to start and it’s quickly off to O’Reilly vs. Burch. O’Reilly grabs an armbar of his own but Burch goes to the recently injured jaw to break up a tag attempt. Lorcan and Burch get to work on the arm for a change, followed by Burch’s headlock on the mat. That’s reversed into a wristlock, which is enough for O’Reilly to get back over to Balor.

O’Reilly is back in less than five seconds later as Balor and O’Reilly start the rapid fire tags and arm cranking. They stop to glare at each other though and we take a break. Back with Balor getting a tag to clean house in a hurry, including a bunch of stomping on Lorcan. A trip takes Balor down though and Lorcan gets in some stomping of his own.

The chinlock goes on to keep Balor down and a double atomic drop into a Russian legsweep gets two. Lorcan starts yelling at Balor, which rarely seems like a good idea, and is quickly followed by Balor nailing a Pele kick. The Sling Blade is enough for the hot tag to O’Reilly as house is cleaned in a hurry. Burch gets a boot up in the corner and tries a middle rope but dives into a kneebar to give O’Reilly and Balor the win at 11:56.

Post match O’Reilly and Balor seem cool but Pete Dunne pops up. Burch and Lorcan send O’Reilly into the barricade and Dunne breaks Balor’s fingers as the Undisputed Era come to the ring for the save, albeit rather slowly. The big staredown ends the show, though Balor drops to the floor with the Era standing in the ring. 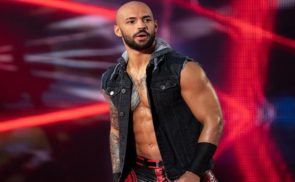