We’re officially in a new era, as Bron Breakker won the NXT Title last week at New Year’s Evil. That is the kind of change you do not see take place very often and now we get to see what happens with Breakker as the star of the show. We should be in for some good stuff, which is long overdue around here. Let’s get to it.

We open with a recap of Bron Breakker winning the NXT Title.

Here is Breakker to get things going. The title looks good around his waist but the fans are split on whether or not he deserves it. Breakker thanks Tommaso Ciampa for being a great champion and a respectable human being. Last week, Ciampa told him it was his time and went over to shake his father’s hand.

We don’t have any days off around here though so if anyone wants some, come get it. Just remember that if you come in to train, he’s already trained. If you’re watching film, he’s already done it, because he’s the freaking NXT Champion. Breakker goes to leave but Santos Escobar comes out for his match, giving us a quick staredown.

Elektra Lopez is going to leave with the winner. Quinn jumps him to start as Lopez is watching from the balcony. Some shoulders in the corner keep Escobar in trouble as this is one sided so far. There’s a toss into the corner to send Escobar flying and we take a break. Back with Lopez at ringside and Escobar working on an ankle lock.

Escobar hits a running dropkick to the knee in the corner, setting up an enziguri. Quinn is right back with another toss, but Legado offers a distraction so Escobar can dump him over the top. A posting is loaded up but Lopez offers a distraction to break it up. Quinn throws Escobar back inside and cuts off a dive with a right hand. That seems to please Lopez….who kicks Quinn low. Back in and the Phantom Driver finishes for Escobar at 10:37.

Tony D’Angelo is ready to break Pete Dunne with the crowbar because tonight, he is in charge.

We look at Grayson Waller interfering in AJ Styles’ match on Raw but getting beaten up anyway.

Mandy Rose is doing a photo shoot by her pool and brags about retaining her Women’s Title. She makes the title hot and wants you to keep staring, which she knows you’ll do.

Kemp is better known as Bobby Steveson. Grimes takes him down for an early two and the armbar comes on. Cue Malcolm Bivens to watch from the stage as Kemp comes back with a belly to belly. The chinlock goes on but Grimes fights up with the clotheslines. A running shot in the corner drops Kemp again and it’s the Cave In for the pin at 2:20.

Joe Gacy and Harland are happy to be involved in the Dusty Classic Play In match. It doesn’t matter what you look like, but Edris Enofe/Malik Blade are going to be in a safe space.

We look back at Von Wagner attacking Andre Chase and some fans last week. Wagner has been fined and suspended.

Gacy drives Enofe into the corner to start and of course gets a clean break. Enofe gets elbowed in the face and it’s a swinging Rock Bottom to give Gacy two. Blade comes in for a dropkick and an armdrag into an armbar. Some double teaming keeps Gacy in trouble but Enofe missed a Stinger Splash, allowing the tag to Harland. Blade is driven face first into the corner and a bunch of rams into the buckle are enough to DQ Harland at 3:15.

Result: Malik Blade/Edris Enofe b. Harland/Joe Gacy via DQ when Harland attacked in the corner (3:15)

Imperium is here to teach integrity, discipline and honor. Americans will not understand that, because Imperium only cares about working harder.

Crowbar on a pole match. D’Angelo goes for the crowbar to start and gets taken down into an armbar for his efforts. A stomp to the head sets up a front facelock and another stomp to D’Angelo’s head. D’Angelo cuts off a climb attempt and snaps off a t-bone suplex. They both go to the corner, where Dunne stomps on his head but can’t get the crowbar down. Instead D’Angelo hits a Falcon Arrow and we take a break.

Back with Dunne hitting a Regal Cutter and stomping on the arm twice in a row. It’s still too early for the crowbar though as D’Angelo hits a flipping German suplex. D’Angelo gets the crowbar and misses some shots, allowing Dunne to get the crowbar and miss some shots. They fight outside with Dunn saving himself from another hand smash. An enziguri rocks D’Angelo but he’s right back with a crowbar swinging neckbreaker.

D’Angelo stomps on the hand, which wakes Dunne up enough to kick him in the head a few times. Dunne flips out of a German suplex and grabs an STF with the crowbar in the mouth. D’Angelo manages to swing it back into Dunne’s face though and it’s time to grab a chair. That’s taken away though and Dunne grabs the fingers. D’Angelo grabs the crowbar though and they forearm it out. Dunne is send into the corner and a crowbar to the face gives D’Angelo the pin at 13:17.

Choo is in pajamas and has a pillow, while Carter and Catanzaro dance through the crowd, joining the also dancing Miller on the stage. The bell rings and Choo is already asleep in the corner. Miller kicks Indi in the ribs and dives onto Pirotta on the floor as Kayden tags herself in. She dives out onto Indi and Kacy adds a corkscrew flip dive. Back in and Carter gets kicked down, allowing the tag to Choo, who snaps off kicks and a belly to belly suplex. There’s a t-bone suplex to drop Miller as everything breaks down. Pirotta hits her sitout TKO on Miller, setting up Pretty Savage to give Hartwell the pin at 3:38. Choo is asleep again.

MSK finds the Dusty Rhodes Tag Team Classic trophy and talk about some teams who could give them trouble. Dakota Kai comes in and says she wants it, and suggests that success divides friendship.

Solo Sikoa is ready for Boa.

Boa kicks away to start but Sikoa is back with some strikes of his own. They head outside with Sikoa getting posted to put Boa in control. Back in and a suplex drops Sikoa to set up a chinlock, with Sikoa bleeding from the mouth. That’s broken up and they fight out to the floor, with Boa being sent into the steps. Boa sends him into the announcers’ table and it’s a double countout at 3:40.

Carmelo Hayes and Trick Williams arrive, telling security to keep the car here because they’ll be right back.

Boa and Sikoa are still brawling in the back, with Sikoa getting fireballed in the face again. Now Boa’s face is magically painted.

Von Wagner’s fine has been paid and his suspension has been lifted.

Here are Trick Williams and Carmelo Hayes for a chat. Williams wants the fans to pay some respect to Hayes because they go together like various things that go well together. They pay a quick tribute to Roderick Strong’s Cruiserweight Title and promise nothing but first downs and touchdowns going forward. Hayes is the walking cheat code and you can call the title whatever you want. As long as it is around his waist, it is the A title. Cue AJ Styles for the main event and we get the quick staredown with Hayes.

Post break, Hayes and Williams go to their car, but Cameron Grimes has the keys. Normally he would have taken the car, but now he would rather take the gold.

AJ drives him into the corner to start before grabbing a headlock. With that broken up, AJ kicks away at the leg before hitting a backbreaker. The big jumping knee connects for two but Waller sends him into the middle buckle. That doesn’t seem to matter as AJ snaps off a dropkick to send Waller outside. The dive is loaded up but Waller trips AJ face first onto the apron. Waller hits a heck of a clothesline and we take a break.

Back with AJ hitting the Phenomenal Blitz to put Waller back in trouble, setting up the seated Phenomenal Forearm. The Styles Clash is broken up so Waller sends him to the floor for the slingshot forearm. Back in and Waller hits a shot to the face, setting up a middle rope elbow for two. Styles grabs the Calf Crusher but Waller is right over to the ropes. A powerbomb and the flipping Stunner give Waller two each but Styles slips out of a superplex attempt. Styles plants him with a brainbuster, setting up the Phenomenal Forearm for the pin at 14:17.

Post match, Styles says Waller is good but not Phenomenal. This isn’t over yet though, and AJ wants to introduce him to one of his friends. Cue LA Knight and the big beatdown is on, with Waller being cleared out. Styles and Knight pose to end the show. 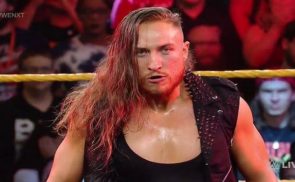