It’s another interesting night as we have the four matches to set up the fatal fourway match to determine a #1 contender to the NXT Title. Other than that though we’re heading down to Australia to see what should be the final match between Shinsuke Nakamura and Samoa Joe for the NXT Title. As a bonus, it’s inside a steel cage. Let’s get to it.

We open with a look back at the Nakamura vs. Joe rivalry with both title changes to set up tonight’s final match.

The cage is lowered and we’re starting in a big way.

From Melbourne, Australia. Nakamura is defending and it’s pinfall/submission/escape. The champ takes him down by the leg and wins an early strike exchange. A knee drop sets up Good Vibrations in the corner but Joe comes back by sending him into the cage. Back from an early break with Nakamura in even more trouble until a spinning kick to the head drops Joe.

Kinshasa is countered with a powerslam and it’s off to a standing Koquina Clutch. Shinsuke flips back to escape and the sliding knee to the head has Joe reeling. It’s too early to escape though and Joe loads up the super MuscleBuster, which is countered into a powerbomb to keep Joe down. Nakamura has the chance to walk out but opts for Kinshasa instead. A second Kinshasa retains the title at 12:56.

We look back at Peyton Royce and Billie Kay walking out on Daria Barenato a few weeks back.

The Aussies laugh at Daria until she comes up to demand a fight with one of them next week.

Still no Sawyer Fulton with Sanity. Young goes right after him to start but gets clotheslined down for his efforts. Left hands in the corner have Eric in even more trouble. The Tyebreaker is loaded up but Nikki Cross comes in for the DQ at 1:20.

Tye fights off Sanity until Damo comes in to lay him out.

Jose grabs a headlock to start before slapping on an airplane spin to take us back in time while still having some fun. The announcers try to get Gravy over as a nickname for Corey as Jose knocks Almas down a few more times. A pop up right hand gets two but Almas kicks him in the face and hits his arm trap DDT for the pin at 3:54.

Before the match Samson sings a song I can’t quite understand. Samson kicks him in the ribs to start as we hear about Strong’s abilities with a backbreaker. It’s already off to the Tree of Woe for some upside down choking followed by a chinlock. Strong comes right back with a running dropkick followed by a fireman’s carry gutbuster. The Sick Kick ends Samson at 3:17.

They trade arm work to start with Roode taking him to the mat and riding Oney a bit, much to the crowd’s delight. Roode stops to pose so Lorcan gives him a running uppercut to the jaw. We get an ONEY chant until Roode knocks him off the top and onto the ropes. Oney gets two off a backslide and starts speeding things up with a running elbow in the corner. A running Blockbuster gets two but the regular version misses and Roode grabs a spinebuster. The inverted DDT sends Roode to the fourway at 7:16.

The fourway is Roode vs. Dillinger vs. Almas vs. Strong. 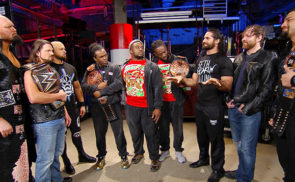 Tribute to the Troops Results: We Want Shield and Bullet Club Back 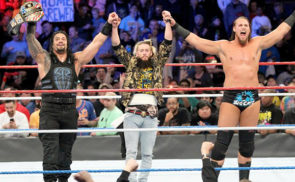