NXT Match Stopped Due To Injury This Week

He’s down for a bit. One of the worst things to see in wrestling is an injury. You never want to see someone put on the shelf for any amount of time but unfortunately there is almost no way to prevent it from happening. Anyone can get hurt at any time and there is very little way to know it is coming. That was the situation this week and a match was stopped as a result.

This week’s NXT featured a match between Tony D’Angelo and Wes Lee. About eight minutes into the match, Lee tripped D’Angelo face first into the middle turnbuckle. D’Angelo could not get back to his feet and the match was stopped as a result. While not confirmed, commentary suggested that D’Angelo had suffered a knee injury of some kind. The match was taped on September 14 and D’Angelo has not wrestled since. There is no word on when he could return to the ring.

What do you think of D’Angelo? What should he do when he returns to NXT? Let us know in the comments below. 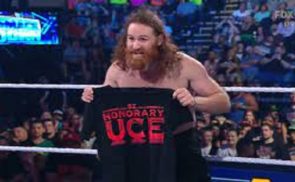