We’re back for another show and while I didn’t like the main event of last week’s show, I do like the fact that we might be seeing some curve balls here and there. That can make all the difference in the world, especially on a show where very little of note ever takes place. Let’s get to it.

Borne drives him into the corner to start but Jiro keeps nipping up. A side slam drops Borne for a change but gets dropkicked out of the air for a quick two. Back up and an overhead belly to belly gives Borne two, followed by some rolled suplex for the same. Borne talks too much trash though and gets caught with a spinwheel kick as the comeback is on. A dragon screw legwhip takes Borne down again and some jacket punches make it worse. The Ikemen Slash finishes for Jiro at 5:10.

Sol Ruca knows she is in for a test against Elektra Lopez but she’s ready to turn Lopez’s world upside down.

Ruca rolls her way out of a wristlock to start but Lopez takes it to the mat with a headlock takeover. Ruca gets creative by walking on her hands to escape but a clothesline cuts her right back down. A neck crank keeps Ruca in trouble until she powers out and hits a running shoulder. Lopez walks into a dropkick but gets her knees up to block a standing moonsault. The Blue Thunder Bomb gives Lopez the pin at 3:53.

Chase U vs. Bronco Nima/Lucien Price

Nima takes Chase into the corner to start but Chase is right back on the arm. Hayward comes in to stay on the arm as we hear about Hayward’s family getting full rides to Chase U. Nima gets in a shot of his own though and the tag brings in Price for even more power. Hayward’s running knee is cut off and there’s a double elbow to drop him again. The chinlock goes on until Hayward suplexes his way to freedom, allowing the tag back to Chase. A high crossbody sets up the spelling stomps and the Fratliner finishes Nima at 6:17.

Result: Chase U b. Bronco Nima/Lucien Price – Fratliner to Nima (6:17) 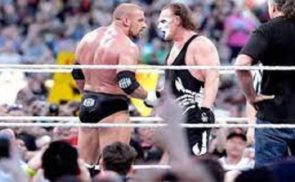