This is how it ends. We’re wrapping up the original run of NXT this week as everything changes with the next show. I’m a mixture of scared, excited and scared excited as the idea of Monday Night NXT scares me to death, but NXT does need some changes. There are a pair of title matches tonight to finish things off. Let’s get to it.

Feeling out process to start with Moon snapping off an armdrag. Back up and Ray hits a quick faceplant for two before taking Moon into the corner. Ray cranks on the arm and pulls Moon down into a cross armbreaker. That’s reversed in a hurry and Moon is back up with a middle rope Codebreaker for two. The Crossface has Ray in more trouble and Moon rolls it into the middle to make it worse. Ray slips out so Moon pulls her into a triangle choke but gets rolled into the corner to break it up.

Back from a break with Moon getting two off a small package and tying her in the Tree of Woe for a kick to the face. A tornado DDT gets Ray out of trouble but Moon sends her outside for the big dive. Back in and Ray breaks up an Eclipse attempt with a hair mare off the top. Moon blocks a kick into something like a flipping One Winged Angel for two more. They fight into a pinfall reversal sequence with Ray trying a backslide but lifting Moon up into a Gory Bomb for the pin at 14:41.

Oney Lorcan and Danny Burch are ready to win the Tag Team Titles. Ridge Holland and Pete Dunne tell them to get rid of MSK too.

We go to Indi Hartwell’s bachelorette party where no one seems to like Dexter Lumis. Hartwell talks about how Dexter saved her but she owes so much to Candice LeRae. Candice gets to give a speech, which involves throwing bread at Kacy Catanzaro and Kayden Carter for being on Tik Tok. She didn’t like Lumis either, but it has worked out well enough.

Escobar has the rest of Legado del Fantasma with him. Feeling out process to start with Hayes working on a wristlock. Escobar starts kicking away and chokes on the rope before kicking Hayes outside. Hayes goes crashing over the barricade and we take a break. Back with Escobar sitting Hayes on top for a loud chop and grabbing a Crossface. With that broken up, Escobar takes him outside for a Boston crab on the steps.

Hayes fights back to escape some choking on the ropes and scores with a quick dropkick to the floor. Escobar is sent face first into the announcers’ table, setting up a running knee back inside. Hayes’ springboard is kneed out of the air but he’s back with a Codebreaker and face plant for two. A DDT onto the apron plants Escobar again but Legado’s distraction lets Elektra Lopez slam Hayes on the floor. That rocks Hayes so much that the Phantom Driver can finish Hayes at 13:51.

Malcolm Bivens officially welcomes the Creed Brothers, both former amateur wrestling stars, into the Diamond Mine. Roderick Strong seems happy to have them.

William Regal announces a fatal four way to crown a new #1 contender next week, as Kyle O’Reilly, LA Knight, Pete Dunne and Tommaso Ciampa fight to get the first shot at Samoa Joe.

Brutus starts for the Creed Brothers and wrestles Viola down with ease. Viola is sent outside and then suplexed back inside. Brutus slaps Julius in the face for the tag and Astall is powered into the corner. Something like a front facelock suplex plants Paxtall and Julius brings in Viola. The Brothers slam them into each other and a basement clothesline finishes Astall at 2:18.

Ember Moon is tired of losing and feeling like this, so she knows what she has to do. Stay tuned.

Hit Row should have seen it coming when Legado del Fantasma jumped them and it’s time to drop them like a $10 pinata. B Fab is ready to take out Elektra Lopez.

Shirai and Stark are defending. Catanzaro headlocks Stark to no avail to start as Stark flips away to escape. It’s off to Shirai, who stops to say something to Stark and gets dropkicked in the face for two. Catanzaro comes back in but gets kicked in the face as we take a break. Back with Shirai rocking Carter again and getting two off a missile dropkick. Shirai grabs the Crossface but Carter fights up and brings in Catanzaro off a blind tag.

After a few shots to Shirai, Carter tags herself back in and gets elbowed in the face. Stark comes in to kick Carter in the face for two but accidentally kicks Shiraid down. A Downward Spiral drops Stark and Carter, after thinking about it for far too long, brings in Catanzaro for an elevated splash. Shirai makes the save so Stark knees Catanzaro in the face, setting up the Moon Over Moonsault to retain at 12:01.

Post match Mandy Rose (now in a face mask), Gigi Dolin and Jayce Jane come out to beat down Carter and Catanzaro.

Kyle O’Reilly doesn’t care anymore because all he wants is the NXT Title.

It’s time for Dexter Lumis’ bachelor party, with Johnny Gargano saying he won’t pay for a dime. Don’t worry though because Cameron Grimes is here to pay for everyone. Everyone, including the zombie referee, gets out of the car and Lumis makes peace with Grimes. First up, go karts, with Indi Hartwell and Candice LeRae spying on them. Then they throw axes, with Lumis indicating he has experience with them and then winning the competition.

Odyssey Jones makes a bet with Grimes about being able to bounce Drake Maverick off a trampoline and wins easily. We wrap it up with lazer tag but Lumis punches one guy out so Gargano can get an easy score. That’s not enough, so Lumis chloroforms another guy and Gargano scores again. Gargano fakes a handshake and wins for his team, though he can’t bring himself to high five Lumis.

The zombie referee says that it’s not that bad, but reveals that he is, in fact, Canadian. Jones shoves their hands together and we get a quick Lumis/Gargano montage. Hartwell and LeRae come in to say everyone is on the same page. Gargano: “Let’s go have a wedding.” Lumis seems to smile a bit.

Robert Stone has gotten Frankie Monet a Women’s Title shot next week to get Money and Jessi Kamea back in his good graces.

Ferry gets in a jawbreaker but walks into a Mandible Claw for the win at 47 seconds.

LA Knight is in his car and talks about how there are three challengers and one superstar. Next week he’s going to take all three of them out and then he’s coming for Samoa Joe.

Tommaso Ciampa says it has been a long time since he had Goldie but the greatest things in life are worth waiting for.

MSK is defending and it’s Burch driving Carter into the corner to start. It’s off to Lorcan but Lee comes in as well to take him down in a hurry. A cheap shot from Burch comes in (and the fans approve) to put MSK back in trouble. Everything breaks down and a running dropkick in the corner drops Burch to the floor as we take a break. Back with Carter caught in a chinlock but fighting up to strike it out with Lorcan. That doesn’t go well for Carter, who is taken into the wrong corner to continue the beating.

Carter fights up and brings in Lee to clean house, including with a German suplex for two on Lorcan. The push moonsault gets the same as everything breaks down. Carter’s Swanton hits raised knees and it’s an ankle lock from Lorcan and a Crossface from Burch. That’s broken up as well and it’s the Blockbuster Hart Attack to retain the titles at 12:16.

Post match MSK leaves so here are Ridge Holland and Pete Dunne to take out Lorcan and Burch, breaking up the group. 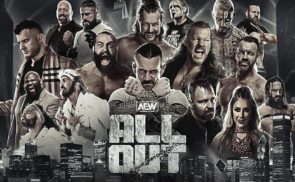 ‘All Out’: In-Person Perspective On AEW’s Biggest Night Of The Year