It’s title night around here with the North American Title being defended in a triple threat as champion Ricochet defends against both Adam Cole and Pete Dunne. That alone should carry the show as far as it needs to go but NXT should have more than enough to make a full night of awesome wrestling. Let’s get to it.

We open with a quick video on the triple threat. This should be great.

Here’s NXT Champion Tommaso Ciampa to get things going. Ciampa says the greatest sports entertainer of all time now has the greatest music of all time. It has brought silence to the sheep, but there is one who always breaks away from the pack. In this case, that would be the Velveteen Dream. Well now the Dream has Ciampa’s attention, but he’s gone about it the wrong way.

Cue the Dream to say this is all amusing, especially the idea of Ciampa being the best of all time. Since we’re on the subject, Dream doesn’t like what Ciampa is suggesting. The people are looking for a true experience, not a guilt trip from an angry little bald man. Ciampa says he may be bald, but he has a shiny title belt. Dream might seem to want the title, but Ciampa thinks it’s all about attention. The title says Dream just isn’t tough enough. Dream says he’s more man than Ciampa can handle, so all he needs is a moment with the title.

Cue Nikki Cross of all people so the fans chant TRIPLE THREAT. Cross gets up next to Ciampa and then grabs at Dream’s jacket. She says she knows what Dream did but listens to the title and knocks the mic out of Ciampa’s hands. Cross drops to her stomach and says she knows what Ciampa did too. Ciampa goes to pick it up but Nikki kicks it away and says I KNOW over and over again. Fans: “SHE KNOWS! SHE KNOWS!”

Reeves yells about being the finest to start and the fans are really not impressed with him. Lee gets taken into the corner where Reeves shoves his face, earning a heck of a chop to the chest. One heck of a toss over the top sends Reeves to the floor as the dominance is beginning. Back in and Reeves kicks him in the face to take over, meaning it’s time for the chinlock. Some right hands to the face just annoy Lee so he runs Reeves over and hits the Supernova for the pin at 3:59.

Video on Shayna Baszler, focusing on her rise to the top of the card and the NXT Title. Brooklyn was a misstep and she celebrated just a bit too early. She should have beaten Sane and she will next time. People not understanding that makes her mad and she’ll prove everyone wrong.

Kairi is so excited and says Shayna’s training isn’t going to matter.

William Regal says he needs answers about Aleister Black’s attacker and needs to talk to Cross. Kassius Ohno comes up and still wants to know when Regal’s new toy gets here. Maybe the guy isn’t the competitor that Regal thinks he is. Maybe he was the one who attacked Black. Regal goes into his office and Cross pops up again, saying she knows what Ohno did.

Video on the War Raiders vs. Undisputed Era for the Tag Team Titles next week.

Ricochet is defending and Dunne’s United Kingdom Title isn’t on the line. Dunne and Ricochet hammer Cole down in the corner to start but the partnership breaks down in all of ten seconds. Dunne gets knocked to the floor so Ricochet can start flipping around, capped off by a dropkick to Cole. Another shot puts Dunne back on the floor but Cole puts Ricochet out there as well.

Back up and Dunne clotheslines Cole to the floor, only to be replaced by Ricochet. They’re certainly moving out there. They fight over a wristlock and get to a standoff and some applause, only to have Cole come back in and get taken down into a surfboard double knee stomp. Ricochet seems impressed and offers a handshake, so Dunne punches him in the face for his efforts. It’s time for Dunne to start in on the fingers and a hard stomp to the arm has the champ in even more trouble.

Ricochet is right back with a cross between a Texas Cloverleaf and a Tequila Sunrise, only to have Cole come back in for the save. Cole sends Ricochet outside and kicks Dunne in the face for two. Dunne is right back up with an enziguri but here’s Ricochet again with a springboard headscissors to send Dunne outside. That means a middle rope moonsault, followed by the springboard European uppercut to Cole. Everyone is back in and it’s Dunne kicking Cole in the head, setting up a half crab to both of them at once.

Since that doesn’t work, Ricochet puts Dunne in a Black Widow, only to have Cole break it up with a Backstabber. The three way slugout is on until Cole kicks Dunne to the floor and knees Ricochet in the face for another near fall. Dunne comes back in and breaks up a near fall off a running shooting star.

Ricochet tries the springboard moonsault, only to get double superkicked out of the air while upside down. That looked awesome. Dunne wins a slugout with Cole and stomps on his fingers so Cole DDTs him onto the apron. Cole superkicks the steps by mistake though and gets his arm crushed in the steps. Ricochet kicks Cole in the face but Dunne superkicks him, setting up the moonsault to the floor.

Back in and the X Plex gets two on Ricochet and it’s both challengers heading up. Ricochet joins in on the fun and hurricanranas them both down at the same time, followed by a botched reverse hurricanrana on Dunne. The jumping Downward Spiral gets two on Dunne but Cole breaks up the 630.

Dunne Bitter Ends Cole so Ricochet comes off the top with a shooting star, right into the triangle choke. A powerbomb doesn’t break the hold so Dunne breaks the fingers. The Last Shot sends Ricochet outside and the suplex neckbreaker gets two on Dunne. The Bitter End plants Cole again but this time it’s Ricochet springboarding in with a 450 to pin Dunne and retain at 18:31. 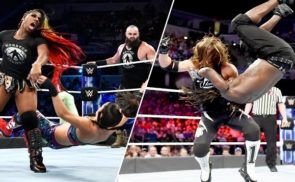 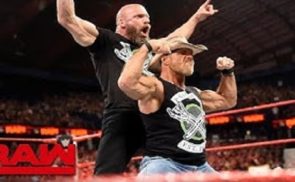