It’s title time as we have a pretty big main event with North American Champion Carmelo Hayes defending against Johnny Gargano and Pete Dunne. NXT has a good history of setting up these title matches and then making them work, so hopefully they remember how to make it work. Let’s get to it.

We open with Grayson Waller in the ring, talking about how great of an NXT Champion Tommaso Ciampa really is. Waller goes on about the fans booing everyone, including John Cena and Roman Reigns, but those two are at the top of the game. It’s like people with 80,000 tweets and 3 followers don’t matter! Cue Ciampa to cut Waller off and we’re ready to go.

Non-title. Ciampa isn’t having this and stomps away in the corner. A running knee puts Waller on the floor but he comes back in with a jumping neckbreaker. Now it’s Waller stomping away in the corner until Ciampa is back up with a boot out of the corner. Waller grabs a spinebuster into a modified People’s Elbow, which only hits mat. A clothesline puts Waller on the floor and there’s the throw over the announcers’ table so Ciampa can applaud himself.

We take a break and come back with Ciampa kneeing Waller out of the air, followed by a DDT for two. Waller grabs a spinebuster for two but Ciampa catches him on top. A super Air Raid Crash gets two but Waller catches him with a spinebuster for two. Ciampa is sent outside for the big flip dive but he catches Waller with the Willow’s Bell on the way back in. The Fairy Tale Ending finishes Waller at 13:37.

LA Knight doesn’t think much of Grayson Waller, because the fans were chanting WALLER SUCKS. That’s not an insult, but just a fact of life. Joe Gacy comes in to talk about how bad that is so they agree to meet in the safe space. Knight: “You make it sound like such a perverted thing, you freak.” The match is on for later.

Toxic Attraction isn’t looking forward to having to face Cora Jade. Dakota Kai comes up next to them and seems to be a bit crazy. Mandy Rose: “At least she’s on our team.” They find a bunch of destroyed stuff but keep walking, with Kai breaking another glass. Kay Lee Ray pops up with a baseball bat, apparently having smashed everything.

Here is a depressed Cameron Grimes, still with the shorter hair. Grimes talks about growing up in a very small town in North Carolina. Every day, he would have people push him down and tell him he wasn’t good enough. Grimes kept fighting and coming up because he would never quit and now he has made it. The entire time, he kept his hair and beard to remind himself of what he went through. Duke Hudson took all of that away last week and embarrassed him.

Hudson messed up though because he made Grimes angry. He wants Hudson down here right now because the talking is done. Hudson, in a barber’s chair, pops up on screen to ask why Grimes should be mad at him. Last week, Grimes took a lot of money from him and got a free haircut. All Hudson is trying to do is make Grimes a decent human being, so Grimes says come down here and let’s finish this. That’s not happening, so Grimes makes a better offer: let’s go all in, with hair vs. hair at WarGames. Hudson is in, and holds up Grimes’ hair in a bag.

Indi Hartwell says Dexter Lumis has a broken hand and is out for a month. He can’t even draw, but she’s still ready to have her tag match tonight. This one is for Dexter, but Persia Pirotta pulls her to the ring.

Carter and Catanzaro come through the crowd for their energized entrance. Persia shrugs Carter off to start and hands it off to Hartwell, who seems a little distracted. Hartwell shoves her way out of the corner but gets taken down by Carter in a hurry. Catanzaro comes in off a blind tag and is suplexed into a moonsault for two on Hartwell.

It’s back to Pirotta to drop Catanzaro face first on the top, setting up a tilt-a-whirl backbreaker. Hartwell stops to look at her ring finger before hitting Carter with a side slam. That means another look at the ring finger, allowing Carter to grab a crucifix for two of her own. Carter splashes Hartwell for the fast pin at 3:35.

Andre Chase gives his students a tour of Chase University facilities when they run into Cameron Grimes. Chase calls him a teachable moment and Grimes doesn’t seem pleased.

Escobar takes him to the mat to start but Blade slips out of a suplex. Blade grabs a sunset flip for two, earning himself a forearm to the face. Back up and Escobar sends him into the corner, setting up the Phantom Driver for the pin at 2:27.

Post match Legado del Fantasma gets in the ring, where Elektra Lopez says Xyon Quinn turned them down. They never needed him anyway, but here are Von Wagner and Kyle O’Reilly to interrupt. They’re here for the same reason: they want the Tag Team Titles (which Legado never mentioned) and Wagner’s foot was on the rope in their match. Imperium pops up to shout about how the little children are fighting amongst themselves. Imperium announces a #1 contenders match and the winners can get a shot at WarGames.

Raquel Gonzalez barges into the women’s locker room and nearly gets in a fight. Cora Jade tells them to get it together for WarGames, but they need a fourth to go along with Io Shirai. They can figure that out while she goes to fight Mandy Rose.

Tony D’Angelo’s money is on Carmelo Hayes tonight and suggests putting some bets on the match.

Non-title. They fight over a lockup to start with Jade grabbing a quick rollup for two. A running knee in the corner is countered into a spinebuster to give Rose her own two though and she plants Jade again for a bonus. Back up and Jade snaps off a running hurricanrana for two, only to miss a middle rope dropkick. Cue Kay Lee Ray with her baseball bat, which is smashed into a variety of things. The distraction lets Jade grab a rollup for the pin at 4:02.

Carmelo Hayes and Trick Williams are ready for the triple threat. Johnny Gargano and Pete Dunne are chasing him and he won’t miss.

Joe Gacy is ready to make the ring a safe space. Harland puts his hand on Gacy’s shoulder.

Kay Lee Ray comes up to Cora Jade, Raquel Gonzalez and Io Shirai. Ray will be their fourth member at WarGames, and she’ll be in the advantage ladder match next week too.

Cue Grayson Waller to jump Knight from behind though and they fight to theback.

Gacy talks about anger management but here is the Diamond Mine to interrupt. That sends Gacy into a rant about weight shaming with the Cruiserweight Title but Roderick Strong says he’ll face Gacy anyway. Malcolm Bivens says the match will be made, but here is Harland to scare Diamond Mine off.

MSK continues on their quest but get pulled over for driving seven miles an hour. They’re worried about the contents of their bag but are allowed to go.

Nile takes her down and does pushups on Leon’s back. Leon fights up and works on the arm but Nile is back with a heck of a clothesline. A triangle choke is eventually broken up so Leon tries a rollup, only to get reversed into a dragon sleeper for the tap at 2:44.

The Grizzled Young Veterans are planning something but get broken up by an LA Knight/Grayson Waller brawl.

Boa can’t control his evil but once he does, you will fear him.

Drake gets sent throat first into the middle rope for a pair of right hands to start. There’s a big left hand to put him down again but Zack Gibson asks for some time before a right hand. A blind tag brings in Gibson to jump Jensen from behind and we hit the chinlock. We cut to LA Knight and Grayson Waller STILL fighting in the back as Gibson cuts off Jensen’s tag attempt.

That lasts all of a few seconds as it’s off to Briggs to clean house in a hurry. Drake gets backdropped and claims a knee injury but Briggs has to go after Gibson. Drake’s knee is fine enough to try a kick to the ribs, which is easily caught. Briggs and Jensen go high/low to finish Drake at 4:26.

Hayes is defending. Dunne gets dropkicked to the floor start, leaving Gargano to dropkicks Hayes. Back in and Dunne runs Hayes over, with Gargano taking Dunne’s place. Everyone is back inside so Dunne can half crab them both. That’s broken up as well so Hayes springboard body blocks Dunne for two before hammering on Gargano. Johnny fights out of the corner and this a bulldog/running clothesline combination to take both of them down. Gargano hits a dive each onto Dunne and Hayes, setting up a running hurricane to Dunne.

We take a break and come back with a circle slugout until Hayes gets knocked into the corner. Hayes gets the better of things and sends Gargano to the apron, where scores with the slingshot spear. The Patter End is countered into a DDT for two on Dunne. Stereo kicks to the head rock Hayes but he’s back up to suplex Dunne onto Gargano. Back up and Gargano runs both of them over, setting up the Lawn Dart to Hayes. Dunne comes back in and hits the Bitter End, but here is Tony D’Angelo to break up the cover. D’Angelo sends Dunne into the steps and the top rope ax kick gives Hayes the retaining pin at 11:23.

Post match the big beatdown is on with LA Knight and Grayson Waller joining in. The villains get the better of things and Gargano’s hand is loaded up for the Pillmanization. Cue Tommaso Ciampa with the chair to break everything up. The fans want the DIY reunion and the fans chant for WarGames….but here is Bron Breakker to join the villains. Breakker: “WARGAMES!!!” The brawl is on again as the sirens go off to end the show. 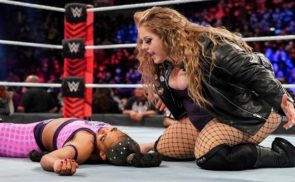