It’s a special show as we have Roadblock, because this company likes to hit you over the head with the Road To Wrestlemania, or in this case Stand & Deliver, idea. The main event is a triple threat for the NXT Title between champion Bron Breakker, Dolph Ziggler and Tommaso Ciampa, but we are also going to get more of the women’s Dusty Classic. Let’s get to it.

The opening video looks at the triple threat title match.

Choo takes Jade down for some peek-a-boo and we pause so she can take a nap, with commentary whispering. An elbow misses for Gonzalez but she grabs an airplane spin to put Choo in trouble. Jade’s running elbow in the corner gets two but Choo drives her into the other corner. Kai elbows her down and starts alternating stomping/choking in the corner. It’s back to Choo for an elbow but Jade blocks some suplexes attempts.

Jade gets sent to the apron for a baseball slide to the floor from Choo. Kai goes out after her but Gonzalez joins them to glare. Cue Toxic Attraction to take out Kai’s leg with a club, plus send it into the post as we take a break. Back with Gonzalez not being able to get up on the apron as Jade clotheslines Choo. Kai comes back in and gets kicked in the face, allowing the tag to Gonzalez.

That earns her a kick to the face but Kai starts hearing Voices before trying the running boot in the corner. The Chingona Bomb is loaded up but Gonzalez’s knee gives out. Now the running boot connects and Choo hits her top rope Vader Bomb into a top rope double stomp (which did not look to connect very well) from Kai for the pin at 13:58.

Tommaso Ciampa is ready to win the NXT Title for the third time. Dolph Ziggler and Bron Breakker can fight it out to be 2A and 2B, but there has never been a bigger gap between #1 and #2.

The Creed Brothers have been attacked in the parking lot.

Raquel Gonzalez gets checked out in the back.

Stratton grabs a front facelock to slow Henley down to start but stops to check her nails. Henley fights back but gets muscled up into a Samoan drop. Some smoke starts to go off at the entrance though and here is Sarray to knee Stratton in the back of the head. Henley hits a Shining Wizard for the pin at 2:43.

Brooks Jensen and Josh Briggs come out to celebrate with Henley.

Andre Chase yells at some of his students for screwing up last week. Bodhi Hayward did his job, even if he winds up with a black eye. One student asks about Hayward’s bad eye. Chase: “Jamie when did you graduate and become a f****** doctor?” Threats are made and Jamie leaves.

We go to the barber shop, where Carmelo Hayes and Trick Williams are happy with what they are doing. Hayes is ready for his ladder match at Stand & Deliver but Williams is worried. Don’t worry though, because Melo don’t miss.

And now, the return of Lashing Out with Nikkita Lyons as this week’s guest. Legend recaps Lyons’ backstory, with Lyons talking about how her mom taught her not to be judgmental. Legend isn’t convinced and they argue about each others’ looks. Time is up though and arguing continues.

Imperium denies having anything to do with the Creed Brothers being attacked. MSK comes in to say they’ll take the shot if the Creeds can’t go.

Josh Briggs and Brooks Jensen accuse Legado del Fantasma of attacking the Creeds. Elektra Lopez: “Don’t go accusing me because you can’t get laid.” Jensen says he’s working on it but Fallon Henley wonders if Briggs and Jensen actually did it. Of course not!

Last Man Standing. Knight jumps him in the aisle to start and the fight is on, with Waller being sent into the steps. They head inside for the first time, with Knight catapulting him throat first into the bottom rope. Waller is fine enough to hit a hot shot and kick Knight into the corner to take over. A neck snap across the top rope sets up the rolling Stunner for a seven count so Waller elbows him in the face.

Waller goes up top but Knight runs the corner and hits a superplex. The BFT plants Waller but he gets to his feet and hits a trashcan shot as we take a break. Back with the two of them fighting on the balcony until Knight knocks him off and into the abyss. Knight heads to the ring and it’s Sanga carrying Waller, who is mostly out of it. A chair to the back does nothing to Sanga, so he chokeslams Knight onto the apron. Some handcuffs come out but Knight cuffs Sanga around the post.

That means a jumping neckbreaker and slam can put Waller down as the fans want a table. Waller goes to the eyes and tries another rolling Stunner, only to be tossed over the top and through a ringside table. That’s not enough to finish Waller so Knight grabs a chair, which he throws back down to kick Waller in the chest instead. A trashcan is put over Waller, leaving Knight to go and beat on Sanga with the chair. Waller fights back and hits Knight with….something, setting up a top rope elbow through the announcers’ table. They’re both down but Waller uses Sanga to pull himself up and beat the count at 16:12.

Bron Breakker talks about what the NXT Title means to him and how much it motivates him in the ring. He is running through the roadblock.

Tony D’Angelo is in a restaurant and promises to become the new Don of NXT at Stand & Deliver.

Toxic Attraction is watching from the balcony, where Malik Blade and Ednis Enofe have beaten up their waiters and taken their place. Ray and Carter start things off with Carter getting the better of things, meaning Cataznaro can come in. Catanzaro and Shirai trade rollups for two each and it’s a big staredown in the middle. Carter and Catanzaro clear the ring and we take a break.

Back with Carter hitting a running shot to Shirai in the corner, allowing Catanzaro to come back in for a faceplant. Shirai hits a quick dropkick for two on Carter as everything breaks down. The neckbreaker/450 combination is broken up so Carter gives Ray a doomsday poisonrana, with Ray landing SQUARE ON HER HEAD. Shirai has to shove Carter into the corner for the break and thankfully Ray can still walk. Ray is up with the KLR Bomb to Carter, setting up the Moon Over Moonsault for the pin at 11:10.

Cora Jade jumps Mandy Rose as payback for Raquel Gonzalez getting jumped earlier in the night.

Indi Hartwell and Persia Pirotta, with Duke Hudson, argue over who cost them their Dusty Cup match. A match is set up, with Hudson offering to help Pirotta train. She shoves him against the locker and kissing ensues.

MSK is challenging in place of the injured Creed Brothers. Carter kicks Barthel in the face to start and it’s off to Lee for two off a rollup. Aichner comes in to slam Lee legs first into the ropes. It’s back to Carter, who gets chopped and clotheslined down to set up a chinlock. Carter fights up and kicks Barthel down, allowing the hot tag off to Lee to clean house. A moonsault sends Barthel outside and Carter hits a dive but Lee’s is cut off Aichner. Cue the Creed Brothers to beat up both teams for the no contest at 5:32.

Result: MSK vs. Imperium went to a no contest when the Creed Brothers interfered (5:32)

Post match the beatdown is on, with Aichner nearly getting dropped on his head off a German suplex.

Draco Anthony and Harland have a staredown but Joe Gacy tells Anthony to let more people in. Xyon Quin comes in to tell Anthony to be his own man, with Gacy telling Anthony to think about it more. They’ll be waiting.

A-Kid is coming from NXT UK to NXT.

Breakker is defending and Ciampa gets knocked outside early. Back in and Breakker suplexes both of them down at once, with neither of them landing at the same time. This time it’s Breakker being sent outside, leaving Ziggler to get clotheslined down. Breakker gets back up so Ciampa clotheslines both of them over and over until Ziggler superkicks Ciampa to break up a diving…I think clothesline?

We take a break and come back with Breakker grabbing the Recliner on Ciampa but Ziggler puts Breakker in a sleeper to cut him off. The Fameasser and Zig Zag get two on Ciampa, leaving everyone down. Ciampa loads up Project Ciampa on Ziggler, sidesteps Breakker who completely mistimed the spear, and drops Ziggler for two.

Breakker is back in with a spear on Ziggler and the gorilla press powerslam connects, only to have Robert Roode run in and pull the referee out. Willow’s Bell and the Fairy Tale Ending hit Breakker, with Ziggler running in to throw Ciampa off and get two. Roode pulls Breakker out of the way of Ciampa’s running knee though and it’s a superkick from Ziggler to pin Ciampa for the title at 12:27.

More On What To Expect From Vince McMahon At WrestleMania 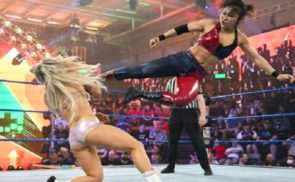