It’s the go home show for Stand & Deliver and the card is all but set. We still have some matches that need a final push though and that is where this week’s show comes in. If nothing else, there is one spot left in the North American Title ladder match and it gets filled in this week. Let’s get to it.

Knight and MSK jump Imperium from behind to start and they start fast, with Knight and Barthel trading wristlocks. Barthel gets taken down and MSK hits a neck crank into a basement dropkick. A cheap shot finally takes Knight down though and Barthel kicks him in the chest. The fans want Gunther and receive him almost immediately, with some kicks tot he back keeping Knight in trouble. It’s already off to Aichner for a slam into the ropes for two and the beating villains continue their alternating beatdowns.

Knight finally fights his way over to the ropes for the tag to Lee. Everything breaks down and Carter hits a dive, leaving Knight to stare Gunther down. We take a break and come back with Knight and Barthel coming in off the double tag, allowing Knight to clean house in a hurry. The big jumping elbow gets two, with Aichner making the save. Carter hits a running dropkick in the corner as Knight and Gunther fight into the back. That leaves Aichner to kick Lee in the face and blast Carter with a clothesline for the pin at 12:11.

Io Shirai and Kay Lee Ray are ready to win the Women’s Title, even if it means beating one another. Ray throws out some good luck in Japanese, which Shirai returns in English.

Earlier today, Ivy Nile told Tatum Paxley to work harder if she wants to be in the Diamond Mine.

Stratton takes her down without much trouble and hits the standing moonsault for two. Nile is right back up with a clothesline and Stratton backs off. That doesn’t last long as Stratton sends her into the ropes for a running hip attack to the back. A headlock takeover doesn’t last long on Nile so Stratton sends her face first into the mat. Nile is ticked off though and hits Stratton in the face. A running shot in the corner sets up a double arm crank until Nile sends her face first into the mat. Stratton is ticked off and comes back but here is Sarray for a distraction, allowing Nile to grab the dragon sleeper for the tap at 3:26.

Tommaso Ciampa is in his usual spot in the back and talks about how this is his place to connect with the people. The people and NXT have been his haven through a lot of troubles, including five miscarriages (egads) before his miracle daughter was born. They created the Black and Gold together, but now they are going to do it one more time. Ciampa stands up and the dates 9/9/15 – 4/2/22 (his debut to his final match) are written on the chair.

We get a video on Dolph Ziggler’s accomplishments in WWE.

Ziggler talks about coming to NXT as usual, but this time he is going to be staying a bit longer. He has been doing this time after time and how everyone wants him for media because everyone knows who he is. We see some clips of Ziggler’s path here as he talks about how everyone KNOWS Bron Breakker is taking the title from him at Stand & Deliver, just like the KNEW he would do it at Roadblock. He’s the star, and he’ll prove it again. Good video here, but it feels like Breakker’s likely title win would mean a lot more if he was winning it for the first time rather than regaining it.

Video on Cora Jade, talking about how she wanted to win the title and be like other NXT Women’s Champions (“Charlotte….don’t really like her”). She even has her notebook from high school where she wrote about wanting to follow her dreams as a wrestler instead of taking notes in math class. Yes the odds are against her, but she was never much for math anyway.

Elektra Lopez and Fallon Henley are the seconds. Barrett talks about how Jensen’s love life can get him in trouble, allowing him to reference Will Smith. Briggs throws Wilde into the air for a crash onto the mat to start, followed by a fall away slam to make it worse. Briggs comes in but gets kicked in the ribs by Mendoza. A springboard is cut off though and Briggs drives him into the corner, setting up a double shoulder.

Jensen gets knocked outside though and Wilde hangs sideways off the post before dropping straight down into a splash. Some running corner clotheslines knock Jensen silly again and a double suplex gets two. The chinlock is broken up though and the hot tag brings in Briggs to clean house. Lopez offers a distraction though, allowing Legado to knock him down. Henley goes after Lopez and Wilde’s 450 is cut off with a grab of the throat. The chokeslam sets up a high/low for the pin on Wilde at 5:36.

Indi Hartwell and Persia Pirotta argue over their respective men and agree to a Texas sized showdown in Dallas, as judged by the NXT Universe. That’s going to be stupid isn’t it?

Cameron Grimes is nervous about his last chance match tonight because he needs this. Grimes wants to make his promise to his father come true.

Here is Toxic Attraction for a chat. Mandy Rose isn’t happy with Io Shirai and Kay Lee Ray adding themselves to the Women’s Title match but no she is not scared or worried. The three of them have dominated the women’s division for six months so now it is time to do it again at Stand & Deliver. Before we get there though, we have to talk about Wendy Choo and Dakota Kai, who failed in the finals of the Dusty Classic. They pull some of Choo’s stuff out of their backpack, revealing that the three of them took her out.

There is no one left to go after them and they are THE attraction around here. Cue Dakota Kai to go after them but the numbers game takes her down. That brings out Raquel Gonzalez for the real save and Toxic Attraction bails. Kai and Gonzalez have the big reunion and seem to be the next challengers as they hold up the titles.

Carmelo Hayes and Trick Williams are excited for the ladder match when Grayson Waller and Sanga come in. Waller is ready to take the title but Hayes says he goes viral just by showing up. Glaring ensues.

Robert Stone and Andre Chase are here as seconds and Jacket Time is doing their own commentary. Hayward knocks him down to start but hold on as we cut to the attractive woman who has been appearing as of late. Jacket Time loses their mind over her as Wagner takes over inside with some shoulders to the ribs in the corner. Hayward comes back with a running forearm but gets caught in a fall away slam. Wagner misses a running boot in the corner though and Hayward hits a running shoulder to put him down. Hayward isn’t having that though and runs him over, setting up something like a release AA for the pin at 3:41.

Tony D’Angelo is ready to take Tommaso Ciampa out of the chain and give him his last match in NXT. Then D’Angelo is taking over NXT as the new don.

Harland is here with Gacy, who shoulders Draco down to start. Back up and Anthony grabs an armdrag but stops to stare at Harland. That lets Gacy come back with a DDT and a chinlock, with trash talk included. Said trash talk lets Anthony…well nothing actually as Gacy hits a swinging Rock Bottom. Anthony fights up and hits a running elbow in the corner, setting up a suplex for two. Gacy slips out of another suplex (with Anthony falling down), followed by the handspring lariat to finish Anthony at 3:56.

The Steiner Brothers are going into the Hall of Fame, allowing commentary to say that Rick Steiner is Bron Breakker’s father.

We get a video on Bron Breakker, who talks about how this is the biggest match of his life. His first title win was about proving himself but then he lost the title in a big surprise. Dolph Ziggler is here but he leaves as fast as he can every time. NXT is Breakker’s life and at Stand & Deliver, Ziggler has nowhere to run and hide.

Lyons slams her down to start but Jacobs is back with a Codebreaker to the arm. A suplex drops Jacobs though and there’s a Samoan drop to make it worse. Some kicks to the head set up the splits splash to finish Jacobs at 1:46.

Post match Lash Legend pops up to rat at Lyons and a challenge is issued for sometime after Stand & Deliver.

Malcolm Bivens promises that the Diamond Mine is going to win everything at Stand & Deliver. The Creeds are left alone and get a text from whoever attacked them, saying they’ll be watching on Saturday. The area code is 781, which is from Boston (not mentioned here).

The winner is in the North American Title ladder match. They all start fast with each one having to make a save. Strong can’t get a Boston crab on Grimes but A-Kid can’t get his sleeper. Grimes misses the Cave In, giving us a three way stand off. A monkey flip sends A-Kid into a hurricanrana to take Strong down and a dropkick puts Strong into the corner. Back up and A-Kid springboards into a wristdrag/headscissors combination to put the other two in trouble as we take a break.

Back with Carmelo Hayes on commentary and the rest of the ladder match entrants appearing to watch. Strong powerbombs A-Kid onto Grimes but can’t get a double Stronghold. Grimes is back up with a high crossbody on Strong and a swinging Side Effect on A-Kid. It’s A-Kid back on his feet to spike Grimes with a DDT and everyone is down. The three way slugout is on with Strong getting the better of things and powerbombing A-Kid onto Grimes. The End of Heartache drops A-Kid but Grimes hits the Cave In for the pin on Strong at 10:53.

Post match everyone involved in the ladder match promises to be champion, triggering a huge brawl to end the show. 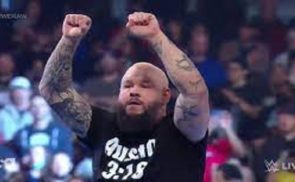