It’s the Great American Bash due to reasons of….I’m not sure why we needed a special show this week but that’s what we have here. The card is stacked as you might expect, with a main event of Kyle O’Reilly vs. Adam Cole II. Other than that, the biggest deal is Johnny Gargano and Karrion Kross talking, as I’m not sure why the title match isn’t taking place here. Let’s get to it.

The opening video looks at the card, of course featuring comments from Dusty Rhodes.

Thatcher and Ciampa are challenging. Ciampa shoulders Carter over to start but a headscissors sends Ciampa into the corner. It’s off to Thatcher for a chinlock/ripping at Lee’s face before Ciampa grabs his own chinlock. Lee fights up and gets over to Carter to kick Ciampa out to the floor. That means a middle rope moonsault but Thatcher shoves Ciampa out of the way to take the shot himself. Ciampa runs Carter over and applauds himself as we take a break.

Back with Carter getting taken into the wrong corner so the beating can continue. Ciampa slaps him in the face and hits a jumping knee to put Carter down again. Carter fires himself back up and gets over for the hot tag to Lee, who ducks a shot from Thatcher to take Ciampa out. Ciampa tags himself back in though and Project Ciampa gets two on Lee. The Fairy Tale Ending is blocked and the now legal Thatcher gets knocked around again, including into the corner for another tag to Ciampa.

The super Air Raid Crash is broken up and some running shots in the corner put Ciampa down. Carter hits a near fall into the Final Flash from Lee but Thatcher breaks up the pin. The spike Fairy Tale Ending sets up the ankle lock on Lee but Carter shoves Ciampa into them to break it up. Lee small packages Thatcher to retain the titles at 15:25.

William Regal and Samoa Joe are in the ring with Regal telling Johnny Gargano and Karrion Kross to get to the ring. Both come out and Gargano gets to the point by telling Kross (sans Scarlett or big entrance) that he sucks. Gargano knows he is in Kross’ head and there is a lot of room in there. Regal isn’t wasting time and says this has to be settled, so the title match is on for next week. Kross says he is bigger than Gargano, but he has bigger convictions too. When he wakes up, he thinks of three things: never lose the NXT Title, main event Wrestlemania and win the WWE Title.

What does Gargano do when he wakes up? Put on a pair of his wife’s jeans? Kross says this isn’t a comic book or a cartoon and people like him beat people like Gargano. Regal isn’t done, as Samoa Joe is going to be the guest referee next week. Gargano says it’s funny that Kross mentioned his wife, because Kross couldn’t lace her boots. Kross goes after him but Samoa Joe gets in their way.

Grimes is challenging but he becomes Knight’s butler if he loses. Grimes wastes no time in sending Knight outside for the big penalty kick from the apron. Back in and a heck of a high crossbody gets two on Knight, followed by a hard headlock. Knight gets away and heads to the apron for the slingshot shoulder but Grimes forearms him out of the air. The standing moonsault gives Grimes two and we hit the chinlock, complete with some knuckles to Knight’s nose. Back up and Knight almost drops him off a powerslam but gets two anyway as we take a break.

We come back with Grimes fighting out of a chinlock and hitting the flipping belly to belly for two. Something like a very nasty Side Effect gives Grimes two more but Knight is right back with a Burning Hammer for two of his own. Frustration is setting in so Knight grabs the title and is caught almost immediately.

Grimes rolls him up but Knight reverses into a rollup of his own with trunks for two. A poisonrana gives Grimes two but the threat of the Cave In sends Knight outside. Knight sweeps the leg to send Grimes onto the apron and a DDT onto the title knocks Grimes silly. That’s good for a VERY close nine and Knight, already celebrating on the middle rope, is stunned. The BFT finishes Grimes at 13:13.

Dakota Kai and Raquel Gonzalez are sick of Shotzi Blackheart and Ember Moon. It is time to get rid of these two for good.

Here are the Breakout Tournament participants:

No brackets are revealed but the tournament begins next week.

Zoey Stark/Io Shirai vs. The Way

The Way is defending. Shirai hits a running dropkick to take out Indi Hartwell’s knee, followed by a running dropkick to the ribs. A missile dropkick gives Shirai two and it’s off to Stark, who is sent hard into the corner as we take a break. Back with Stark fighting up and kicking Hartwell in the head, setting up the double tag. A flapjack plants LeRae and there’s the 619 to knock her silly again.

Shirai gets two off a springboard missile dropkick and it’s back to Stark for a running knee to the head. The Moon Over Moonsault misses though and we go to double submissions from the champs. Those are both escaped and LeRae is knocked down again, only to break up Moon Over Moonsault.

A German suplex gets two on Shirai and it’s back to Hartwell for a spinning belly to back slam. Frustration is setting in so it’s back to LeRae, who gets small packaged for two. The lights go out though and the battery finishes charging revealing…..TEGAN NOX. The distraction is enough for Shirai to dropkick LeRae outside, leaving Stark to hit the K360 for the pin and the titles at 12:14.

Toni Storm isn’t happy that Sarray is challenging her. Storm has had more matches in Japan than Sarray has had hot dinners so of course Sarray wants the match. But no, it isn’t happening.

During the break, Dexter Lumis helped Indi Hartwell out.

It’s time for Hit Row’s big celebration of Isaiah Scott winning the North American Title last week. With Ashante Adonis playing the music, B-Fab raps about how awesome the team is with Top Dolla following up by saying it is time for them to get their gold. Finally, Isaiah Scott speaks so fast that I can’t quite follow what he is saying. Speaking at a more normal speed, Scott says that he worked hard to get here and now he is champion. They head to the ring to keep rapping and say their name a lot until we cut away.

William Regal and Samoa Joe recap the night, with Samoa Joe saying he’ll be impartial next week if he is not physically provoked.

Cole takes him down to start but O’Reilly takes over without much trouble. That’s enough to send Cole outside and we take an early break. Back with Cole having to block an armbar so O’Reilly grabs an ankle lock instead. That sends Cole bailing to the ropes in a hurry and this time he knocks O’Reilly outside in a hurry. Back in and Cole grabs a neckbreaker for two and the Figure Four necklock goes on.

Cole’s fireman’s carry is broken up with some elbows to the face and a knee to the ribs cuts him down. The rolling butterfly suplex into the double arm DDT give O’Reilly two but Cole is right back with a Backstabber for the same. Cole: “I’m better than you O’Reilly. Always have been and I always will be.” That’s enough to make O’Reilly snap and he hammers away on Cole in the corner.

Cole slips out though and a superkick to the leg takes O’Reilly down again. The leg is wrapped around the post and we take a break. Back with a double clothesline putting both of them down for a breather, but Cole is up first with a half crab over the ropes. O’Reilly gets in a shot to the leg of his own but neither can hit a suplex. Cole’s running knee to the face gets two and the frustration is turned up.

The Panama Sunrise is blocked and Cole’s knee is banged up again. O’Reilly kicks away again and they’re both down. Back up and O’Reilly kicks away to set up the cross armbreaker. That’s broken up so O’Reilly grabs a small package for two. The heel hook is blocked though and Cole reverses into a Figure Four. That’s reversed as well and this time it’s O’Reilly getting in a weird heel hook.

Cole grabs a role of his own for the break and the fans declare this awesome. O’Reilly knees him in the face and kicks him in the head, only to get enziguried. That’s not enough to put Cole down though and O’Reilly hits a running knee, only to fall outside off the momentum. Panama Sunrise on the floor knocks O’Reilly silly for two back inside. 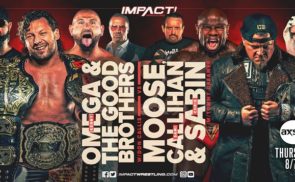