It’s a big night as the main event will feature Karrion Kross defending the NXT Title against Johnny Gargano. This comes amid rumors that Kross is on his way to the main roster so we could be in for some serious fireworks tonight. Other than that, it’s time to begin the Breakout Tournament. Let’s get to it.

In Memory Of Paul Orndorff.

We open with a recap of the Great American Bash and the setup of the title match.

Raquel Gonzalez is here with Kai, who grinds away with a headlock to start. A running shoulder drops Moon as well but she armdrags Kai into an armbar. Kai pops up with a kick to the face but Moon sends her outside for a ram into the barricade. That earns him a kick from the apron as we take a break.

Back with Kai throwing her down again, only to have Moon nip up for an enziguri. A springboard spinning crossbody gives Moon two but Kai’s backbreaker gets the same. Kai goes up and gets kicked in the face, allowing Moon to hit a top rope hurricanrana for two. Moon is sent to the apron, where Kai pulls her over the top for the GTK and the pin at 12:59.

Post match Kai poses with Gonzalez but here is Xia Li to say she wants Gonzalez’s Women’s Title. Gonzalez is down.

Malcolm Bivens talks about how great the Diamond Mine is and issues an open challenge. Bobby Fish pops up to say he’s in to face Roderick Strong. Bivens switches that over to Fish vs. Tyler Rust instead.

Ikemen Jiro says don’t let his good looks fool you, because he can beat you up. He was trained by Tajiri and Great Muta so he knows how to fight.

Earlier today, Cameron Grimes showed up to start as LA Knight’s butler and doesn’t mind that he showed up late. He’s here because of his pride because he gave his word, but first up it’s time for a makeover. The beard and hair are adjusted and Knight even has a uniform for him. Grimes likes the look and it’s time to go to work. More on this later.

Rust starts in on the arm and strikes away, setting up a Figure Four necklock. Back up and Fish punches him down, setting up a kick to the chest. Roderick Strong gets on the apron for a distraction but Fish knocks Rust outside anyway. The distraction lets Rust get in a chop block though and a kick to the head finishes Fish at 2:39.

POst match the Diamond Mine surrounds Fish but Kushida runs in for the save.

Samoa Joe comes up to Karrion Kross, who threatens him if he messes with the title match.

The Way arrived earlier today and Beth Phoenix asked Indi Hartwell what happened with Dexter Lumis. That would be nothing, but they both seemed to want it to. Beth tells her to take a chance.

Sarray grabs a wristlock to start but Dolin reverses into one of her own. A running armdrag into a headlock takeover has Dolin down again but here is Mandy Rose of all people to watch. Sarray grabs the leg and slaps on a Muta Lock, which she just lets go. That leaves Dolin to grab some rollups for two each, followed by an STO for the same. Sarray is back with a running dropkick against the ropes, setting up a MUCH harder one to knock Dolin silly. A high collar suplex (nearly dropping Dolin on her head) gives Sarray the pin at 3:31.

Duke Hudson is ready for Ikemen Jiro. You can either call him Duke or just cut tot he chase and call him the Breakout Tournament winner.

The rest of Legado del Fantasma is here too. Escobar runs him over to start but Lumis nips up to scare him a bit. Back up and Lumis runs the ropes, setting up the Thesz press to hammer away. That’s enough for Escobar to need a breather on the floor but Lumis uses the distraction to slide underneath the ring. Lumis tries to pull him under but has to settle for just crawling out for the glare as we take a break.

Back with Escobar hitting a basement dropkick to the side of the head and hitting some running clotheslines in the corner. Lumis fights up with some right hands and it’s a clothesline into a bulldog. The Silencer is loaded up but the rest of Legado makes a save. The distraction lets Lumis gets posted, allowing Escobar to hit the Phantom Driver for the pin at 9:18.

Post match Legado runs into Hit Row for a showdown with trash talking.

Earlier today, Kyle O’Reilly sat down with Wade Barrett and said that unfortunately, losing is a part of life. That was the case last week against Adam Cole, but now he isn’t sure if he needs his soul back. He needs to get his groove back and he is willing to do what it takes to finish Cole.

Back at Knight’s estate, LA Knight has Cameron Grimes mow his rather large lawn with an old a rather ancient push lawnmower. Grimes talks about his grandmother chasing him with one like this but Knight doesn’t want to hear it.

During the break, Indi Hartwell tried to carry Dexter Lumis off but couldn’t hold him up. The kiss was imminent but Candice LeRae broke it up.

Hudson is formerly known as Brendan Vink and Jiro has wrestled on 205 Live for a few months. Jiro’s jacket, which he wrestles in, is universe themed but he gets shoved down to start anyway. A cartwheel and some flips have Hudson a little confused, as does Jiro’s headstand in the corner. Hudson gets him on his shoulder for a knee to the head and then drops Jiro down onto the top rope.

Some stomping in the corner has Jiro in more trouble but he gets in a few shots to the face (with jacket) to stagger Hudson. A few more right hands put Jiro in trouble again but he hurricanranas his way out of a Razor’s Edge. That’s enough to send Hudson outside for a top rope Asai moonsault but Jiro bangs up his ankle. Back in and Hudson hits a swinging Boss Man Slam for the pin at 5:28.

Pete Dunne wants the winner of tonight’s title match but Timothy Thatcher doesn’t like Dunne calling himself the best technician in NXT. Tommaso Ciampa runs in to start the brawl with Dunne and Oney Lorcan.

Jessi Kamea kicks Catanzaro into the corner and it’s off to Aliyah for a hair toss. Catanzaro gets up some boots in the corner to cut off Aliyah though and dives over for the tag to Carter. Everything breaks down and Catanzaro dives onto Kamea on the floor. That leaves Aliyah to get caught with the 450/neckbreaker combination for the pin at 3:30.

Post match Robert Stone checks on Aliyah, who shoves him away and shouts that she has done more for him than he has ever done for her. She slaps Stone in the face and beats the fire out of him, drawing a heck of a reaction as a result. Aliyah leaves as Frankie Monet comes out to look at Kamea. Stone crawls up the ramp as Kamea leaves with Monet.

Samoa Joe comes up to Johnny Gargano to protect himself at all times and obey his commands. Gargano is cool with that, just like Austin Theory is cool with the new Way shirt. Joe leaves and gets into a staredown with Pete Dunne.

Cameron Grimes is sitting by the pool because, as a fellow millionaire, he has hired a kid to mow the lawn for him. LA Knight is furious and sends the kid away so he gets kicked in the shin. That makes Knight drop his money, so Grimes sweeps it up, knocking Knight into the pool in the process.

Here is Adam Cole to say that Kyle O’Reilly needs to rethink that rematch idea. Anyway, it’s time to move on to Samoa Joe, who choked him out from behind a few weeks ago. Joe is a security guard in a suit and Cole knows no one in the back is man enough to face him. Cue Bronson Reed, who doesn’t have the North American Title anymore but he’s still ready to fight. Cole’s superkick is blocked and Reed runs him over, sending Cole outside. Cue Samoa Joe for the main event and the staredown with Cole is on.

Frankie Monet and Jessi Kamea are leaving with Robert Stone catching up to them. Mandy Rose pops up to say it looks like the brand is under new management.

Kross, with Scarlett, is defending and Samoa Joe is referee. Gargano goes right after him to start but gets knocked down in a hurry. Some dropkicks tot he back put Kross on the floor though and a running flip dive from the apron drops Kross again. A missed charge sends Kross shoulder first into the steps but he is fine enough to drop Gargano onto the announcers’ table.

We take a break and come back with Kross being sent shoulder first into the post. Gargano kicks him outside but this time Kross comes back in with a suplex to take over. Back up and Kross hits a hard lariat but Gargano grabs a tornado DDT out of the corner. A chokeslam cuts off Gargano, who is right back with a superkick. The Krossjacket is escaped with a backflip and the Gargano Escape has Kross in trouble for a change. That’s countered as well and Kross grabs the Krossjacket again. Gargano makes the rope but Kross won’t let go, earning a break from Joe (his first important moment in the match).

They head outside with Gargano being rammed into the barricade. Kross loads up the steps but Joe takes them away and gets in Kross’ face. The distraction lets Gargano hit a DDT onto the floor. One Final Beat gets two but Kross hits him in the face. A powerbomb into another doublebomb into a triplebomb into a Doomsday Saito has Gargano mostly done. The running forearm to the back of the head retains the title at 12:47.

Result: Karrion Kross b. Johnny Gargano – Running forearm to the back of the head (12:47)

Post match Kross gets in Joe’s face again but Joe goes to walk away. Kross jumps him from behind and chokes him out to end the show. 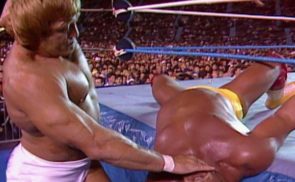