Finn Balor is back tonight and it’s already time for him to go after his NXT Title again. Balor lost the belt a few weeks back at a house show to new champion Samoa Joe, meaning Finn’s target should be obvious. Other than that it’s time to really hit the gas on building towards the next Takeover which is scheduled for about a month from now. Let’s get to it.

We open with a video on Finn Balor, talking about how the title is his obsession before the loss to Joe. I believe this aired last week as well. Balor may have lost the title but it’s time to embrace the demon inside.

Here’s Finn to open things up. After a THANK YOU FINN chant, Balor thanks the fans and talks about how the matches with Joe could have gone either way but he won the first two. Before he can talk about what happened in the third match, Elias Samson comes out to sing about Balor’s masquerade being exposed. Samson says Finn is nothing without the title so Balor kicks him in the head to put Elias outside. The guitar goes flying but Samson makes the catch.

Last week, Eric Young called himself a world class maniac who is so glad to finally be here in NXT.

Non-title. Chad takes Skyler to the mat to start and we get the Kurt Angle themed chant. Hollis comes in and gets headlocked down as well before we hit the seated armbar. It’s off to Jordan who easily throws Hollis into the air for a face first crash onto the mat. A double hiptoss puts Hollis down and there’s a double dropkick for Skyler as this is completely one sided so far.

Hollis finally realizes that he can cheat and the jobbers take over on Gable for the first time. Skyler drops a knee for two and we hit the chinlock. That works for all of five seconds before it’s off to Jordan as house is cleaned. Cue the Revival on the ramp for a distraction but Grand Amplitude puts Hollis away at 5:10.

Shinsuke Nakamura is asked what he thinks about Alex Riley’s rage. Nakamura starts shaking, like he has rage you see.

Riley had been calling himself the white lion down in NXT, at least until he got released a few weeks after this. Riley goes right after him to start but Nakamura easily swats him away. Nakamura misses a knee though and Riley hammers away, earning himself a string of knees and forearms to the ribs and face. The running knee in the corner sets up the inverted exploder suplex, followed by Kinshasa to put Riley away at 2:38.

Austin Aries is in William Regal’s office to say he wants to prove he’s the best. Blake and Murphy come in to talk about being disrespected. Aries: “You don’t even have the decency to bring Alexa Bliss with you?” Bliss comes in and yelling ensues so Regal makes Blake/Murphy vs. Aries/a partner of his choice next week. Aries pulls out his phone and implies he knows someone.

That would be Paul’s daughter. Bliss starts on the arm by bouncing it off the mat and working on an armbar. A forearm gets two on Rachel and it’s back to the armbar. The comeback goes nowhere as Bliss does the psycho eyes choke to set up the Sparkle Splash for the pin at 3:52.

Bayley says she’s getting ready for her rematch when Nia Jax interrupts. She learned from the loss to Bayley but it’s clear that Bayley has learned nothing from losing the title. A challenge for a rematch is issued and Bayley says she can choke Nia out again.

Bayley vs. Nia is official for next week.

Just regular Finn here and his shoulder is taped up. Feeling out process to start until Balor knocks him to the floor and takes us to a break. Back with Balor holding an armbar and the fans saying it NEEDS MORE COWBELL. Samson fires off some forearms but Balor just blasts him in the face a few times. Some running chops in the corner put Samson on the floor for a baseball slide. The Sling Blade sets up 1916 for the pin on Samson at 7:47.

Balor says he wants his rematch for the title because it belongs to him. Now he’s possessed like a demon stalking his prey so here’s Samoa Joe to interrupt. Before it can get physical, Regal comes out to make Balor vs. Joe III for Takeover on June 8. That’s really rare for NXT as they almost never have feuds go on this long. Joe yells a lot so Balor dives over the top to take him out. 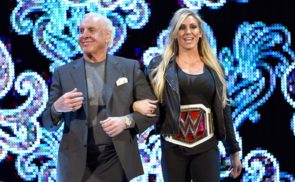 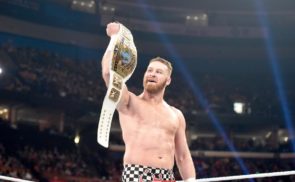