It’s the week after Takeover and possibly the last taping cycle before the Brand Split really screws things up. Not a lot of major changes took place last week aside from new Tag Team Champions as Revival took the belts back from American Alpha in a pretty surprising upset. Next up is Brooklyn in August so let’s get to it.

We get a We Stand With Orlando graphic.

The Authors of Pain are the monsters who attacked American Alpha last week and have Paul Ellering (who somehow looks younger than he did when he first came to the WWF in 1992) in their corner. The announcers have no names for the jobbers, who are run over at the bell to start. To be fair they don’t have individual names for the Authors either with one of them being referred to as the Tattooed One.

Some hard knee strikes have the first jobber in trouble before it’s off to the other one for more of the same. The non-tattooed Author throws one jobber into the other and it’s a side slam/big boot combo for one and a running clothesline/Russian legsweep combo to the second for the pin at 1:36.

Andrade Cien Almas is happy with his win last week when Tye Dillinger comes in to interrupt. Dillinger: “Now listen up you six.” A rematch is requested and seems to be granted.

Ellering is asked what he and the Authors are doing here but he’ll only say “in due time”.

Carmella grabs a quick rollup for two to start and a dropkick makes things even worse for Tessa. Blanchard drops her with a forearm and asks how the fans are doin. A legsweep doesn’t work though as Carmella dances away, only to get caught in an abdominal stretch. Carmella just blasts her with a right hand to the jaw, followed by a superkick to set up the Bronco Buster. A Downward Spiral into the Code of Silence (that leg crossface) is enough to put Tessa away at 2:47.

After last week’s cage match, Samoa Joe says he destroyed his brother and hunted a demon around the world to get his title. This cage match ended all the questions and officially started the reign of Joe. No one can take it from him.

Blake and Murphy say there were no problems until Murphy started causing the issues. The blame seems to go towards Alexa Bliss but they agree to get their Tag Team Titles back.

TM61 vs. Blake and Murphy

It’s now TM Six One instead of TM Sixty One. The fans want to know where Alexa is. Blake and Thorn start things off with Shane nipping up out of a wristlock before it’s off to Miller for a shot to the face. A slingshot hilo gets two for Thorn and a standing moonsault/jumping fist drop combo gets the same on Murphy.

Murphy comes back with a clothesline, which Graves thinks could have taken out Lord Humongous. We hit the chinlock on Thorn for a bit before it’s time for the heel miscommunication as Blake clotheslines Murphy by mistake, which allows the hot tag off to Miller as everything breaks down. Murphy is sent outside and Thunder Valley (a double gorilla press slam) puts Blake away at 5:37.

Revival said they told you so and now have their titles back. Dawson: “Clink me Jack!” That means bang the titles together.

The announcers talk about Bobby Roode debuting in the UK over the weekend.

We look at Bayley injuring her knee against Nia Jax.

Bayley has a doctor’s appointment next week and if she’s cleared there, she can get back in the ring.

Takeover rematch and Dillinger is still crazy over. The fans start the dueling chants with something about one hundred and then a much louder PERFECT TEN response. Almas flips over the top rope to start and a springboard cross body sends Tye outside. Back in and Tye takes over, only to run into a dropkick to send him outside again so Almas can do his pose in the ropes as we take a break.

Back with Almas getting two off a sunset flip and slapping on an armbar. Tye gets free and they run the ropes, only to have Almas dropkick Dillinger as he tries to drop down. Dillinger gets one off a backbreaker and some crossface shots to the face have Almas in more trouble. Back up and Almas hits some forearms to the face and a spinwheel kick, followed by a dive over the top to take Ty out again. A Rey Mysterio sitout bulldog sets up the double running knees in the corner to give Almas the pin at 10:48.

Here’s Finn Balor to address the crowd but first he has to soak up a THANK YOU FINN chant. That switches to a PLEASE DON’T GO before Finn starts talking about watching NXT in Ireland and wanting to be a part of that. He became a part of NXT but it became a part of him as well. Finn was NXT Champion for 292 days (YOU DESERVE IT) and he went to wars with Neville, Tyler Breeze, Kevin Owens and Samoa Joe. At the end of it though, he’s not the champion. Now the question is what’s next for him. Fans: “BALOR CLUB!” Finn: “Too sweet!”

Balor asks what’s next for him again…..and here’s Shinsuke Nakamura. They shake hands and the fans instantly think this is awesome. Nakamura says when he was in Japan, he watched Balor become the icon of NXT but now he’s no longer champion. Balor is still an icon though and if Nakamura wants to be champion, he has to beat the icon. The fans lose their minds over that and start the MATCH OF THE YEAR chant. Balor says that’s the answer to what’s next for him so the match is on at some point in the future. 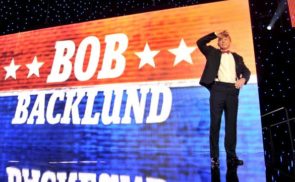 KB’s Review: In Other More News 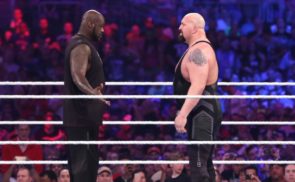