This is another interesting show as it’s a combination of the regular taping and the NXT Title match from Osaka, Japan with Shinsuke Nakamura challenging Samoa Joe for the title. It’s also nearly time to start getting ready for Takeover: San Antonio, which is only about six weeks away. Let’s get to it.

We open with a quick video hyping up the title match.

Here’s DIY to get things going with the new champs coming in through the crowd to celebrate. It takes some time for the cheering to die down but Paul Ellering and the Authors of Pain cut them off before anything can be said. Ellering talks about how awesome they are until the Revival cuts them out with the fans singing their song. Revival gets to ringside and says the Authors only won because Revival was out of the tournament. The Authors come down to shove Revival around with Ellering saying they’re coming for the titles.

We’re getting a new commentators and it’s…..Percy Watson.

No Way Jose/Rich Swann vs. Sanity

It’s Alexander Wolfe and Eric Young for the team here. There’s no Sawyer Fulton here and Eric stomps on Fulton’s jacket in some symbolism. Swann and Jose go fast to start by knocking Wolfe out to the floor.

Swann gets taken into the Sanity corner and it’s time for an early break. Back with Swann taking a Bret Hart chest bump in the corner and getting caught in a dragon sleeper from the middle rope. Wolfe comes in for his version of dancing and a neck crank to keep things slow.

A double clothesline gives Swann a breather and sets up the hot tag. Jose comes in  and gives Young a TKO for two. A big corkscrew dive sends Swann into Wolfe but here’s a huge man to send Jose into the steps. The announcers acknowledge him as Damo (formerly Big Damo) as he stares Wolfe down. Back inside, Young’s wheelbarrow into a neckbreaker ends Jose at 10:35.

Sanity looks at Damo, who leaves on his own.

William Regal makes Revival vs. DIY for the titles on January 11. Tye Dillinger comes in to suggest he should leave NXT after losing to Samoa Joe. Regal cuts him off and offers him a spot in a tournament to crown a new #1 contender. There will be four singles matches with the winners facing off in a four way match for the title shot in San Antonio. This changes Dillinger’s mind.

Eric Young has nothing to say about Damo but Nikki Cross runs into Asuka and stares at the title. Asuka gives her the evil smile.

Lee is a former Chikara Grand Champion. Moon wastes no time in starting in with the kicks but charges into a side suplex for two. A hurricanrana gets Ember out of trouble and the Eclipse ends Lee at 3:03.

Here are the matches for the #1 contenders tournament:

Joe is defending and is quickly kicked into the corner for Good Vibrations. A poke to the eye gets the champ out of trouble and we take a break. Back with Nakamura in an STF which is turned into a Crossface which is turned into a rope grab. A German suplex looks to set up Kinshasa but Joe snaps off a powerslam for two instead.

Nakamura gets out of the Muscle Buster, only to get caught in the Koquina Clutch. It’s the standing version though and Joe releases for a string of suplexes instead. Joe kicks him out to the floor and loads up the Rock Bottom onto the steps. That earns him a bunch of strikes to the back and neck as Nakamura takes over for a change. Back in and Nakamura can’t keep him up in a fireman’s carry. Instead he goes to the middle rope so the middle rope knee to the head can set up Kinshasa for the pin and the title at 10:45 shown.

We’ll actually see the cage rematch from Australia next week on NXT. 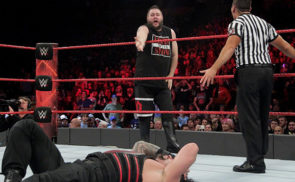 Owens vs Reigns Is a Better Feud On Twitter Than TV 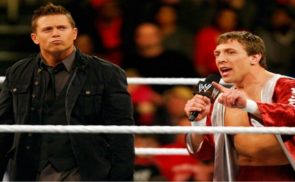 KB’s Review: YES! He Should Be Champion