We’re on the road to Brooklyn and most of the card can be seen from here. With just three shows left, it’s time to add some build to a lot of the midcard matches as the main event is pretty much set. There’s a good chance we’ll be seeing more of Charlotte vs. Bayley tonight as Bayley is aiming for the Women’s Title again. Let’s get to it.

In memory of Roddy Piper.

After a handshake, Bayley grabs a headlock and takes Charlotte over, only to have Charlotte nip up to her feet. A hammerlock and headscissors earn similar results for Bayley but Charlotte comes back with the rolling figure four headscissors to put Bayley down hard. Things get a bit more aggressive as Bayley scores with some ax handles to the chest, only to get kneed in the face for two.

Back from a break with Bayley countering the Figure Eight into a small package for two of her own, followed by the middle rope elbow to the jaw. Bayley lifts her up onto the top rope for a hurricanrana, dubbed awesome by the fans. They slug it out (fans: “WOMEN’S WRESTLING!”) and a spear gets two for Charlotte. Charlotte gets the Figure Eight but Bayley is too close to the ropes.

We get a sitdown interview with Kevin Owens, who doesn’t like Michael Cole implying that his apology for jumping Finn Balor and William Regal wasn’t sincere. Regal said he wanted to see Owens lose and it takes a real man to say that behind someone’s back. “Or a real man’s man should I say.”

Owens needs the NXT Title back, not just because it’s worth more money, but because it reminds him of what he did to Sami Zayn and he likes that feeling. However, he’s scared of Regal screwing him like Montreal, which is where Owens is from after all. Therefore, why not make the rematch a ladder match? Cole asks if Owens can beat Balor and Kevin walks off.

Bull Dempsey doesn’t like the video of him trying to get in shape last week and wants to do it right. This doesn’t go well either but it’s to be continued.

Corbin wins with End of Days in 22 seconds.

Bayley comes in to see William Regal and nervously asks him for a Women’s Title match. Regal thinks she deserves one, but so does Becky Lynch. Therefore, next week it’s Bayley vs. Becky for the shot at Sasha in Brooklyn. Regal throws in that Bayley is his niece’s favorite wrestler.

Breeze stomps Solo down in the corner to start, then pounds him down on the mat, then hits the Beauty Shot for the pin at 52 seconds.

Uhaa Nation video, who is now known as Apollo Crews. His debut is in Brooklyn.

Finn Balor gets a sitdown interview of his own and talks about what an honor it is to be NXT Champion. He’s known Kevin Owens for about a year now and after getting to know him, he really isn’t surprised by what happened at the contract signing. Owens may be a man of words, but Balor is a man of actions, and Owens’ actions don’t back up his words. Sami Zayn has been helping Balor get ready for the title match and Finn doesn’t care if it’s a ladder match, a cage match or a street fight, because he’s going to prove that Tokyo wasn’t a fluke. When asked if the Demon will appear, Balor gives a vague “we’ll see.”

Dash and Dawson vs. Hype Bros

Mojo and Dawson get things going with Rawley cranking on a wristlock and bringing in Ryder for the double knees in the corner. We get a WOO WOO WOO chant to the New Day rhythm but a Dash distraction lets Dawson pull Ryder off the middle rope and take over. Ryder takes a quick double teaming before slipping over for the hot tag to Mojo. Rawley cleans house and holds up Dash for the elevated Rough Ryder and the pin at 3:33.

Dash and Dawson beat up Ryder post match and lay him out with the Shatter Machine.

The Vaudevillains are given a rematch for the NXT Tag Team Titles in Brooklyn. Regal advises them to come up with a way to counter Alexa Bliss.

Bull Dempsey has some more success with his training and seems to be making progress, even being able to turn over a big tire.

Joe fires off right hands to start but Rhyno rams him face first into the buckle. That’s fine with Joe who sends Rhyno outside and scores with the suicide dive. Back in and the corner enziguri drops Rhyno again but he comes back with a spinebuster as we take a break.

After the commercial it’s Joe coming back with an STO, earning him a TKO for two. Joe’s middle rope boot to the face puts Rhyno down but he grabs a belly to belly. The Gore hits a boot so Rhyno settles for a clothesline for two instead. Rhyno makes the mistake of going to the middle rope, earning himself another enziguri and the Muscle Buster for the pin at 12:57. 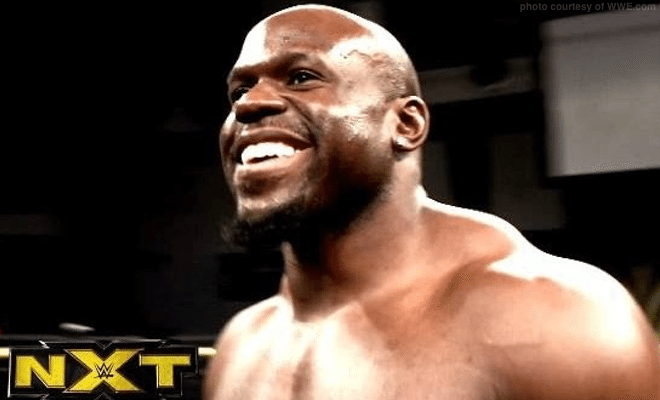