NXT In Your House 2022 Preview, Predictions And Thoughts

This is the kind of show that NXT needs every now and then and thankfully they haven’t gone too nuts and done them every month. At some point you need to have a big, special show and this time around you have a fairly stacked show. Granted the main event might not be the most exciting, but at least the show is taking place. Let’s get to it.

This is one of those matches that is made a bit more interesting by the fact that Toxic Attraction has lost the titles before. As a result, it means that another loss is not out of the question, which opens up some doors. Granted I don’t know how wide those doors are, but at least there is an option. Toxic Attraction has held the titles longer than anyone in history, with their reigns lasting all but three days since late October. That’s quite the target and that should be a good thing here.

I’ll go with Chance/Carter to win here, as they are one of the only women’s teams in all of NXT. Someone has to take the titles from Toxic Attraction and they have held the things long enough. Let Chance and Carter finally win the things so they can start what should be a path to the main roster. There is enough talent there to make it work and I could go for the title change here, as it is fairly overdue.

The turf war continues and this time the losers have to join the winners’ team. That makes for some…possibilities, though I’m not sure I would call them interesting. This story hasn’t been for me, but maybe the match can work out well enough. If nothing else, Santos Escobar should be good enough to carry a lot of the load and I’m sure there will be some shenanigans going on.

I don’t see any reason for Legado to win here so we’ll go with D’Angelo and company wiping them out. After spending what feels like years doing the same thing, there isn’t much of a point in keeping Legado around. Odds are the big united team doesn’t last long, but for now that is the direction they go. D’Angelo is in an interesting spot as they seem to want to push him, but the character is so over the top that it is hard to see how far it could go. It’s good enough to win here though.

I know I might be in the minority but I still like Pretty Deadly. They’re the perfectly annoying champions that you want to see get hit in the face and have their titles taken away but they manage to squeak by. That is a team that can work in a lot of spots and they are working well enough here. The problem this time though is that the Creed Brothers need to actually win the things at some point and I’m not sure if they do here or not.

While there is a possibility that the Creeds lose the title due to some shenanigans and get thrown out of Diamond Mine as a result, I think they go another way. I’ll go with the Creeds winning the titles here and walking out on Diamond Mine as a result, as it gives them the best of both worlds. The Creeds are at the point where they have to win at some point or none of what they do matters so let them win here and get one up on Roderick Strong for a bonus.

I’ll continue to be the one who can’t have any fun and whatever other negative things can be said, but I cannot bring myself to like Choo. It’s too much with the goofy and the annoying and the costume and everything else. That SIGN THE CONTRACT bit from NXT was more than I could handle and I can’t manage to want to see her win the title. Choo is a talented person and what she is having to do isn’t her fault but I can’t go with it.

As a result, I’ll take Rose to retain, which might be due to the sake of false hope. Rose has held the title for about seven months now and has to lose it to someone, but I don’t think I could handle her losing it to Choo. The problem is, I’m not sure who else can take it from him, but I’ll go with Rose keeping the title here, if nothing else for the sake of my own sanity.

Now this is the one that has me interested, as Grimes can work well with anyone and Hayes is about as smooth as you can get in an NXT ring. These two and Solo Sikoa have turned out to be one of the better things going at the moment and I could go with seeing more of any combination of them. Grimes has to beat Hayes at some point if he wants to be an established champion though and now he has his chance.

While I think there is a chance that Hayes takes the title here, I’ll take Grimes to retain here, if nothing else for the sake of continuing to build him up. Hayes is someone who could go a long way, while Grimes’ future is a bit harder to pin down because of how over the top he is. What matters is that there is a good chance this steals the show and I’m wanting to see how it goes.

Please let this be it. This has been one of the most WWE feuds that I can remember in a long time, as it wasn’t an interesting idea in the first place and then they kept going with it over and over, which has turned it into a total mess. Breakker has hit an absolute wall with this story and the thing just won’t end, as Gacy now has minions. The last thing I want to see is more Gacy, which has me scared of how this is going to go.

I’ll say Breakker retains here, but that might be the false hope talking. I have no desire to see this match and I don’t care about the whole deal with Breakker’s anger, but this feud has already dragged on beyond Breakker winning, making me wonder why it’s still here. Just get this over with already, as long as Breakker retains because I can’t take more of Gacy doing anything.

This show really doesn’t sound very interesting and I’m not sure how much I want to see it. There is the chance for multiple title changes, but what matters most is that NXT is having the show. They need to get out there and feel like a bigger deal at some point and that is what they are doing here. Now just don’t do anything stupid here and let things move on towards whatever is next around this place and we should be fine. 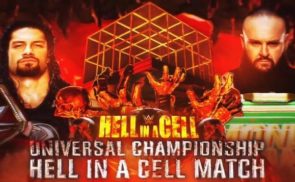